Nelliyampathy: A Gem in the Western Ghats 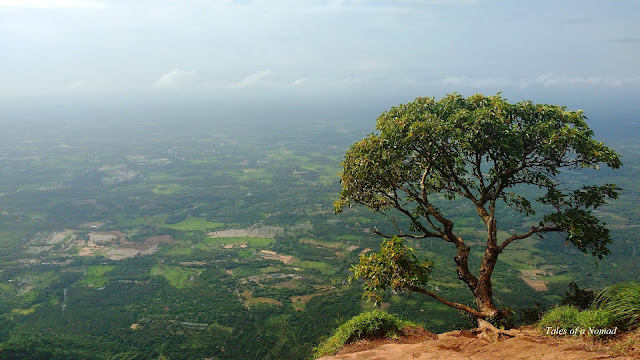 “Do you know who’s come to visit us early in the morning?” asked my Dad and I jumped out of the bed to open the door. It was a sambar deer cosily curled up just outside our room. It was deep asleep as the woods were waking up to the morning mist and drizzle. We couldn’t have expected a bigger surprise than this visitor at our door step at Greenland farm houses in Nelliyampathy.

Tucked away from the plains of Palakkad, Nelliyampathy is a lovely little hill station nestled in the Western Ghats at a height of more than 4500 feet above sea level. This gem of a place gets its name from the gooseberry trees that were predominant here long back. Laced with tea, coffee and orange plantations, Nelliyampathy is an absolute delight during the monsoon when it showcases various shades of green apart from numerous small waterfalls.

A detour from Vadakkancherry, and we were snaking our way past the road side shops and the town of Nenmara to Pothundy, the tiny hamlet at the base of Nelliyampathy. Pothundy dam and a well maintained garden is the highlight here. Built in the 19th century, the dam is fed by the tributaries of Bharathapuzha and is the source of irrigation for agricultural regions of Palakkad apart from providing drinking water to the surrounding areas. A steep flight of steps past the garden led us to the panoramic views of the reservoir. Placid waters of the reservoir are engulfed by green hills and despite the blazing sun, the breeze blew cold. Strolled around for a while taking in the gorgeous vistas and then walked down to go up the hills. 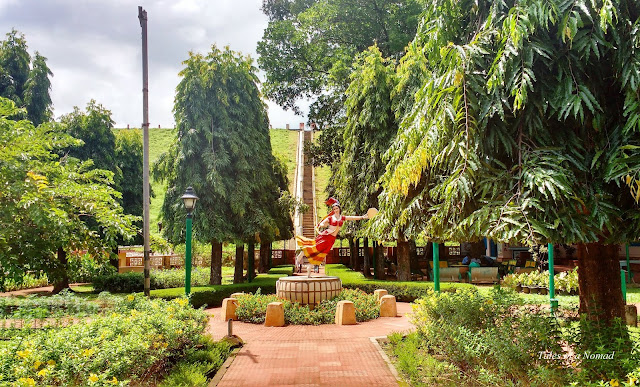 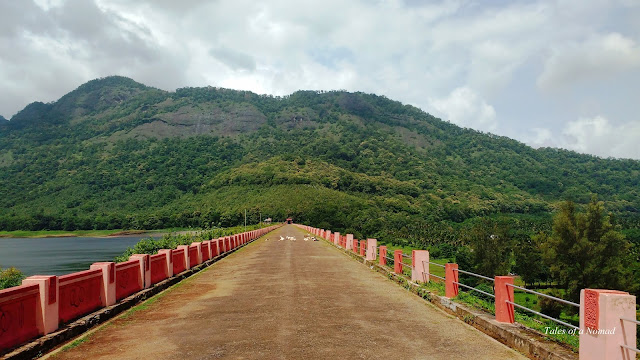 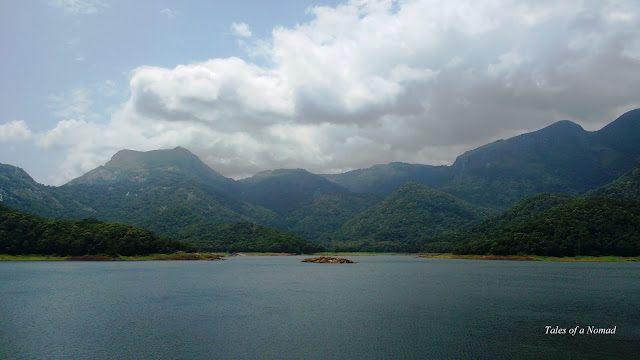 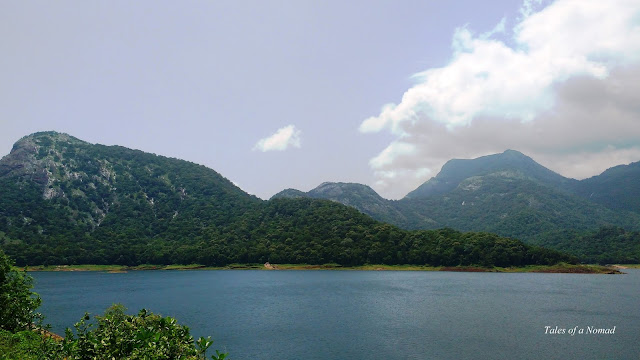 Past the check post which showed up immediately after the dam, the road serpentined its way past fallen trees, mudslides, numerous tiny waterfalls and vantage points. Shrouding mist and incessant drizzle further accentuated the charm of the drive all the way.  Nenmara waterfalls is a fairly large one which you would spot on the way. Splashing and tumbling over rocks, the water gushed through the thick forest green. The large moss laden boulders which offered a better view looked a bit slippery and I watched the falls from a distance. Pothundy reservoir popped up frequently amidst the lush greenery as we drove up. The vantage points offered magnificent views of the mist engulfed hills and the green valley below. 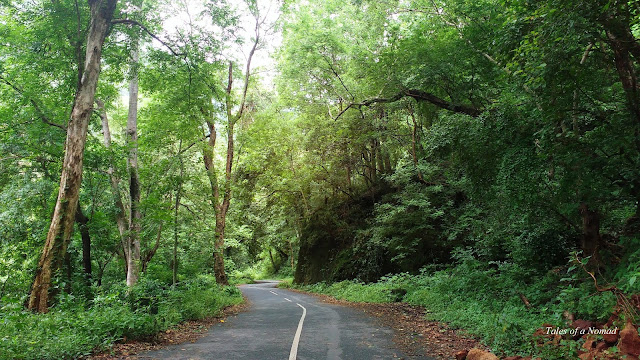 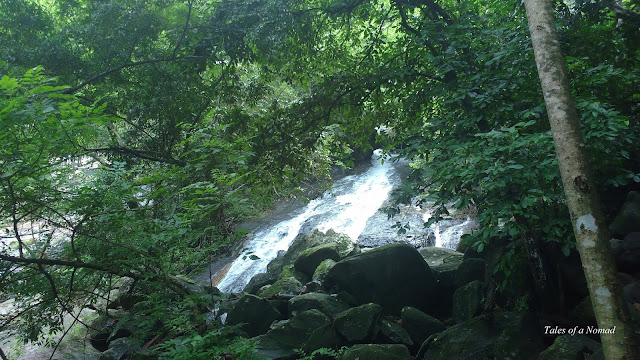 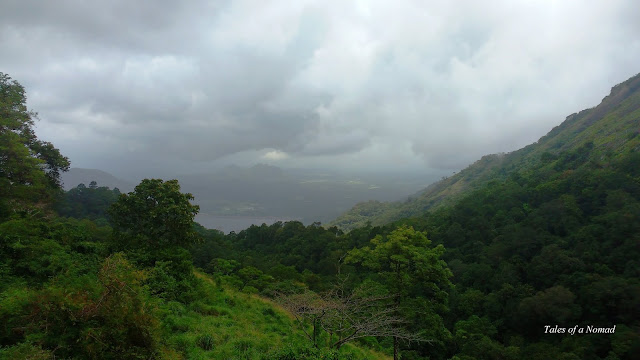 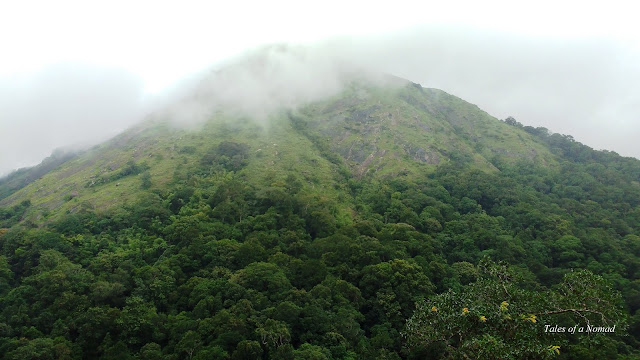 As we neared Kaikatty, a small village before Neeliyampathy, vast tea estates on low lying hills showed up. Coffee plantations too are prominent in this area. A couple of kilometers along the winding road and we were at Nelliyampathy, no bigger than Kaikatty with a few shops, small eateries and a couple of hotels.  Greenland farm house, where we were to stay is further 7 kms from Nelliyampathy near Palagapandi. A quick lunch later, we headed out to explore this lovely hill station.

Seetharkundu, a view point near Palagapandi is one of the major attractions in Nelliyampathy. It is a short walk past a tea estate that leads to this lovely vantage point. The path led us to an opening and without a cue, gorgeous views of the plains of Kollengode town and the surrounding regions lay before us. Endless stretch of forest canopy and paddy fields in multiple shades of green offer a picturesque frame from this point. Kollengode hill looms tall on one side apart from the endless vistas. We walked along the ridge of the hills taking in the gorgeous frame. The jutting lone trees are a favourite with photographers.  It is believed that the place gets its name from the fact that Seetha rested here while on exile as mentioned in Ramayana. 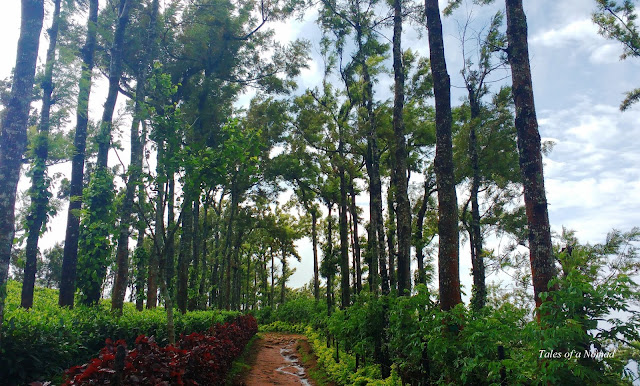 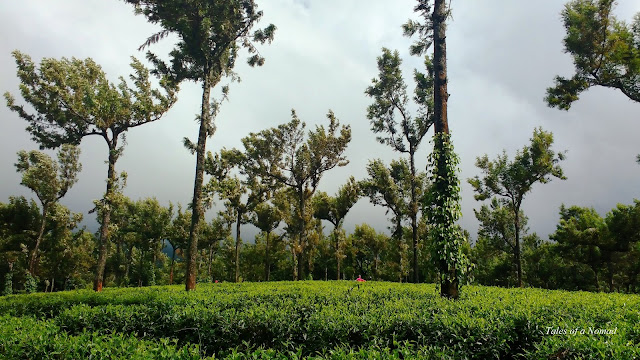 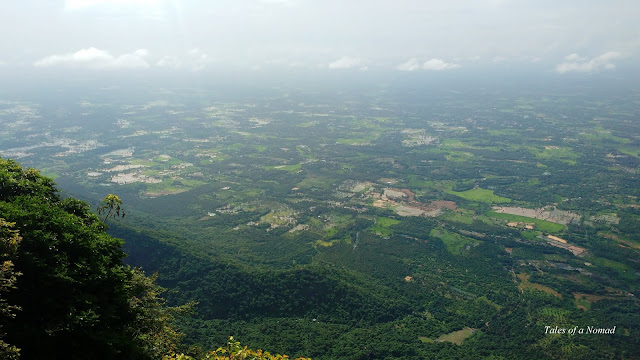 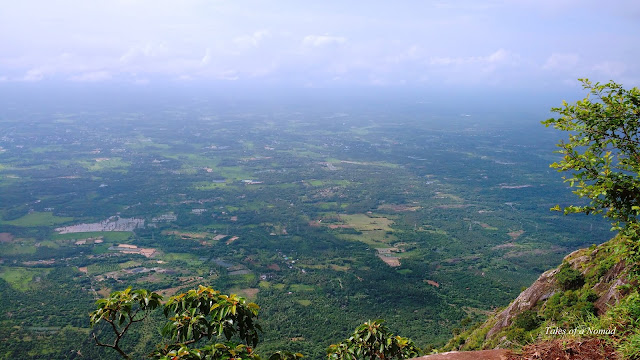 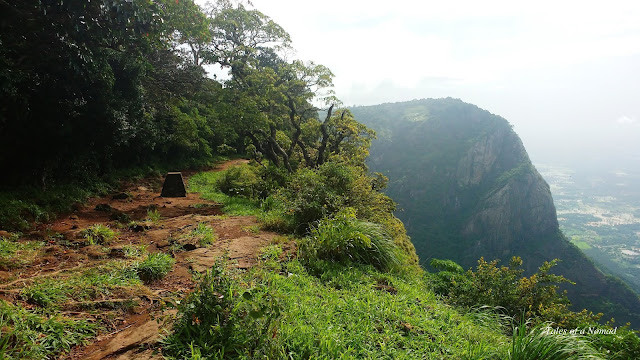 It was almost dark when we reached back our room. At sharp 7 pm, the jeep that was to take us on a night safari honked outside the room. It was raining and though we contemplated about the safari, we were soon on our way past the estate boundaries into the fringes of the forest. The incessant rains had made the mud road slushy and the streams that cut across the road had swelled up too. We were apprehensive throughout the safari as it was an adventurous and slippery ride on a slushy narrow dirt track.  Our cool driver cum guide was quite an expert in such situations and he carefully manoeuvred the vehicle through the forest. The ditches seemed like half dug trenches and each time the jeep’s tyre dipped, we had our hearts in our mouths. In between all the adventure, we sighted two sambar deer and a couple of spotted deer by the road which ran into the darkness when the headlights flashed. It seemed like we had hit the end of the road when the jeep stopped at the base of a large rocky hill. While I was thinking about the return, the jeep surged ahead at 45 degrees onto the top of the hill. More fun to follow as we rode up and stopped atop the flat headed hill. Kollengode village looked gorgeous in that pitch darkness and rain. Our driver mentioned that the hill was known as Cheriya Mampara and is an ideal place for photography if not raining. We headed back on the same mud track and were back at the farm house before the stipulated time of one hour as my parents found the ride a bit too adventurous.  It was a delight to wake up next morning and find a sambar deer sleeping outside our door. Apparently, Greenland farm house is located next to the forest reserve and there are two sambar deer who frequently visit their premises. 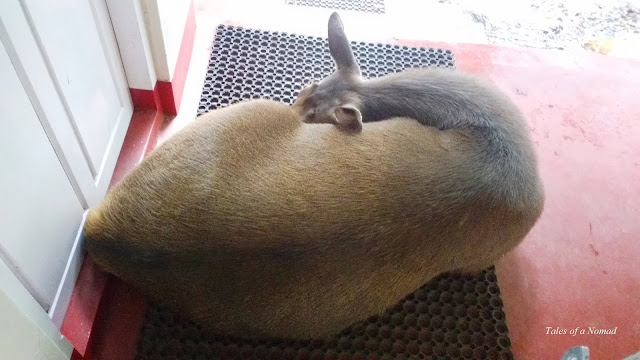 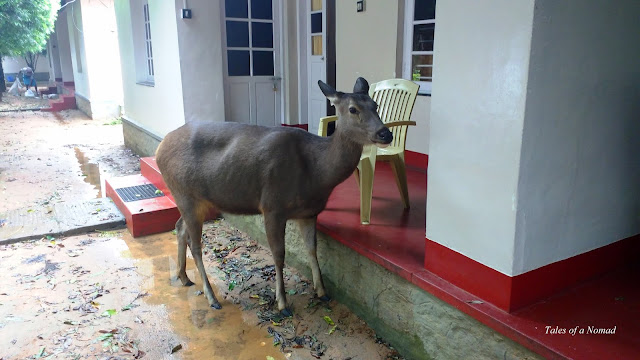 A delicious breakfast later we headed to Keshavanpara, another view point which is a detour from Kaikatty junction. From the main road, it’s a nice little stroll through lush greenery on a narrow pathway to Keshavanpara. A large rocky hill stood at the end of the trail. Climbed up and the views were stunning with a panoramic view of Pothundy dam, green valley and intimidating hills. Mist intermittently engulfed the place and the sky turned dramatic as we returned shortly. There is also a small pond atop the hill apart from an old dilapidated water storage tank. 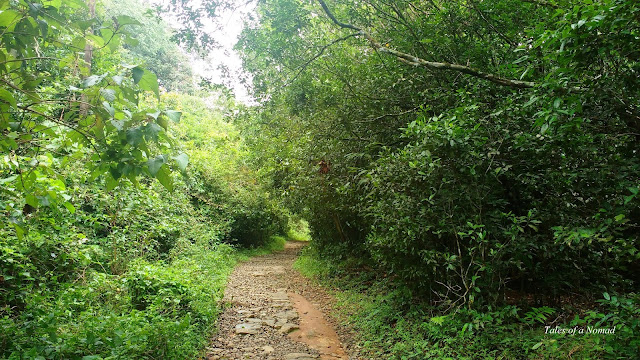 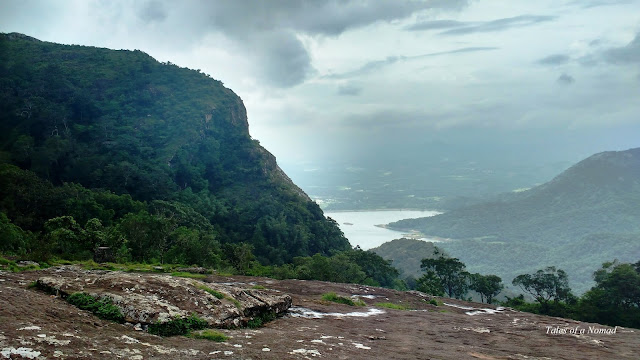 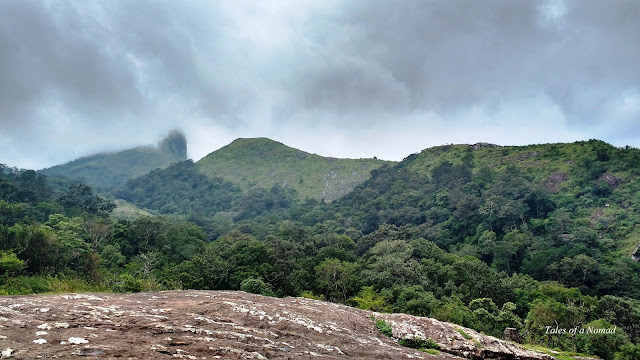 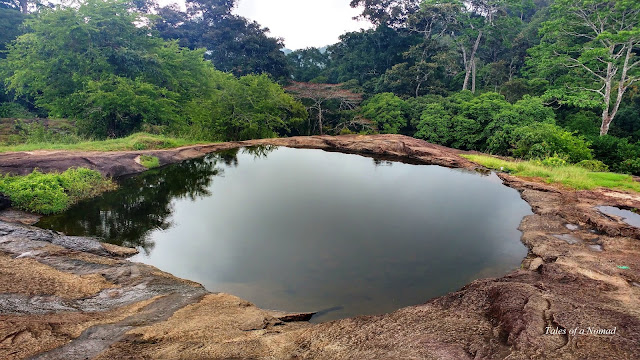 Further ahead of Keshavanpara, the road snaked its way past large tea plantations and turned narrower as we headed to Karappara. There were forest patches too and a large stream ran parallel to the road for a long period. There is hardly any civilization beyond Keshavanpara except for the plantations workers and a couple of small junctions. We ended the drive 12 Kms later at Karappara where the only commercial establishment was a lone tea shop.  A hot tea in the rains and we walked to the hanging bridge nearby. A long bridge which connected to the forests on the other end hung over the gushing waters. I was told that access into the forest is restricted and only the tribes residing there are allowed to go further. Less than a kilometer away from the tea shop is a popular waterfall. Cascading and splashing over rocks, the water flows deep into the forest and joins the large stream that we spotted on the way to Karappara. Though a pretty one during monsoons, the falls isn’t a large one like Karappara waterfalls which is a few kilometers further from this one. The roads were in a bad state and that made us skip the larger falls in Karappara. The long drive back from Nelliyampathy was a hazy one with misty roads and heavy rains. 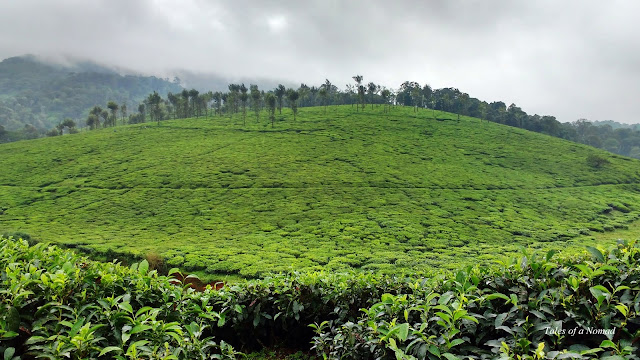 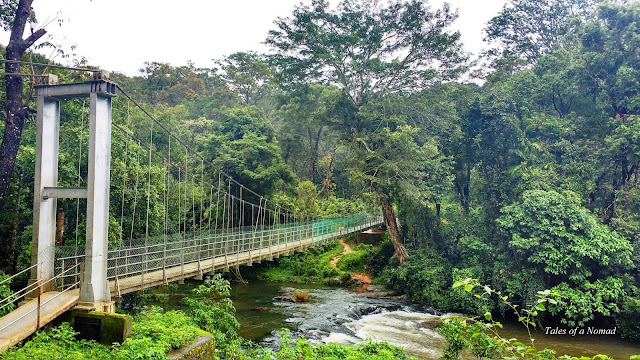 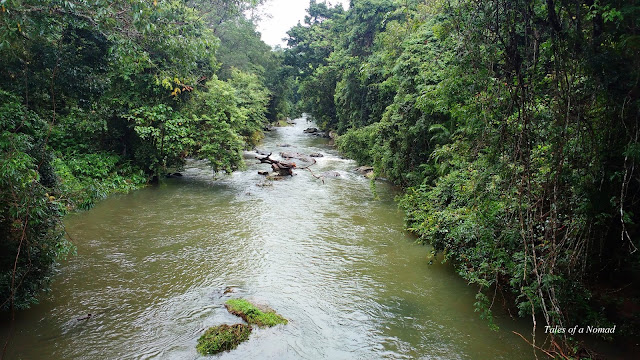 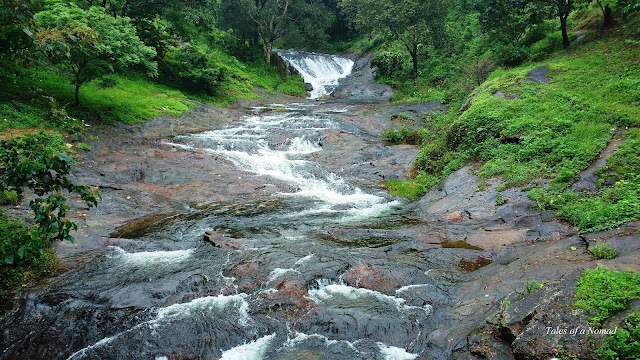 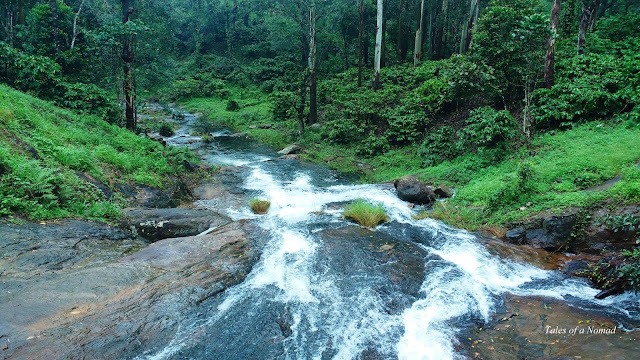 Nelliyampathy is a gorgeous hill station both during the monsoons and post that. The place is also known for its wildlife and fauna such as Malabar hornbill, owls, Malabar giant squirrel and elephants which can be commonly spotted. The myriad shades of green that this little hill station throws up are spectacular. Laced with plantations, waterfalls and vantage points, Nelliyampathy is absolutely a nature lover’s delight.

There are small eateries at Kaikatty and Nelliyampathy. However, it is recommended to head to any of the resorts or hotels such as Greenland farm houses, Whistling Thrush Bungalow, Blue Mount residency, Orange Valley hotel, ITL Holiday resorts etc. to satiate your hunger. I stayed at Greenland Farm houses and the place has an excellent restaurant apart from a wonderful outdoor area. The cottage I stayed was mediocre and the price for the same starts from INR 1500+ tax. They own a lovely farm nearby where you can find emus, sheep, pigeons, turkeys, rabbits, hens and a few other animals.
Posted by R Niranjan Das at 9:21 AM