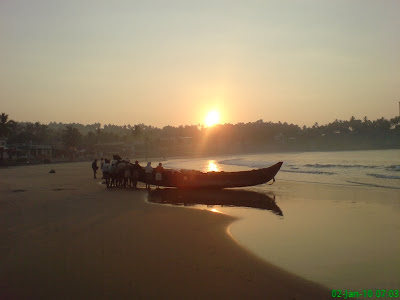 My Best friend was getting married on the 31st of December 2009 in Thiruvananthapuram and I had to find a place to spend the New Year’s Eve. Kovalam was the first destination that flashed into my mind and I gave no second thoughts to it.

I had asked many of my friends to join me; however after a lot of discussions and phone calls, the count was just 4. We boarded the new multi axle Volvo bus on December 30th night. These buses do travel at amazing speeds and the proof to the same is that we reached Thiruvananthapuram in 12 hours time. After attending the wedding we left for Kovalam by 31st late afternoon. It is hardly a half an hours drive from Thiruvananthapuram to Kovalam. The cheapest and the best option was the KSRTC and we had no qualms about it.

After a quick change we leaped into the Arabian Sea and had a lot of fun and playing in the waters. The beach is quite well maintained and the safe guards make sure that things are within their control. Being the holiday season I could see a lot of bikinis in different sizes and shapes on the beach and I had no option but to ogle. The firangis fly in huge numbers to this lovely beach town between the months of October and February. With the sun setting we headed back to the resort for the New Year’s party. The walkways were well lit up for the New Year’s Eve and had a lot of cops roaming around to make sure there were no hooliganisms on the beach. The shops and restaurants were open till late night and the people were swarming into them. Our resort had a rooftop dance floor and the party was all about boozing and dancing. With the clock striking 12, people started shouting, howling and wishing every other soul present there. The resort had a lovely pool and we couldn’t resist the temptation of jumping into it after the party. A dive into the pool after gulping down a few shots of whisky gives you a lovely sleep. Happy New Year 2010...!!

Next day after breakfast we started the New Year’s morning with a lot of beach roaming and window shopping. After that it was time for us to fill our bellies with beer. January 1st was a dry day and to avoid the cops we were served beer in coffee mugs. With the beer flowing down my throat and sea breeze kissing my face I had an amazing high. We gulped down beer till the evening before heading into the sea again. After a dip in the sea it was time for a dive in the pool. We spent a lot of time swimming and playing in the pool. A tiring day came to an end with a good dinner (rice and fish curry) and a peaceful sleep.

Got up early next day and headed straight to the beach to witness the sunrise. The beach was so calm and peaceful at the break of dawn. All I could see were a few joggers and the fishermen getting their boats ready for the day's catch. It’s a lovely sight to see the way the fishermen go about doing their work. We did want to do a bit of snorkeling but gave it a miss as there were no authorized people for it. After a bit more of roaming around the 3 beaches, we headed back to the resort and packed our bags. We had a lovely auto rickshaw ride from Kovalam to Thiruvananthapuram. From there my friends headed for Bengaluru and I caught a train to Cochin.

Kovalam is one of the best beaches in India and the most famous tourist spot in God's Own Country. With a lot of good resorts, restaurants and ayurvedic massages available it is well recommended for all beach lovers.