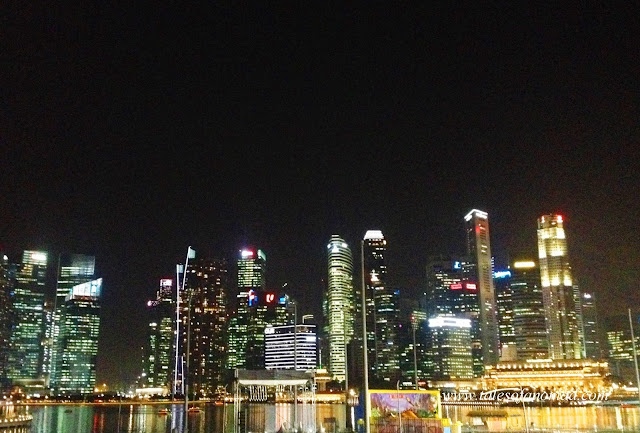 The tall and colourful gopuram (entrance gate) stood majestic amid the narrow crowded street that led to it. The street is lined with shops selling temple paraphernalia and a lot many other things. As I walked closer to the entrance, a shop keeper called out to keep my footwear at his shop. These shops double up as places where one can keep their footwear safe, apart from selling flowers and other offerings for the deity. 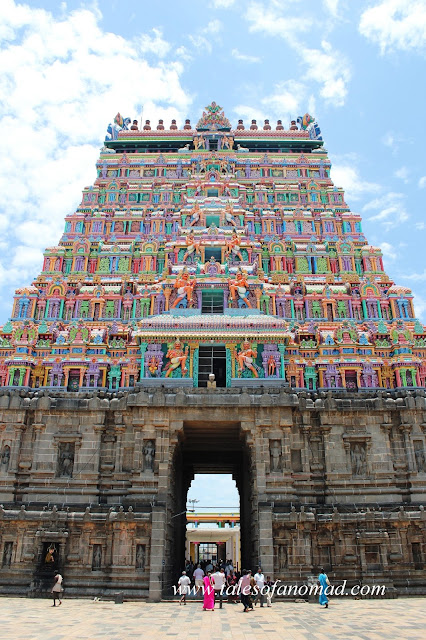 Built in the 11th century during Chola period, the extensive architecture, exquisite Chola sculptures  and vibrant colouring embellishes the temple. The main deity is Lord Shiva in a dancing pose which is quite unique from the usual Shivlinga. There is also a Vishnu shrine within the same complex. The huge temple complex also has numerous sanctums, pillared halls and huge water tanks. Mahaa Kumbabhishekam is the major festival and the whole temple comes alive during that time. Chidambaram is also known for its yearly dance and music festival.

The 130 feet gopuram dwarfed me as I walked through its sculptured interiors. Colourful and intricate with sculptures of gods, figurines and animals, there are four such spellbinding entrance towers. The expansive courtyard which is known as Kanakasabhai spans out and was tough to walk on a blistering afternoon. I had to literally rush across the hot stone pave. Early mornings or evenings are ideal timings to walk around languorously. The temple elephant stood near the entry of the inner sanctum blessing the visitors and happily posing for photographs. Apart from Mahaa Kumbabhishekam, there are many Mahaabhishekams that are held throughout the year and I had arrived one one such day.  Numerous singers in their discerning attire had gathered and were singing hymns in one of the outer halls. I walked around to see more sculptures and architecture, but the blazing sun did not help much. Apart from the gopurams, the ceilings of outer sanctums and halls caught my attention with their colourful paintings depicting mythological stories. 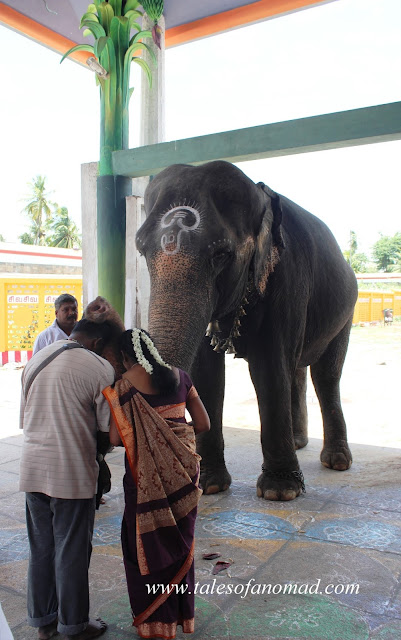 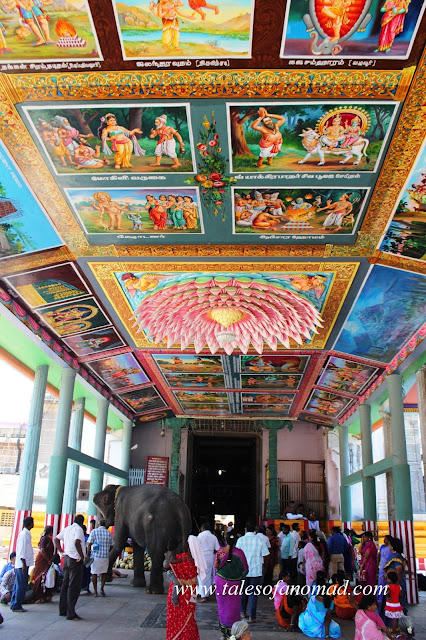 The inner sanctum (Chithsabhai) lined with more sculptures, carved pillars, and halls welcomed me as I put aside my camera (photography is not allowed in the inner sanctum). Surprisingly, it wasn't very crowded and didn't have to wade myself to get the blessings. Be wary of the priests who would force you to make huge contributions as offerings. I gave a wry smile and walked away as one called out. The huge spread of a variety of sanctified food (prasad) stood in my way as I walked through the pillared Chithsabhai, and I obliged delightfully. Though delicious, what perturbed me was the fact that it seemed more like a food stall where pilgrims could pick and choose their prasad. 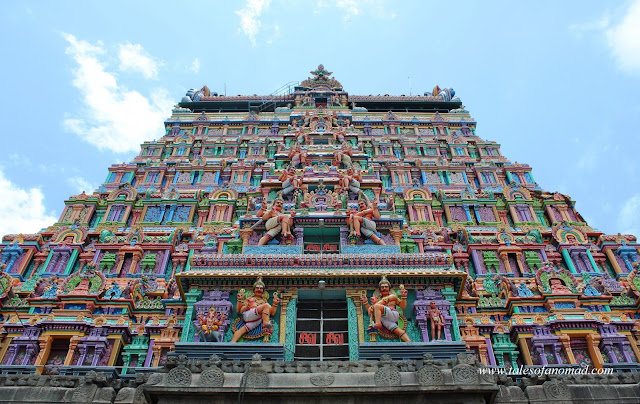 I did make a final dash around the courtyard to have a glimpse of the other gopurams and the huge water tank, Sivaganga, which has neatly paved steps with a pillared periphery.  Nataraja temple in Chidambaram is an ideal place to introduce yourself to Chola and Pallava (who did renovations later) architecture.

Getting there- Chidaambaram is well connected by road and rail to major towns like Madurai, Salem, Chennai and Bangalore. The closest airport is in Chennai.
Accommodation and Food- Chidambaram is a fairly big town and there are a wide range of options.
Posted by R Niranjan Das at 7:34 AM 28 comments:

Vast open grasslands in Maidenahalli have been conserved as a reserve forest area to protect the black bucks (Antilope Cervicapra). Expansive open lands which seem endless has a dirt road meandering through its midriff with distant hills and tall grasses on either side. These gorgeous species of deer can be spotted sauntering across and raising its head on hearing a noise. Quite shy, they scamper away on hearing the slightest of sound. One can drive their private vehicle through the reserve and spot the bucks freely roaming around. There are a few watch towers which offer expansive vistas. The reserve also has numerous avian fauna apart from other mammals such as jackals and mongoose . The place is also known for its spectacular sunsets. 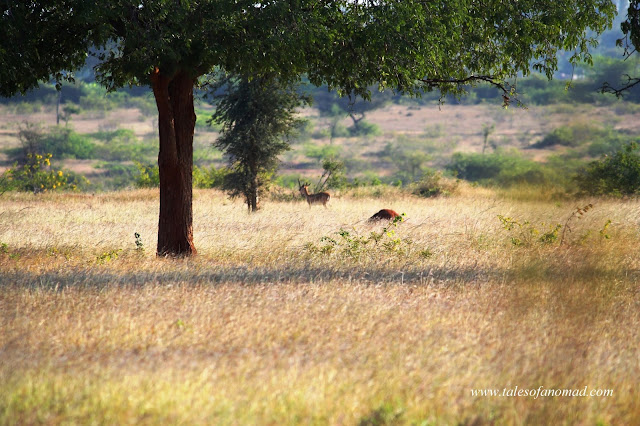 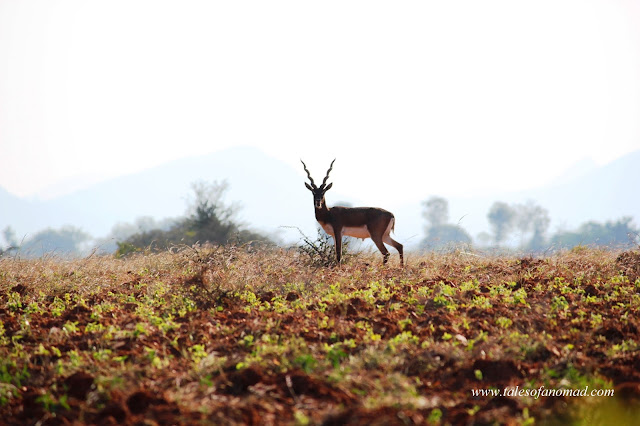 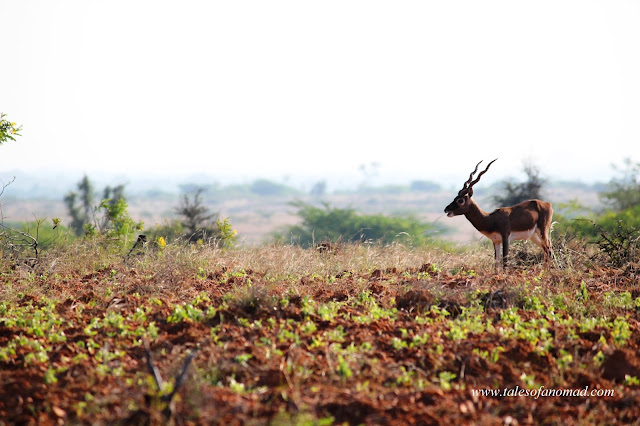 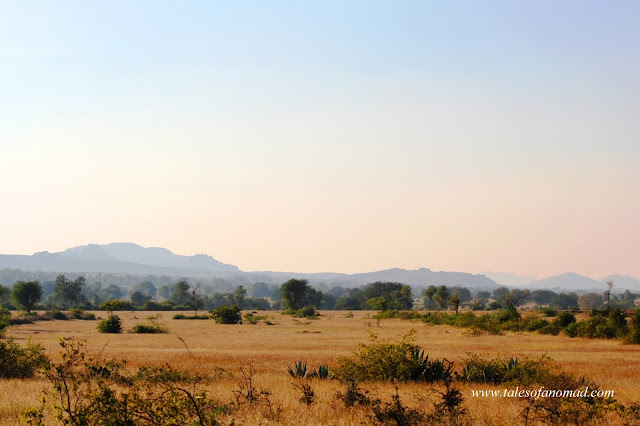 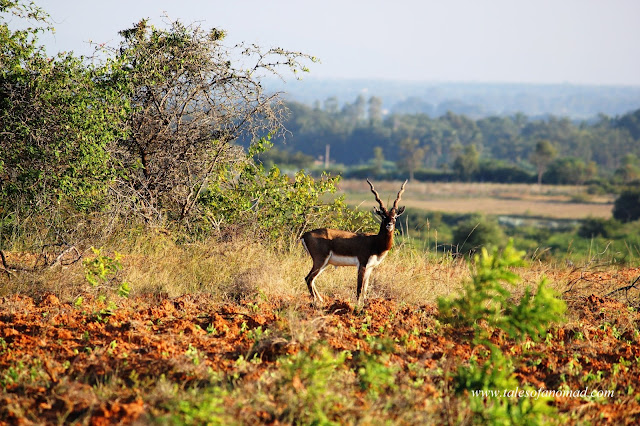 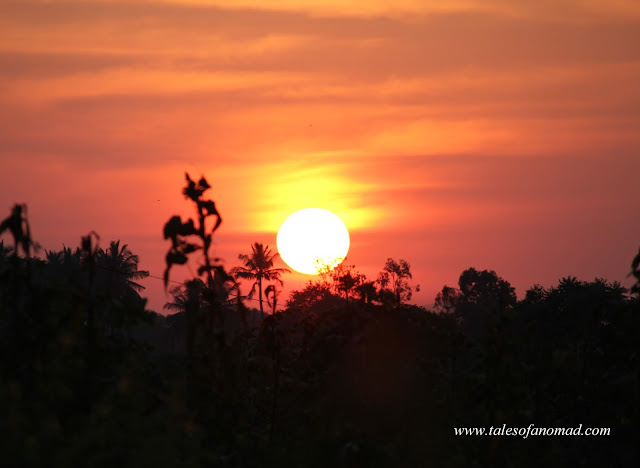 This reserve is definitely off the beaten path and with hardly any direction markers, requires quite an effort and numerous stops to ask the locals for directions. Hope the authorities would take interest to help visitors locate the place more comfortably. There are no hotels nearby and it is recommended to carry ample water.

This is the second largest blackbuck reserve in Karnataka after the one in Ranebennur. Located in Tumkur district, near Maidenahalli village, this conservation reserve is about 125 Kms from Bangalore (via Doddabellapur- Gauribidanur- Kodigenahalli).
Posted by R Niranjan Das at 3:43 PM 28 comments: