Mahabalipuram: Sculpted along the Coast 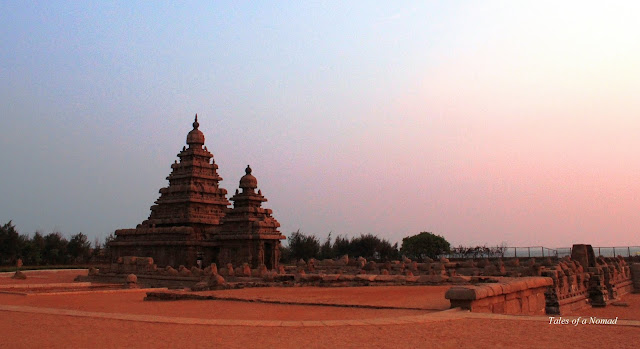 A major seaport during the days of Pallava dynasty, Mahabalipuram is carved in stone with innumerable sculptures and ancient temples. It was in the 7th century CE that the Pallava ruler Narasimha Varman-I made this small town his capital. Known as Mamallapuram earlier, the temples here are mostly monolithic (carved from a single rock) and are a UNESCO World Heritage site. As almost all the temples were built during 7th and 8th century, most of the sculptures have been windswept over the years due to its location by the Coromandel Coast. Though the town has moved on from the times of Pallavas, a stroll through Mahabalipuram’s alleys would throw up sculptors chiseling away on stones to create magnificent sculptures. 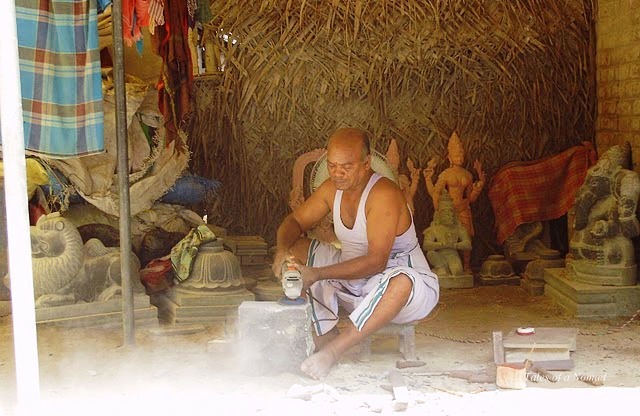 Standing strong against the harsh salty winds over centuries, the Shore temple is located close to the sea and hence gets its name. Built by Narasimha Varman I in 7th century and rebuilt by Narasimha Varman II in typical Dravidian temple architecture, this protected monument has a two tier wall lined with numerous sculptures of Nandi. There are two shrines here- Kshatri Simheshwara and Raja Simheshwara, dedicated to Shiva. Between the two shrines is a huge carving of Ananthashayana (form of Vishnu) in reclining pose on the walls of the main shrine. While the main shrine with a shiva linga in the inner sanctum has a five tier stepped pyramidal tower, the smaller shrine in the front has a three tier tower. Both the shrines have been extensively embellished with carvings, most of which have been eroded over the years due to the salt laden winds. The premise also has a small tank, a dilapidated entrance gate, a few more shrines and numerous scattered sculptures of nandi. It is believed that there are more temples and shrines here which have been covered in sand and remains underground. The narrow lane that runs parallel to the shore temple goes past numerous shops selling a plethora of stone works and leads to the beach. 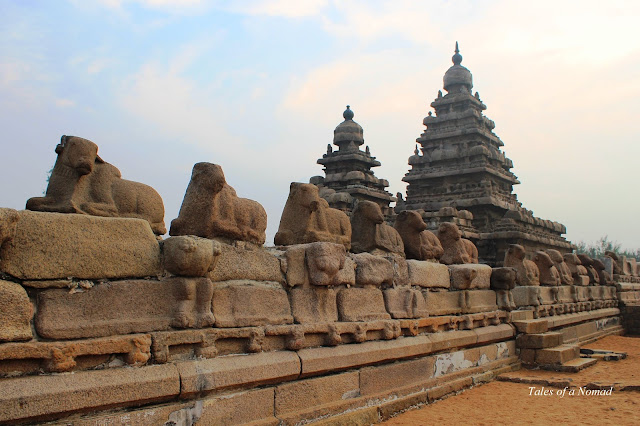 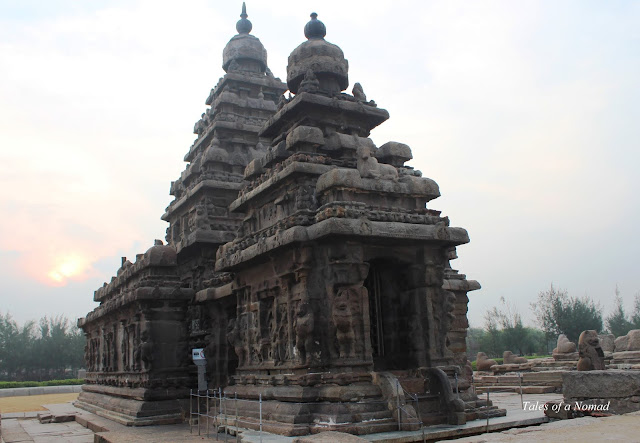 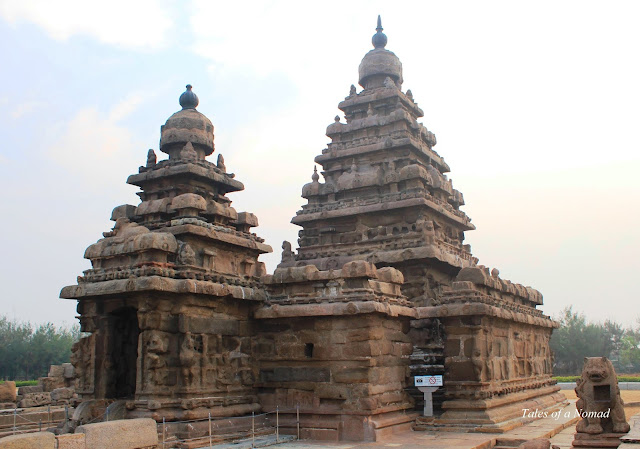 Dating to the 7th century, Pancha rathas in southern Mahabalipuram are a group of five temples in the form of chariots dedicated to the characters from Mahabharata- Pandavas and Draupadi. Built from monolithic rocks, these temples have elaborate carvings on them and sculptures of animals such as nandi (bull), elephant and lion can be found outside them. The first ratha on the left is dedicated to Draupadi and the one next to it is Arjuna ratha. There is a sculpture of nandi behind Draupadi and Arjuna rathas. The ratha dedicated to Nakula and Sahadeva stands in front of the Arjuna ratha and has a large sculpture of an elephant adjoining it. Bhima ratha is the largest ratha here and is also the most beautifully carved one. Dharmaraja ratha is at the southern end and has a square structure with a pyramid shaped tower atop. The premise also has a few rocks with unfinished works which says that there were more temples and shrines that were planned here during the times of Narasimha Varman I. 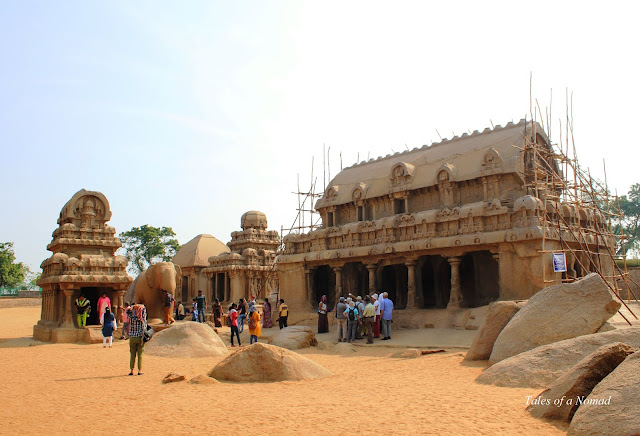 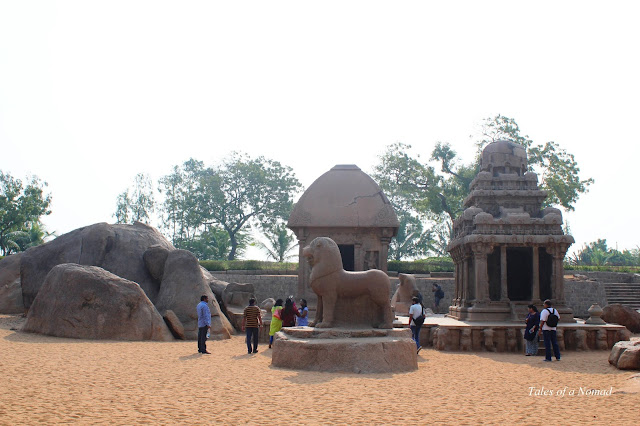 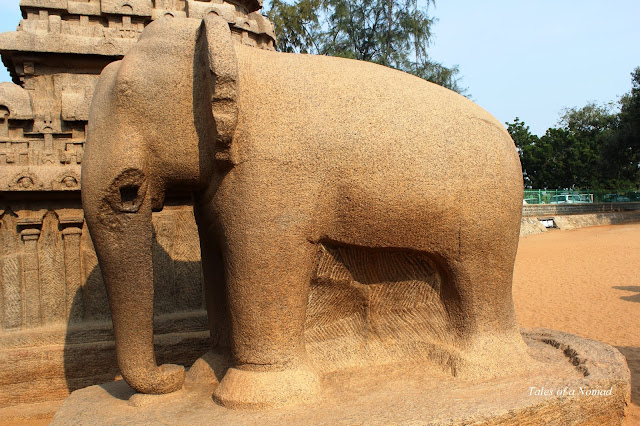 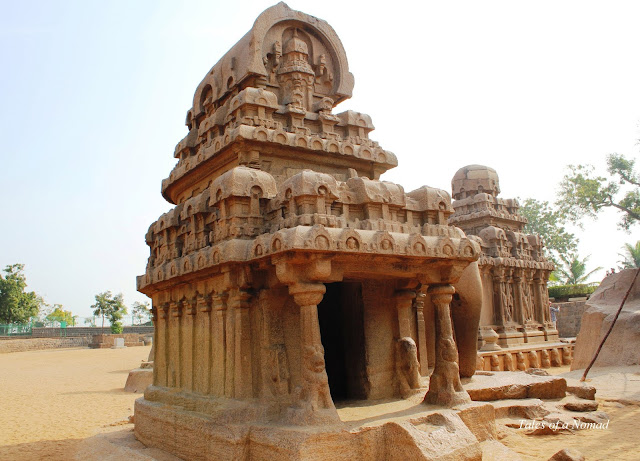 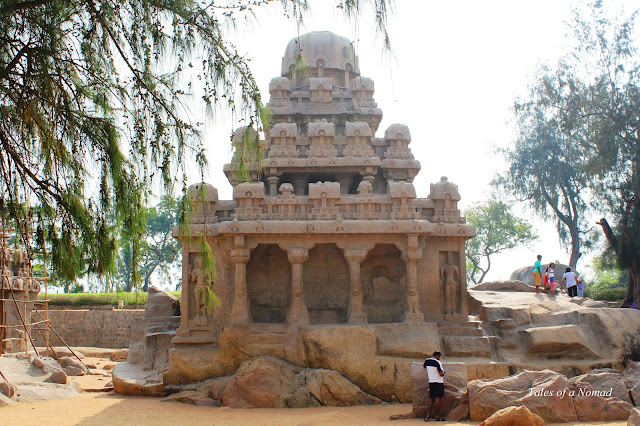 Descent of the Ganges which is also referred as Arjuna’s Penance is one of the outstanding works in Mahabalipuram and is considered to be one of the largest rock reliefs in the world. Inscribed on a large rock, it showcases scenes from Mahabharata including that of Arjuna performing a penance.  There are numerous other mythological characters that are carved on this relief. The carvings depict the story of Arjuna’s penance to get a weapon during the war and also of the descent of river Ganga from heaven to earth. Adjoining the rock relief is the Panchapanadava mandapam with carved pillars and stone works on its facade. 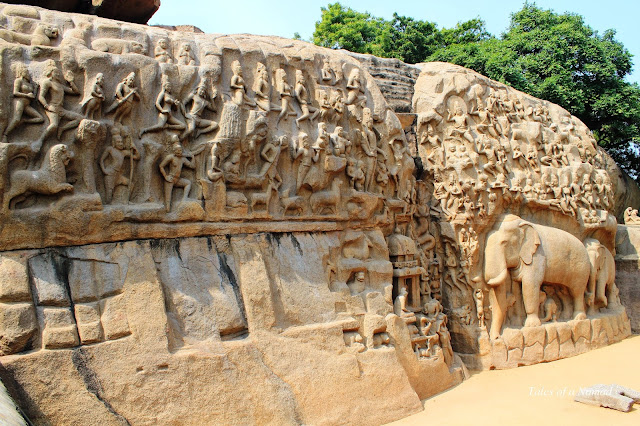 Krishna mandapa is another cave temple near the rock relief which has carings on its façade and also on its walls. The wall carvings are huge and depict stories from the life of Krishna. Here he is shown holding aloft Govardhana mountain to protect his folks from rain. There are also carvings depicting cattle, people milking cows and other daily chores during those days. 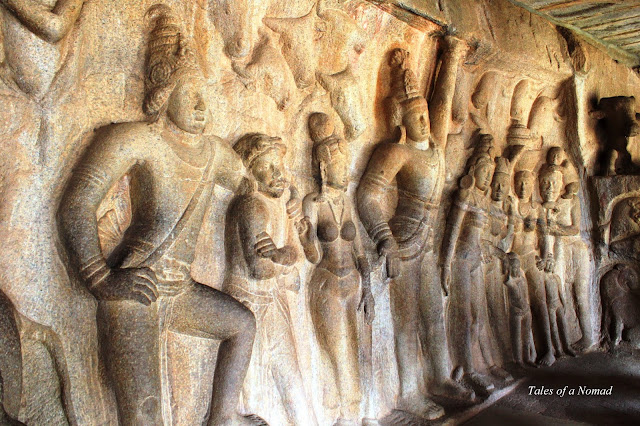 The main hilock in Mahabalipuram overlooks the town and has numerous cave temples and mandapas strewn across it. Krishna’s butter ball is a landmark structure in Mahabalipuram and a favourite with photographers as the large boulder precariously balances on the slopes of the hillock. The cave temples here have wonderful carvings on them depicting various gods, mythological characters and stories from mythology. Ganesh ratha which was earlier a Shiva temple and later converted into a Ganesha temple has wonderful carvings on its tower. This ratha looks similar to the Pancha rathas and has sculptures inside too. Varaha mandapam is dedicated to the boar form of Vishnu and has large panels on its inner walls. Thrimurthy cave nearby has three shrines dedicated to Brahma, Vishnu and Shiva. Mahishasuramardhini cave temple at the southern end of the hillock has sculptures of Durga and also magnificent carvings depicting mythological stories. Atop this is the beautifully carved Olakkaneshwara temple. Ramanuja mandapa and Kotikal mandapa dedicated to Durga are the other popular temples here. 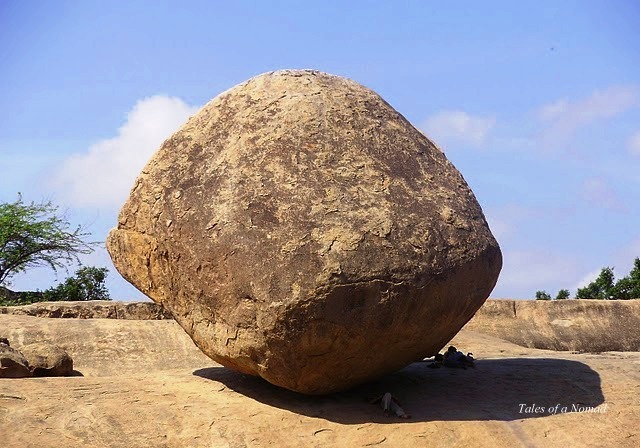 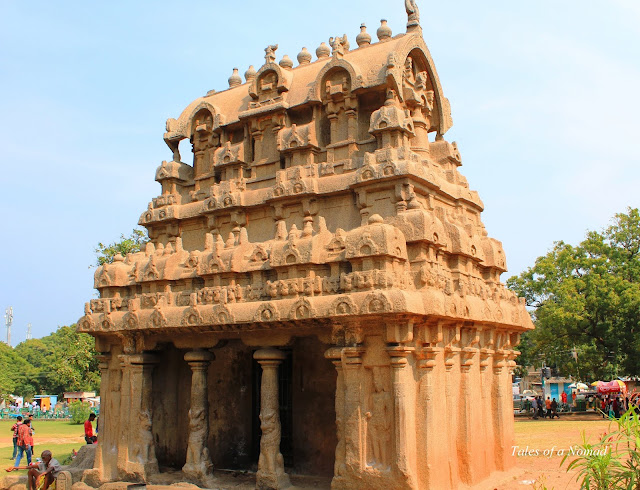 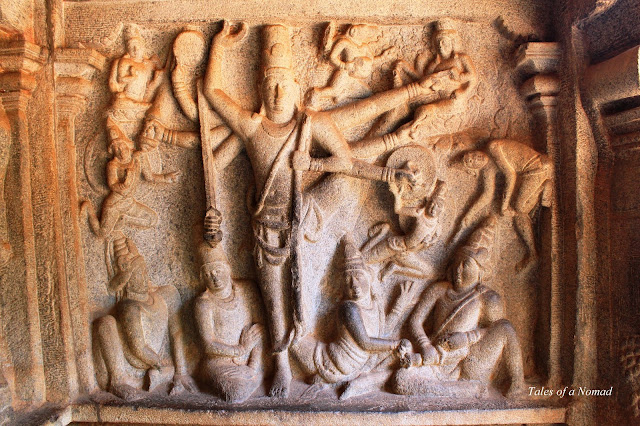 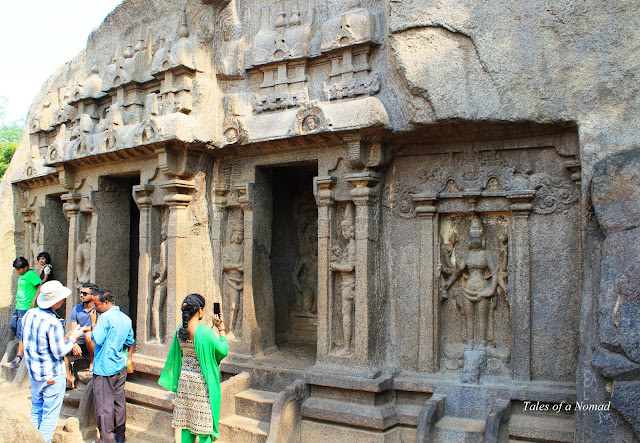 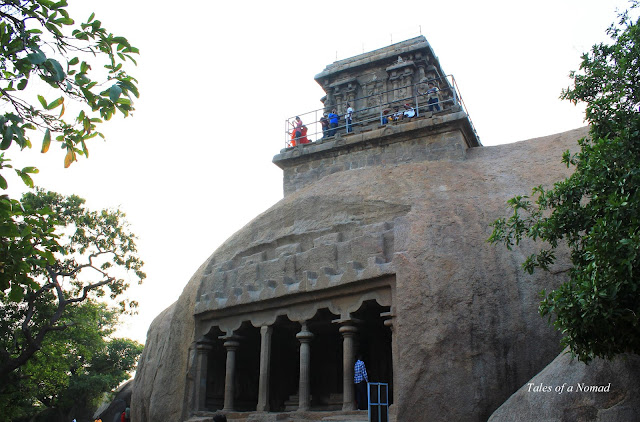 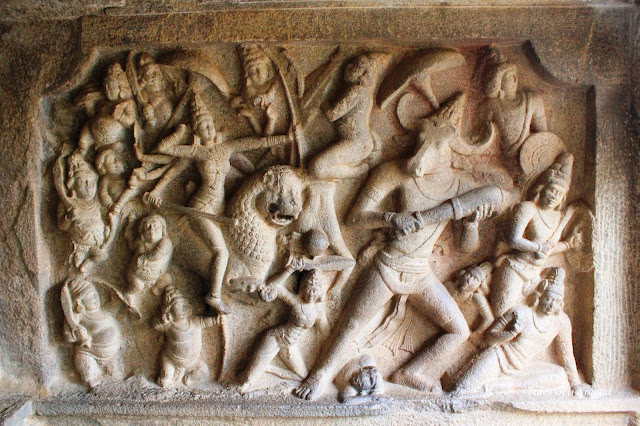 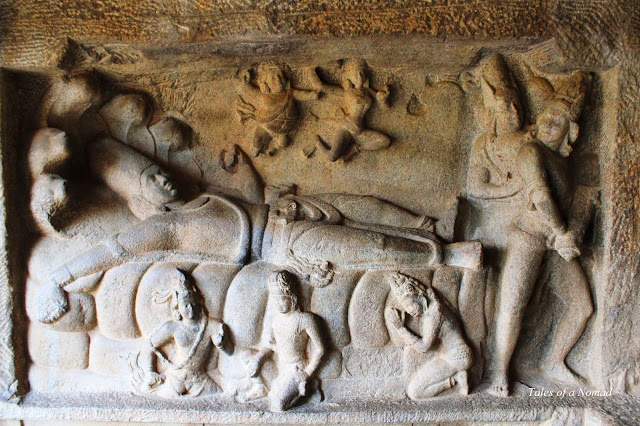 At the northern end of the site is a huge unfinished entrance gate which has intricate carvings on its inner walls. Opposite the Mahishasuramardhini cave temple is the lighthouse which was built in 1887 CE. The lighthouse offers magnificent panoramic views of this heritage town. 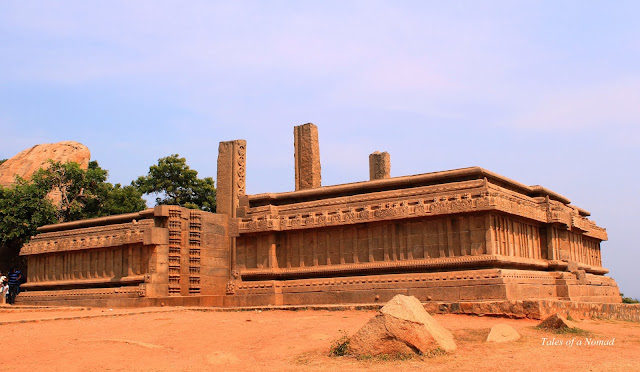 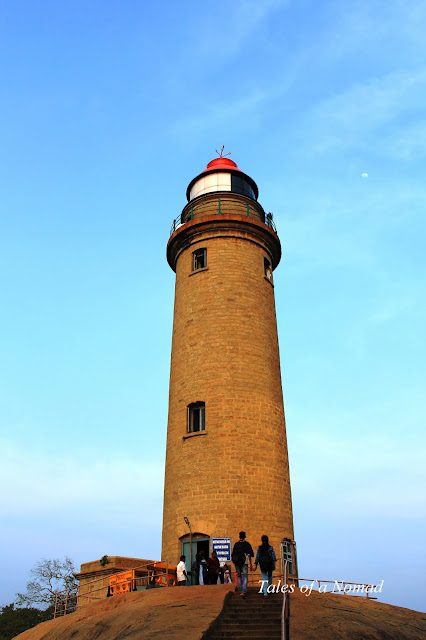 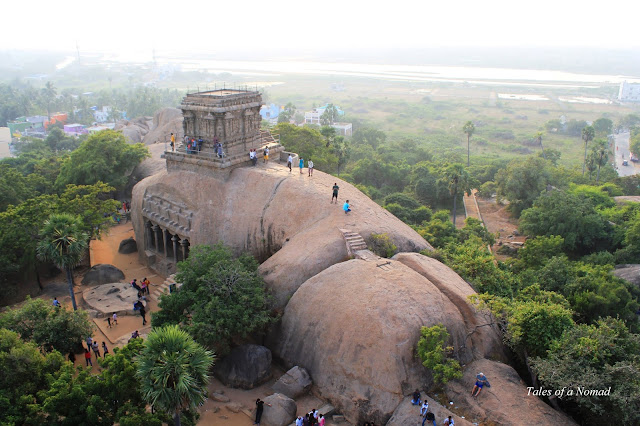 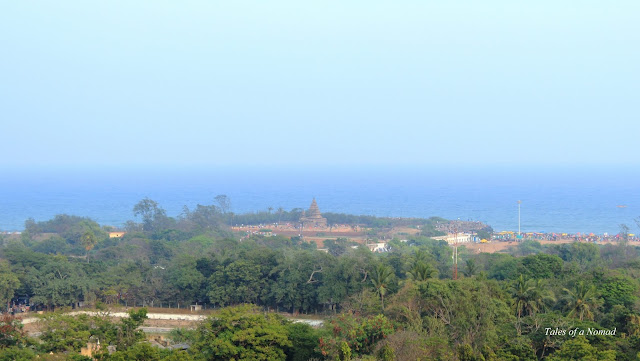 The streets of Mahabalipuram are a delight to walk in the evening with innumerable shops selling a plethora of items including stone works and shells. The sea shell museum here is an interesting one and the beach is known for its rough tides. 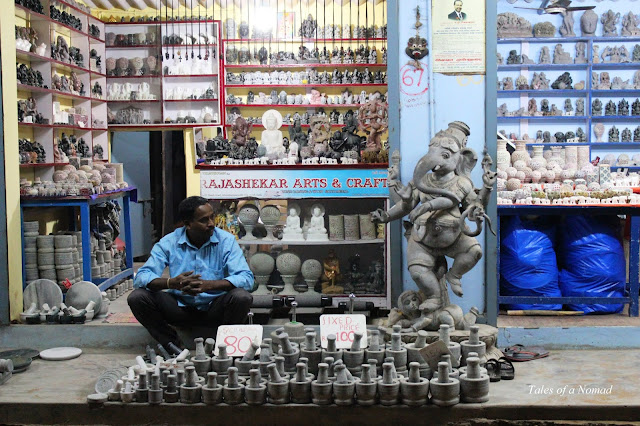 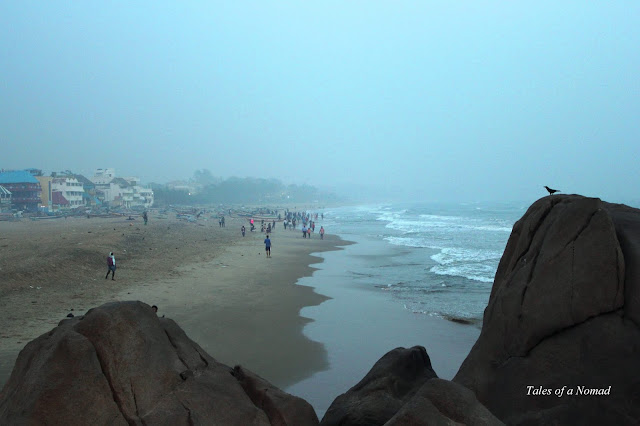 Mahabalipuram throws you back to the times of Pallavas who were passionate about temple architecture and showcases a display of the same through innumerable carvings and sculptures across the town.

Located along the coromandel coast, Mahabalipuram is 65 Kms south of Chennai. The nearest railhead and closest airport are in Chennai. There are frequent buses from Chennai to Mahabalipuram.

There are both vegetarian restaurants and cafes serving western cuisines across the town. Othavadai street has numerous cafes such as Moonrakers and Le Yogi. Mahabalipuram has a wide range of options to stay from guesthouses to luxury hotels. I stayed at Rajalakshmi guest house on Othavadai cross street which is well recommended.
Posted by R Niranjan Das at 9:48 AM