Leaning Tower of Pisa and the Square of Miracles

I stood gazing at the mind-boggling architectural complex sandwiched between the green grass and the blue sky for a while that I even forgot to capture the frame. All that I wanted to do was enjoy the mesmerising structures in oblivion at the Square of Miracles. The spectacular creations with magnificent architecture stands intimidating as visitors compulsively stood in front of cameras with the ubiquitous ‘Pushing the Leaning Tower of Pisa’ pose. While the leaning tower has taken all the attention over the years at this UNESCO World Heritage site, the square which is locally referred as Piazza dei Miracoli also houses a baptistery, a cathedral, a cemetery and museums. 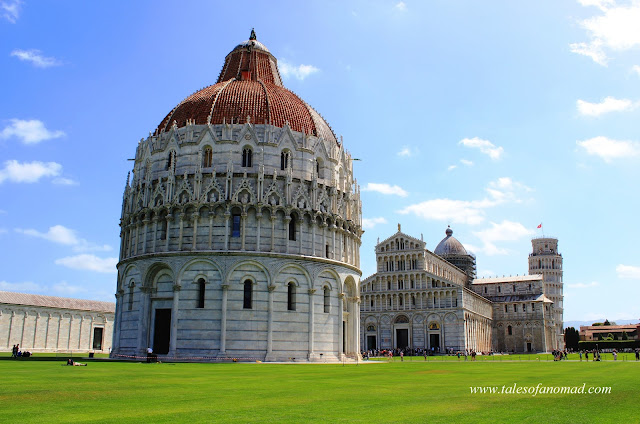 A popular one day getaway from Florence, Pisa is located in the beautiful Tuscany and is renowned for its iconic leaning tower which was once a part of the Seven Wonders of the World. From Florence there are frequent trains to Pisa, where one can take a 10 minute bus ride from the station to the Square of Miracles. 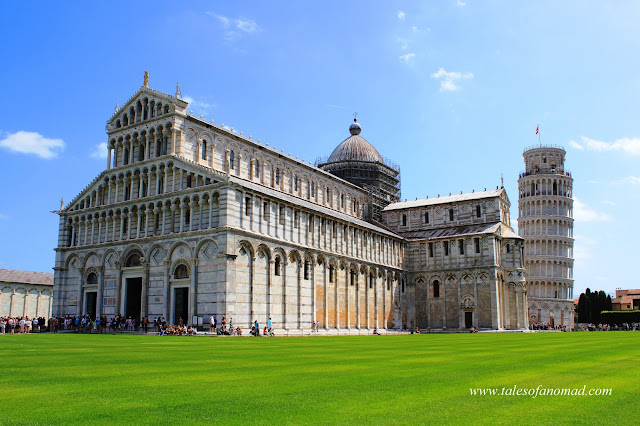 Battistero di San Giovanni or the Baptistery of St. John is the first gorgeous structure in the complex. The construction began in mid 12th century and it took more than two centuries to complete the same. Though built in Roman architecture, there are also influences of gothic and byzantine style. This is the largest baptistery in Italy and is adorned with stunning works on its outer façade. However, the decorations inside are quite limited with the bronze statue of St. John and the carved pulpit being the major attractions. One can go to the higher floor to have an aerial view of the baptistery. 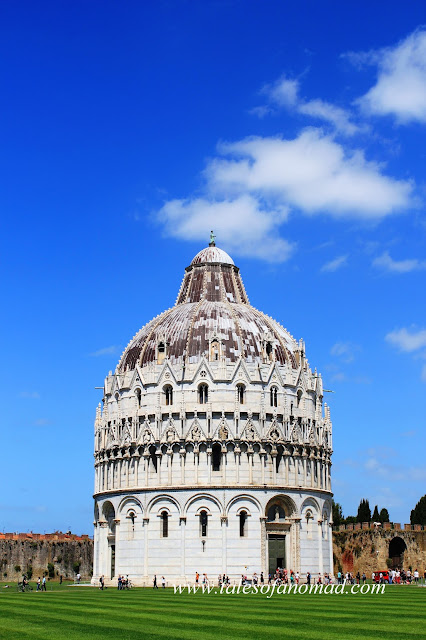 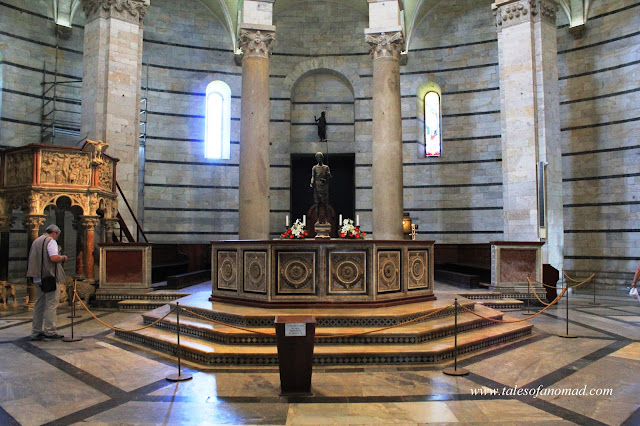 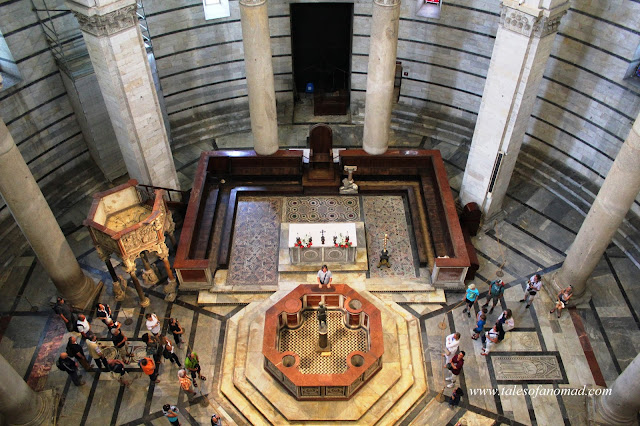 Cattedrale di Pisa or the Cathedral with its numerous marble pillared exterior stands tall facing the baptistery. Built in late 11th century, the cathedral also referred as the Duomo is dedicated to St. Mary of the Assumption. The interiors are characterized by beautiful granite pillars in Corinthian style. With undulating motifs and colourful marble works, the cathedral has rich art works all around. Extensive decorations can be seen on its large doors, along its aisles on either side and on the gorgeous ceiling. The pulpit, Galileo’s lamp and art works atop the large doors are the other major attractions of the cathedral. 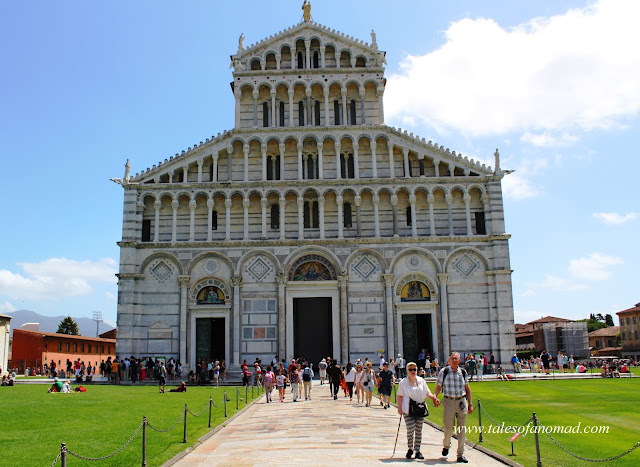 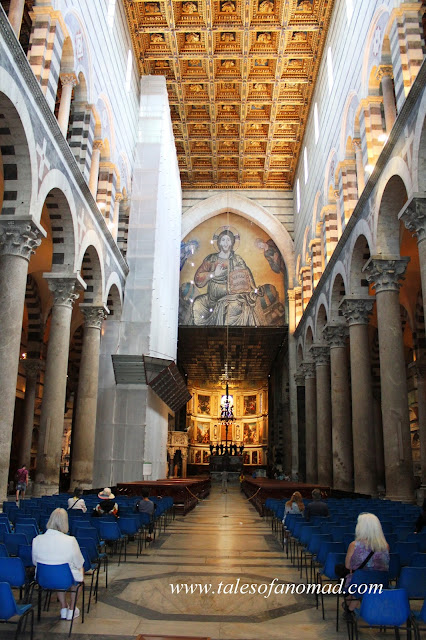 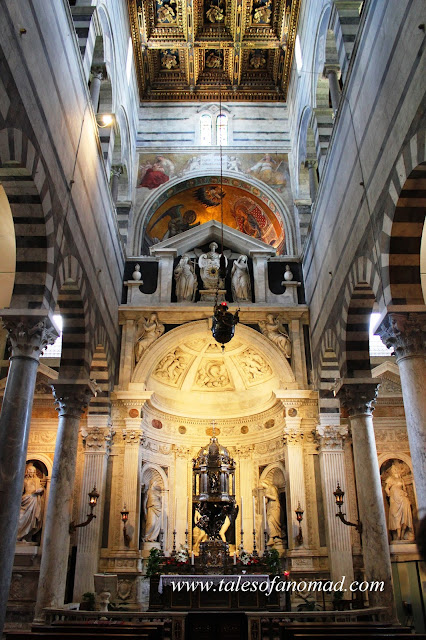 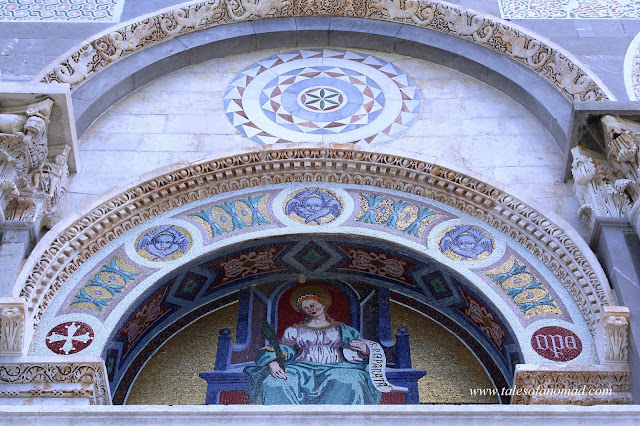 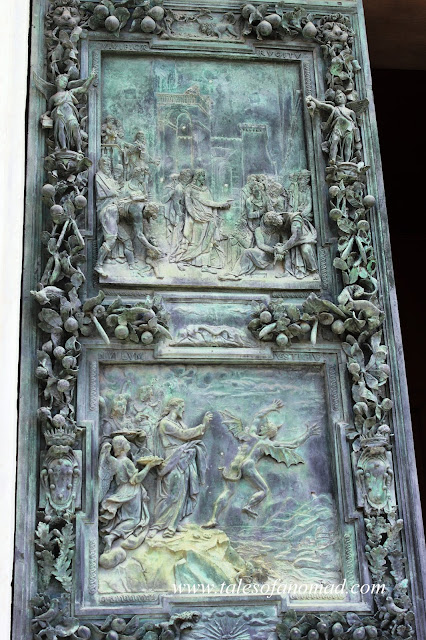 Behind the cathedral is the ever popular campanile or bell tower, commonly referred as the Leaning Tower of Pisa. Completed in the 14th century, this renowned structure is known for its tilt. The structure tilted while it was under construction, and gradually stabilized over the years and also due to restoration which reduced the tilt from 5.5 degrees to 3.99 degrees in the late 20th century. Designed by architect, Diotisalvi, the tower has seven floors with numerous beautiful pillars and a winding stairs that goes all the way to the top which has a huge bell. 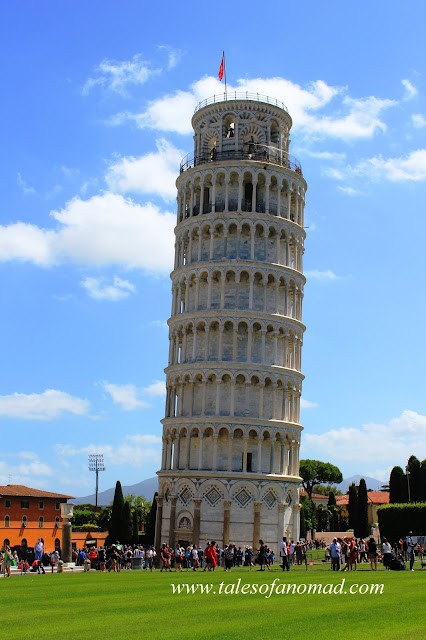 To the left of the cathedral is Camposanto Monumentale or the monumental cemetery which is referred as the holy field as it is built over a huge load of sacred oil brought from Calvary in the 12th century. Beneath this burial ground lies the ruin of an old baptistery. The walls of the cloister here have beautiful but faded frescoes and it also has a well maintained garden. The cemetery once had numerous art collections, but very few remain now. 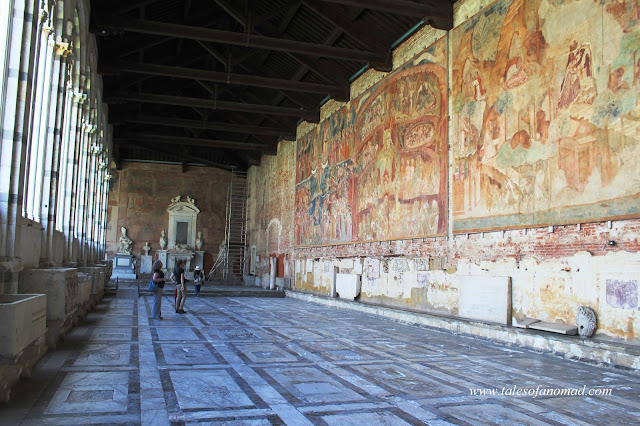 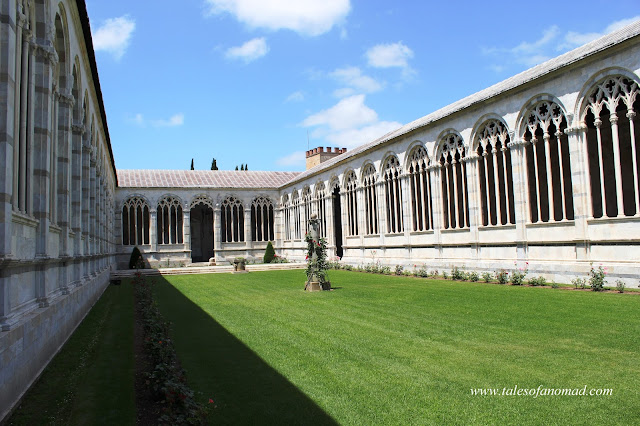 Capitoline Wolf or Lupa Capitolina, the symbol of Rome located to the left of the leaning tower is another attraction in this complex. The sculpture of a mythical she-wolf and suckling twins- Romulus and Remus is of great importance in Roman history. Next to this lies the bronze statue of Fall of Icarus. 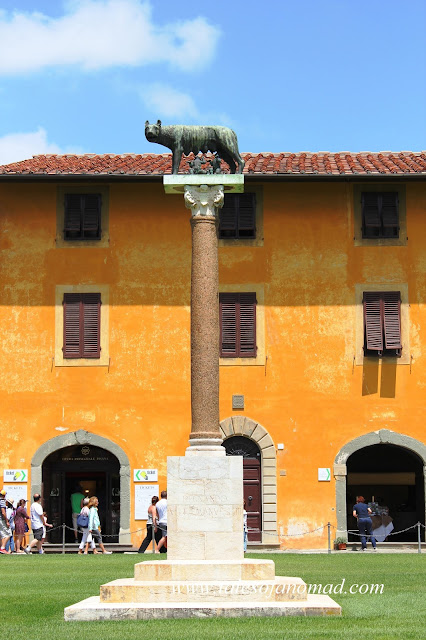 Fontana Di Putti or Fountain with Angels has a sculpture of three angels above a small fountain located near the leaning tower. 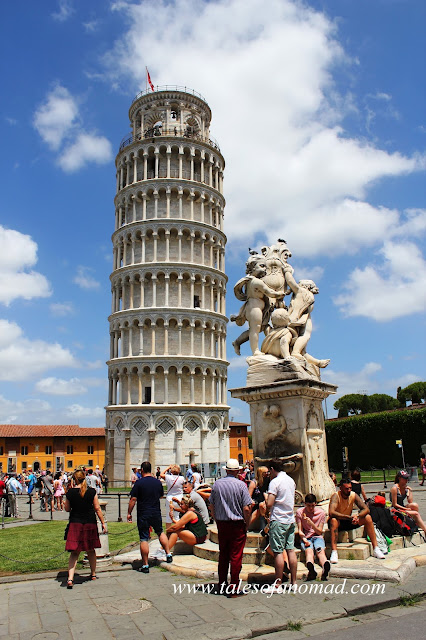 Museum of the Opera of Cathedral and Museum of the Sinopie are the two museums inside this magnificent complex.