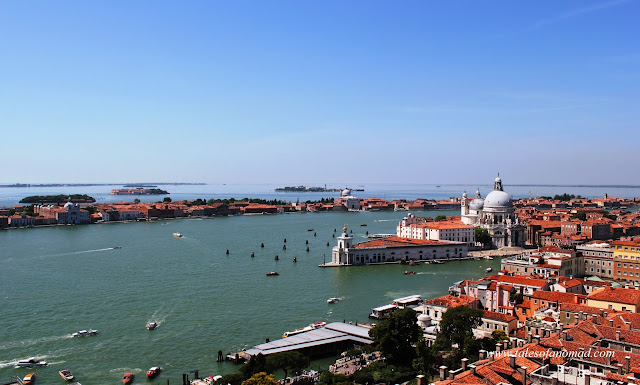 While Florence charms visitors with its art and architecture, Venice engulfs you with its picture postcard streets, buildings and waterways. The Venetian windows decorated with flowers, numerous outdoor cafes along with musicians on the colourful streets and the neatly decked up gondolas rowing beneath the bridges accentuates the charm of this gorgeous city. Devoid of vehicular traffic (you will not even sight a two wheeler unless close to the station or airport), the streets and the small bridges that run over the canals are a delight to stroll. Though Venice was planned centuries ago with canals running all over and looks mesmerizing, what is more astonishing is the fact that they continue to function in a similar fashion even in the 21st century. The waterways are well connected and the gondolas take visitors on beautiful rides down the canals. Ferries are very much in place and they run very frequently from one point to another across the city. 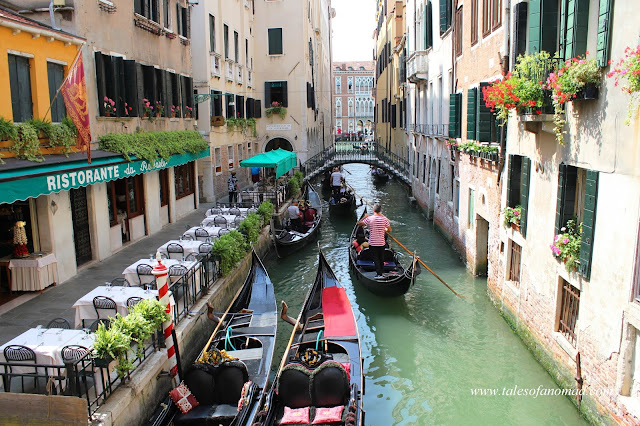 Made up of 118 small islands, connected by more than 400 bridges and divided into 6 sestieri (a sub division of Italian towns), this world heritage site is not a place where you run around from one point to another to tick off. One needs to languorously walk around, take in the air, gaze at the beautiful old buildings, wave at the gondolas, enjoy the views from the bridges and soak in its ambiance. That is how you see, feel and enjoy Venice. It is not without a reason that Venice has been often referred as one of the most romantic destinations in the world. However, there are a few major places of interest which can be visited as you stroll through its vibrant streets. 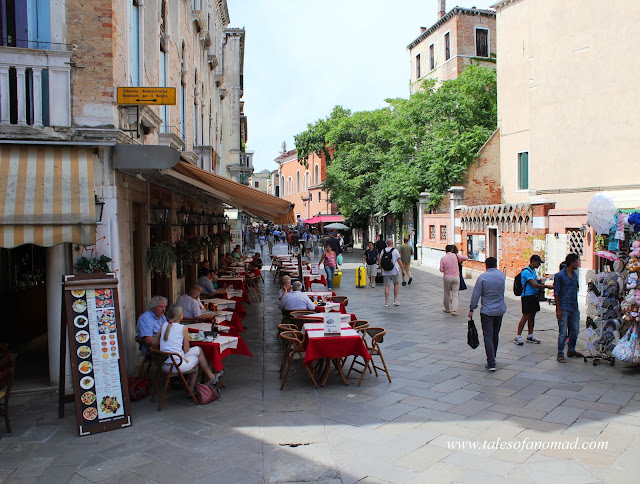 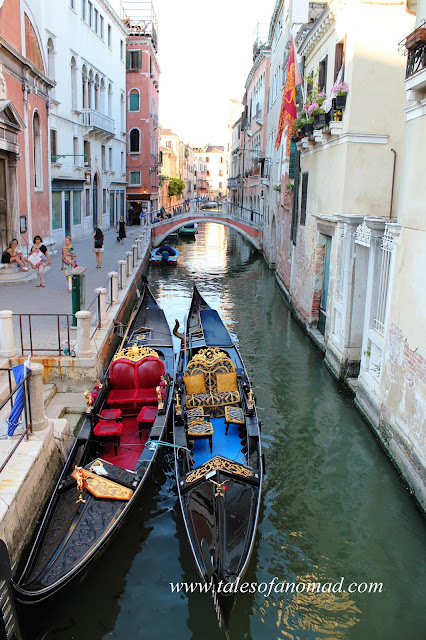 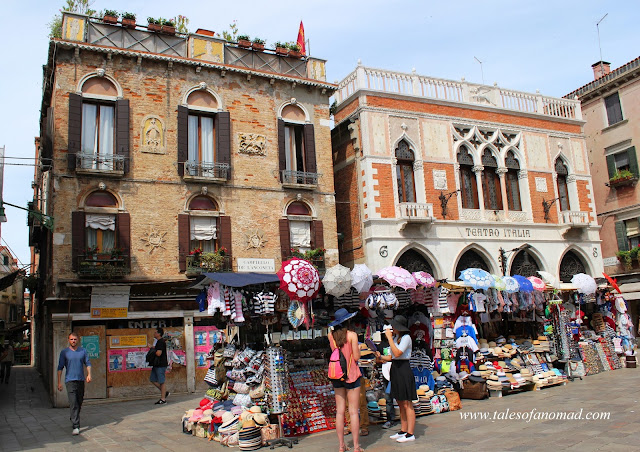 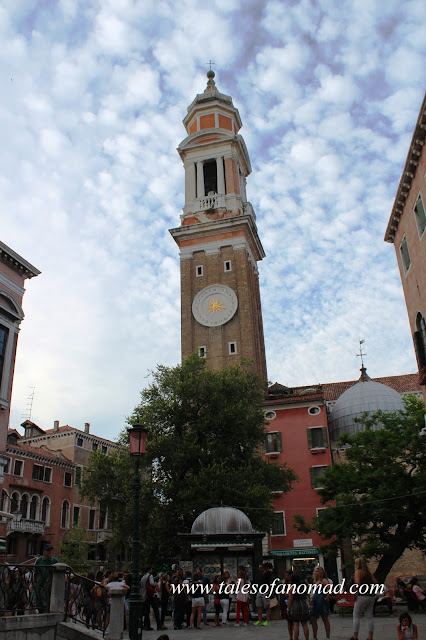 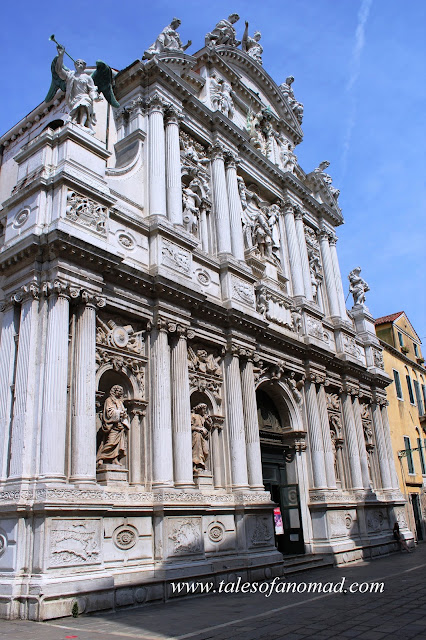 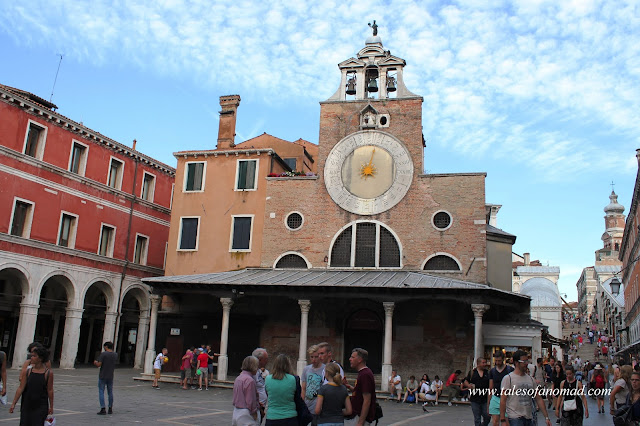 Rialto Bridge is the main bridge which runs over the Grand Canal and is one of the major highlights of the city. It connects San Marco sistiere with San Polo sistiere. With beautiful vistas of the canal, the innumerable buildings (dating from 13th to 18th century) on both banks and the boats plying under it, the bridge forms the symbol of Venice.  Many shops and cafes share space on the streets where the bridge connects the two sistieri. The 3.8 Kms long Grand Canal which meanders in an inverted ‘S’ shape is the main canal where most of the water buses operate. 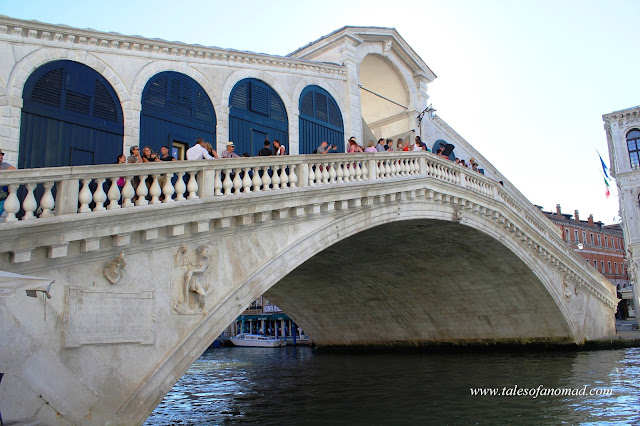 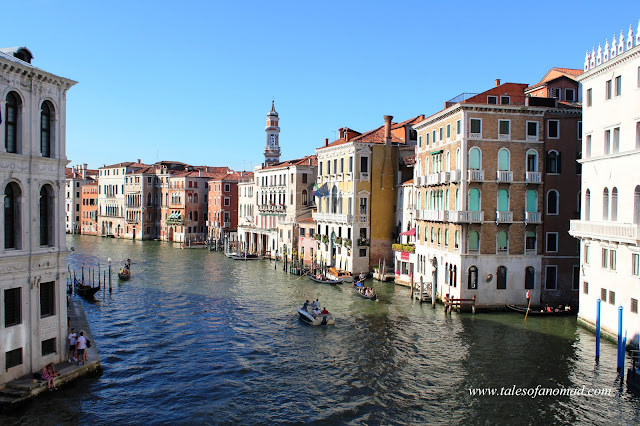 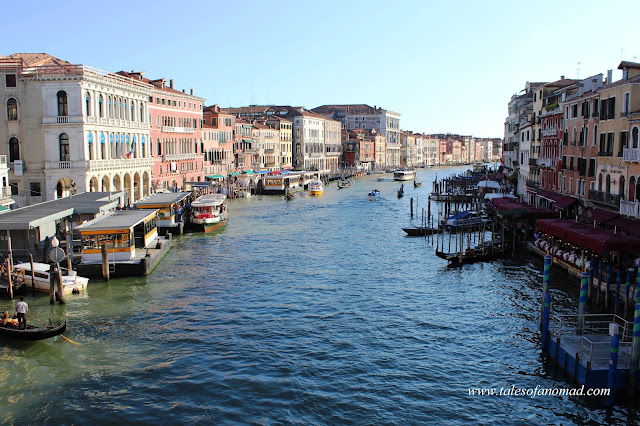 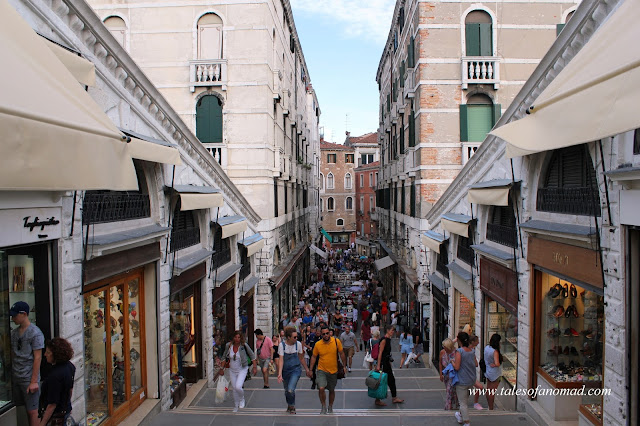 The canals are best explored by a gondola ride. There are many points along the streets where they provide the service. The ride which last for half an hour gives a closer perspective about the city of canals and bridges. The ride takes you through the narrow canals and the broader Grand Canal as the boatman hums local folk songs. A ride in the evening is recommended as it gets pretty hot during the day time. 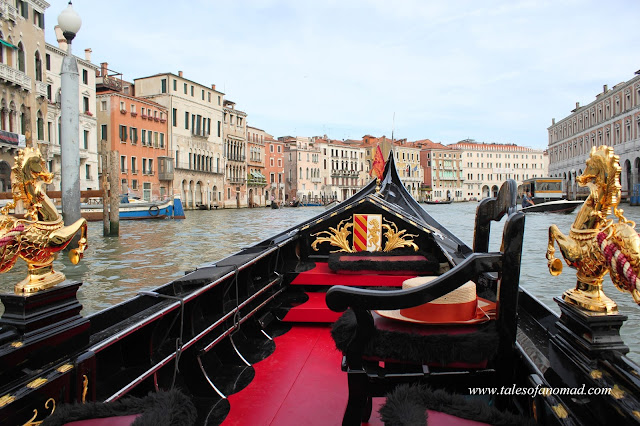 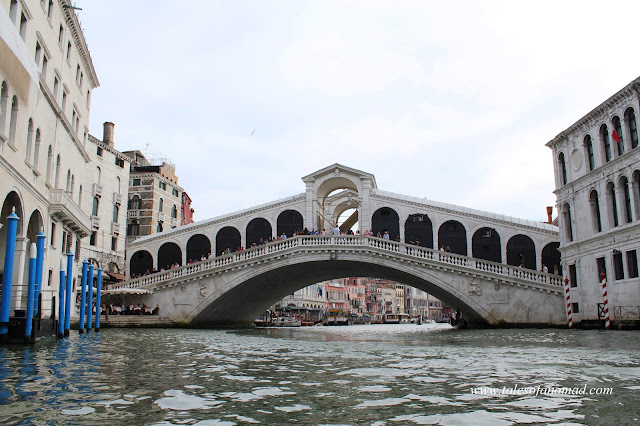 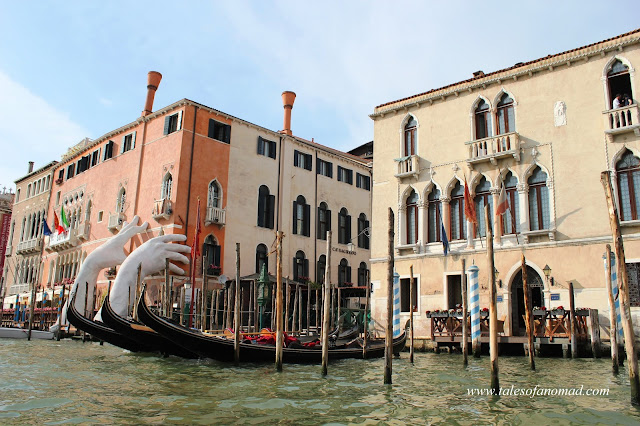 Further ahead of the bridge, St. Mark’s Square or San Marco Piazza is one of the landmarks of Venice. The square which is popular amongst visitors as one can feed numerous pigeons fluttering around, also houses Basilica Di San Marco, the Bell tower and the very popular Doge’s palace.

Basilica Di San Marco, also known as Saint Mark’s Basilica is the most popular cathedral in Venice and is known for its Italo- Byzantine architecture. Built in the 11th century, the gold ground mosaics and the beautiful designs stand out symbolizing the power and wealth of Venice. The gold mosaics adorning the interior ceiling and on the insides of the domes portrays exquisite art works. More art in the form of carvings and sculptures add to the beautiful interiors of this basilica. 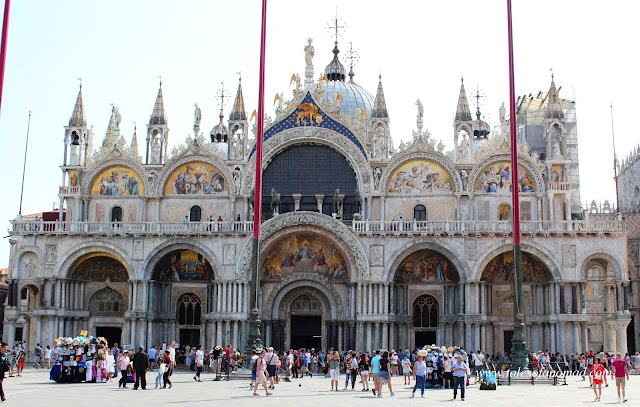 The bell tower known as St. Mark’s Campanile stands tall near the basilica and visitors can take the elevator to go all the way up. First built in early 16th century, the tower has a pyramidal spire on top and houses five large bells with carvings on them. However, what attract visitors are the breathtaking vistas from the top. The canals, the speeding boats, the small islands and the innumerable red tile roofed structures form a beautiful frame. This is undoubtedly the best place to have an aerial view of Venice. 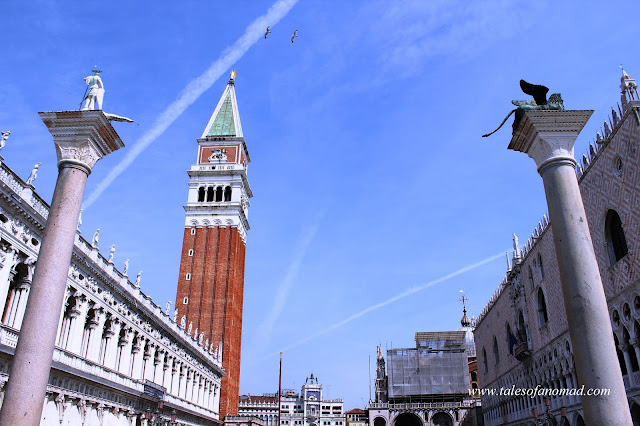 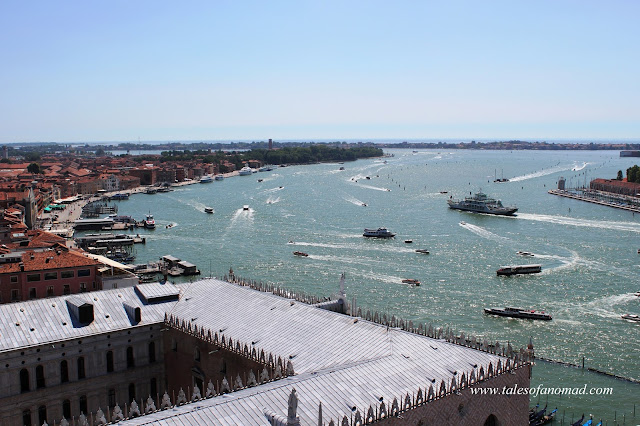 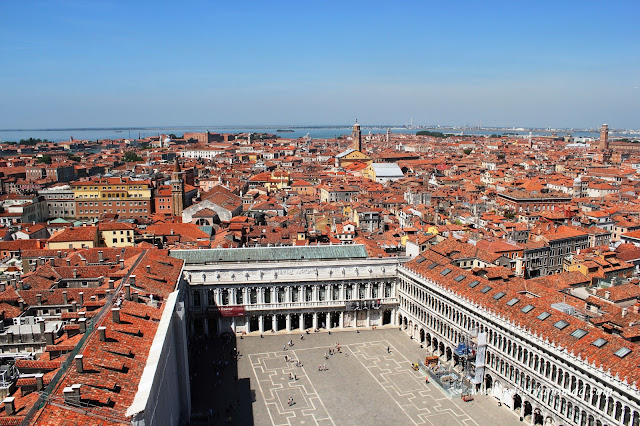 Adjacent to the basilica is the Doge’s palace or Palazzo Ducale, a 14th century palace built in Gothic architecture and which was the residence of the ruler of Venice. However, it now houses three museums which have magnificent paintings and art works displayed across its various rooms. The golden staircase that leads up to the apartments (rooms) is beautiful and has wonderful works in gold. Mind blowing paintings on large canvases adorn the walls and ceiling of every apartment. The ubiquitous golden frames add more charm to the spectacular creations which depict various stories from the bible. The exceptional art work leaves every visitor gasping for more. Apart from the numerous apartments and chambers, the palace also houses a collection of unearthed items, a display of armoury and a dungeon with a view of the Bridge of Sighs. 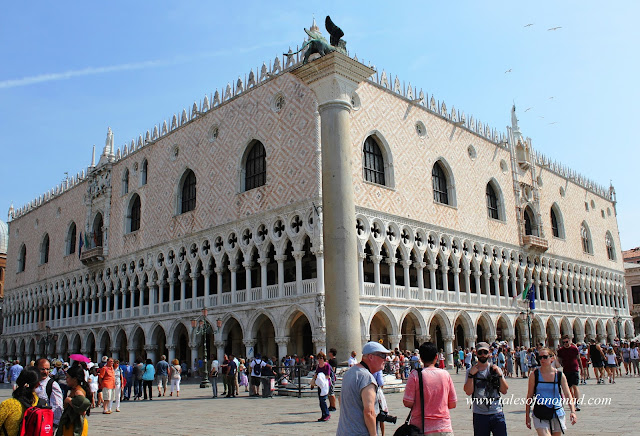 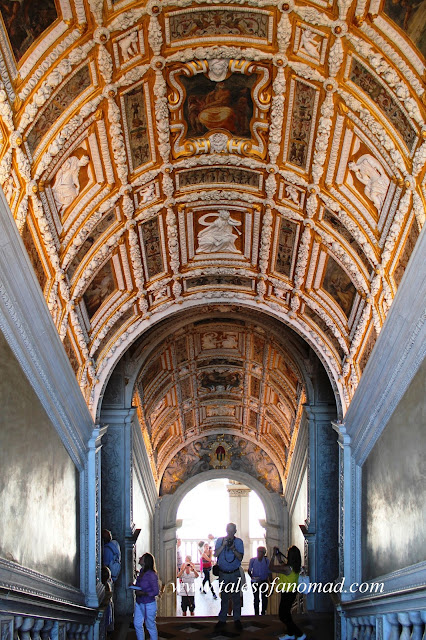 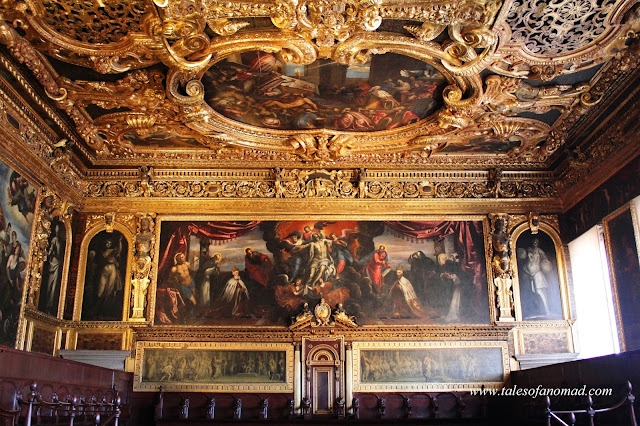 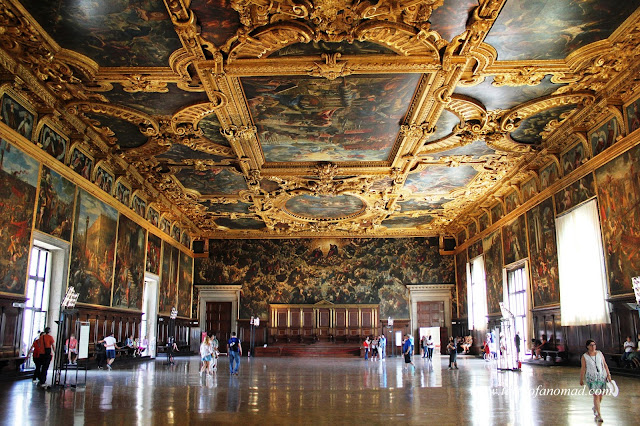 From San Marco sistiere, more cobbled streets and bridges leads to Dorsoduro sistiere which can also be reached by a boat. Galleria Dell' Accademia which is the most prominent museum in Venice is located in Dorsoduro. The gallery houses a huge collection of 19th century art and has works by Giovanni Bellini and many other popular artists. A short walk away is another popular museum, Peggy Guggenheim.

Towards the end of Dorsoduro and near the mouth of the Grand Canal lies Basilica Santa Maria Della Salute. Built in late 17th century in baroque architecture, the exterior is decorated with rich carvings and sculptures. Tall pillars, beautiful arches and the high altar inside display elements of Byzantine style. The basilica faces the canals, across which are numerous buildings with San Marco square in the distance. 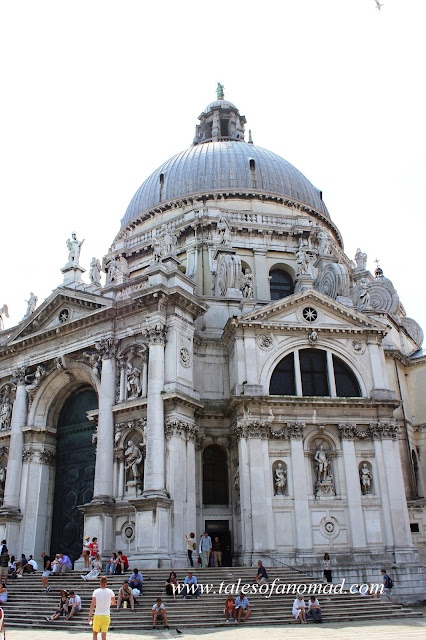 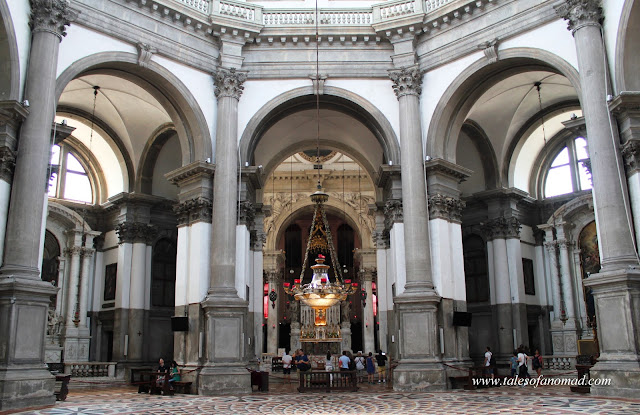 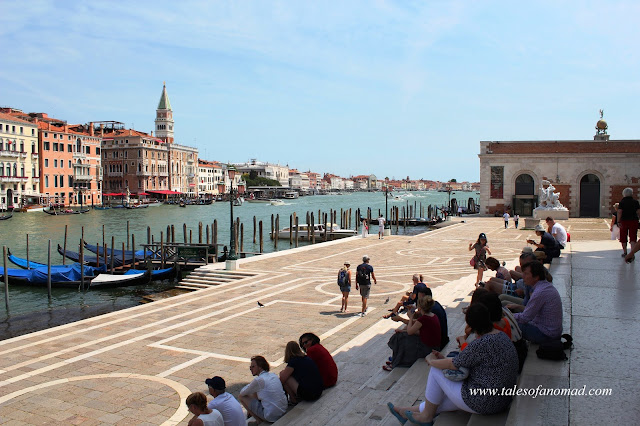 A short walk away from the basilica leads to the tip of the island which offers more beautiful vistas of the canals and the island of San Giorgio Maggiore which is popular for its church by the same name and a bell tower. 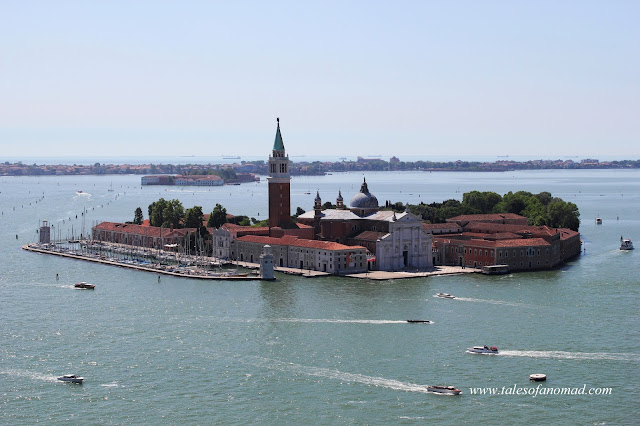 Venice is known for its masks which are referred as Venetian masks. They can be bought from any of the numerous shops near the Rialto Bridge. Amorino gelato is where I had the best gelatos in Italy. It is located near Rialto Bridge.

With its hustling streets, gorgeous canals, beautiful art works and age old buildings, all that Venice could do is encapsulate you in its quaint charm.

Marco Polo Venice International airport connects the city with many major European cities apart from a few Middle Eastern and American cities. St. Lucia station is the major railway station in Venice and there are frequent trains plying between Venice and other major cities of Italy. For transportation within Venice, water buses are the best option available. Buses and trams do ply in a few islands and on the mainland which are away from the popular tourist areas.

There are a wide range of options available from hostels to luxury hotels for travellers. I stayed at Venice Luxury, a pretty decent hostel in Cannaregio. Outdoor cafes mostly serve Italian fare. However, there are a few other world cuisines too available if you are ready to walk around.
Posted by R Niranjan Das at 9:54 AM