Ponmudi and Meenmutty Waterfalls: A Tryst with Nature 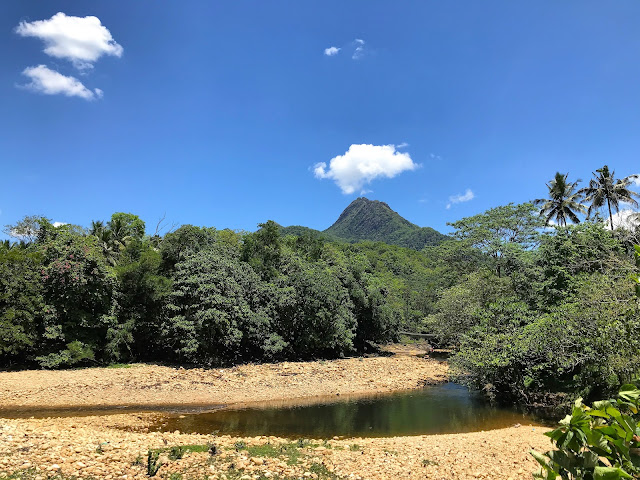 Whooshing wind greeted my face as I rolled down the window pane to enjoy the spellbinding view of the lush greenery and distant hills. The views were so captivating, that I stopped the car at multiple places to either capture the frame, or to just enjoy what nature presented before me. The sound of crickets, the winding narrow road, towering trees and the thin film of mist that hovered, made the drive up to Ponmudi from Kallar a delightful experience.

Ponmudi, nestled at a height of more than 3600 feet is known for its salubrious climate and small tea estates, and is a quick getaway for people residing in and around Thiruvananthapuram. While there aren’t too many places to explore here, the views from atop Ponmudi are an absolute delight. 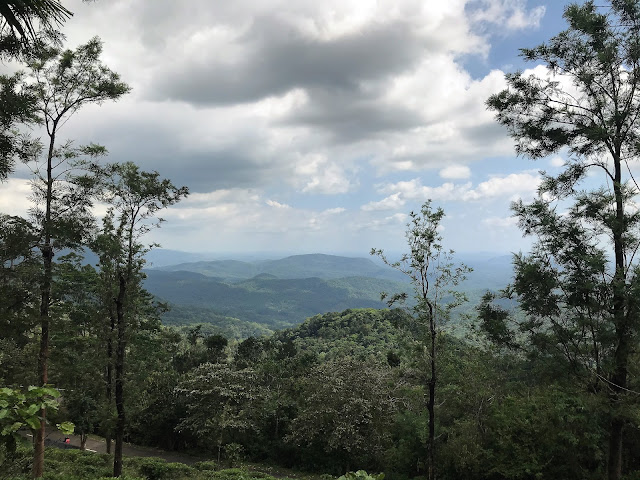 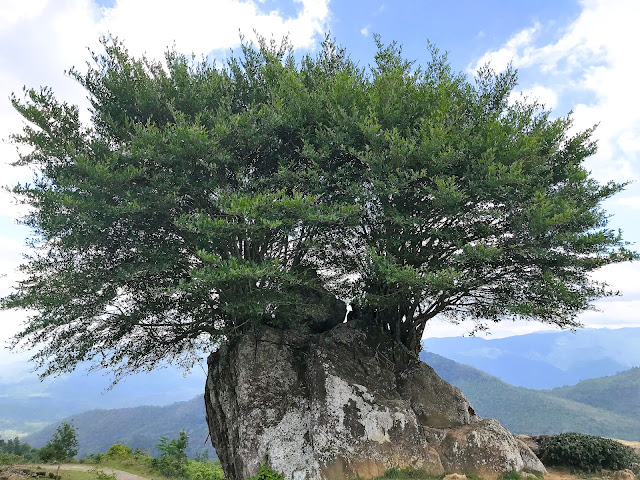 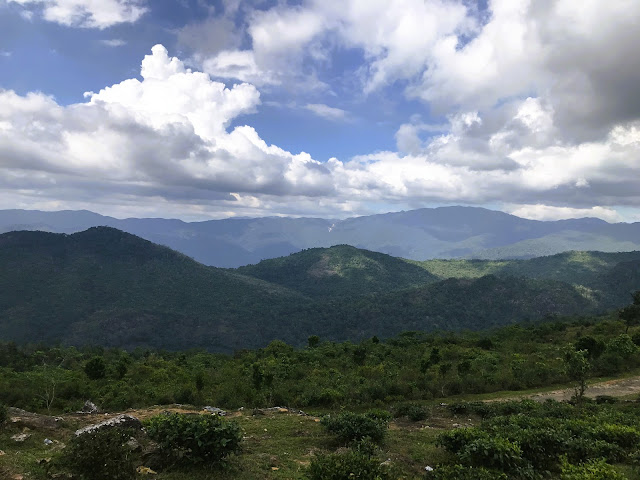 After meandering our way up, we had our first stop at Down Hill Viewpoint. Two trees outgrown from a rock creates a beautiful frame here, with undulating hills and deep valleys in the backdrop. While it looked like a large bonsai tree with a thick trunk and bushy leaves from a distance, it was only when we went near, that the rock made itself clearly visible. The road goes further down winding its way past small settlements and a school, before disappearing into the forests. Taking in the breath-taking views, we strolled around for a while before heading up further. 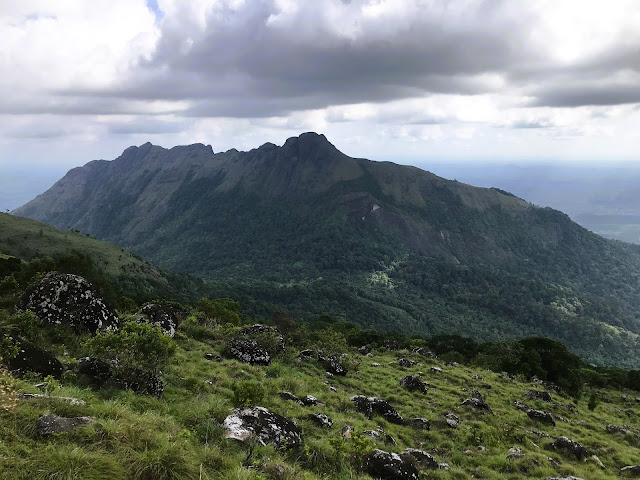 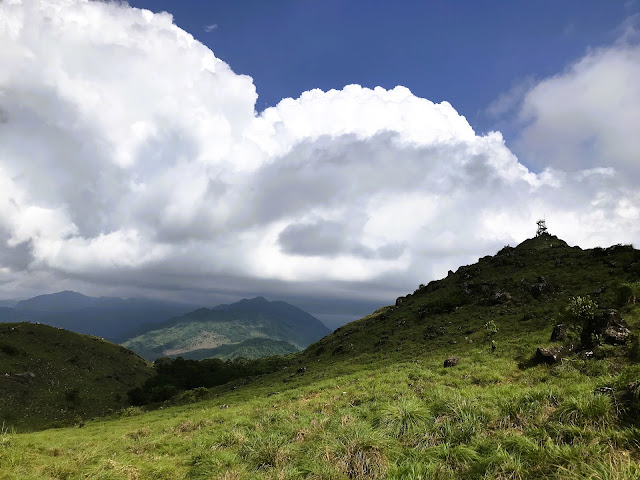 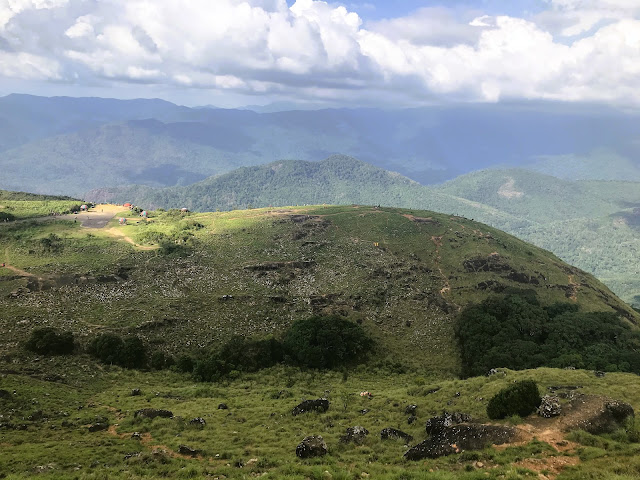 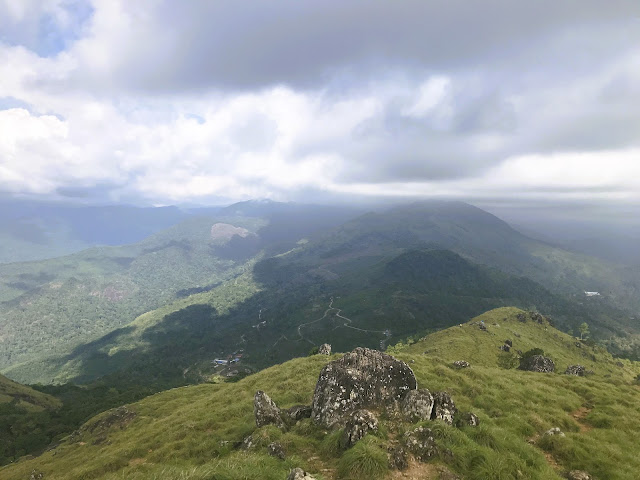 A forest check post welcomed us, as we neared Ponmudi hilltop, which was quite crowded, being a weekend. Walked up the many trails that lead up to numerous mounds, which offered spectacular panoramic views of distant hills, valleys and lush greenery all around. Jutting rocks scattered amidst the tall grasses and fluffy white clouds floating above made the frames prettier. A path led up to an abandoned sanatorium, which probably was built during the rule of the British. Walking down, I headed up another trail that led me to the watch tower, which stood tall atop the highest mound here. A short climb, and I was greeted to more panoramic vistas of the magnificent verdant surroundings. 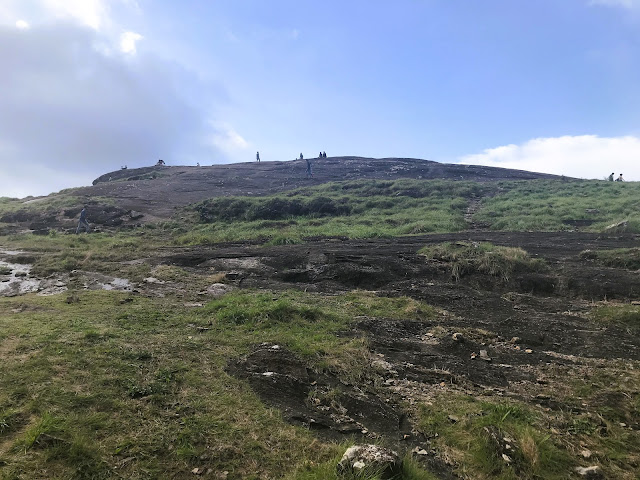 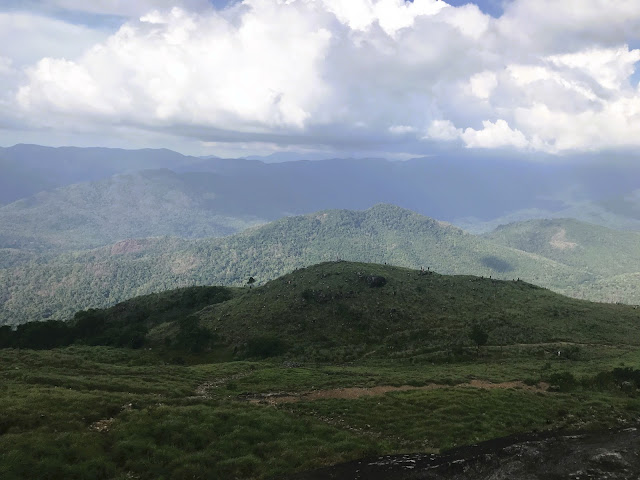 A wide swathe of rock jutting amidst the greenery and mounds was my last climb. The mist had disappeared by then, but the breeze blew stronger, filling my ears with its rumbling sound. However, I enjoyed my tryst with nature, as the scenic setting and fresh air of Ponmudi ensured it was a memorable one. As the sun set, the crowds thinned, darkness slowly engulfed the hilltop, and it turned cold as we drove through the beautiful road back to Kallar. Entry to Ponmudi is only from 8 AM to 4 PM 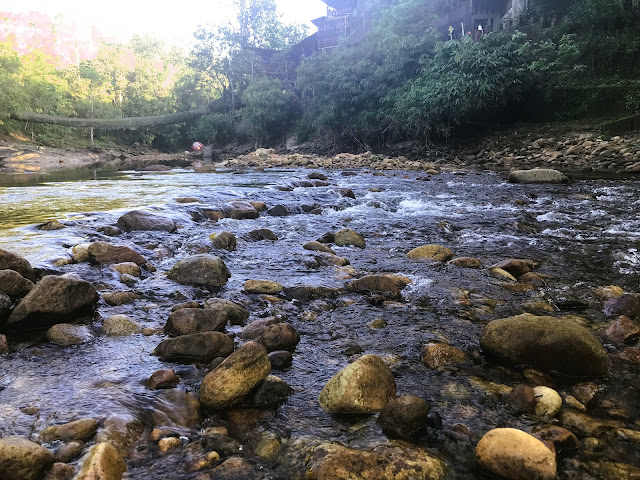 Waking up the next morning to the calls of a peacock was undoubtedly the best alarm clock that got me out of bed. The wonderful River County Resort by the banks of the Kallar river was where we stayed. I made my way through the lush green environs of the property to the banks of the river. The river bed was laced with innumerable pebbles and the water levels were so low that I could wade through them. As I perched myself on the pebbles, the only sound I could hear was the gurgling of waters, which were intermittently interrupted by the peacock calls. 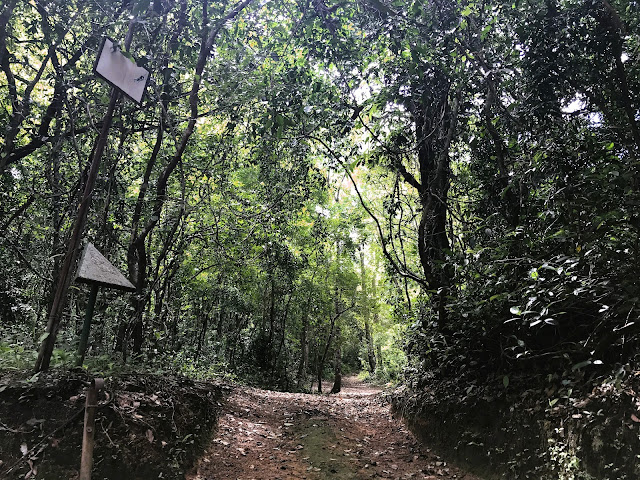 After breakfast we drove to Meenmutty Waterfalls, formed by the Kallar river as it cascades over rocks inside a forest. The locals say that the waterfalls got its name as fishes could not swim beyond this point due to the presence of rocks. The 2 km long trail through the forest with the river for constant company was a delightful experience. While there are forest guards assigned at intermittent junctions, most part of the trail was devoid of human presence. 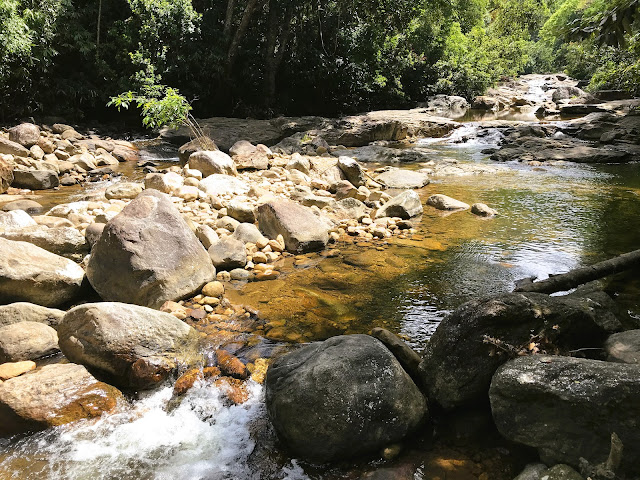 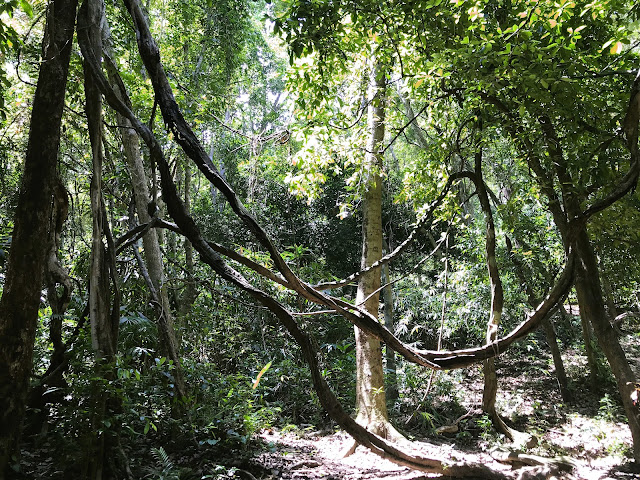 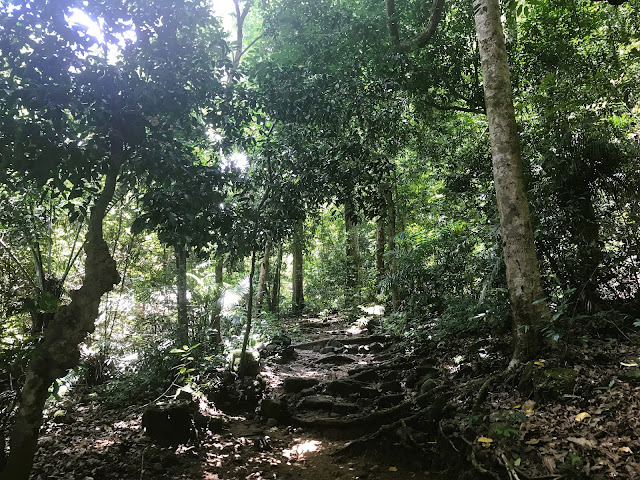 The initial stretch was a mostly plain, snaking its way past tall trees, shrubs, fallen branches and tree trunks with mushrooms and ferns. A couple of places where we could get into the waters too showed up. Tumbling over small boulders, the Kallar river made its way gurgling through this forest. The path made captivating frames in some stretches with trees leaning into each other and forming a head cover. The tall trees, dense canopy, and foliage, with the gurgling sound of the waters and sunlight percolating through, gave us reminders that we were deep inside a forest. Roots of the trees in some places had naturally made steps, and dangling branches had formed into swings, which made me wonder if that was a welcoming sign from nature to explore her. 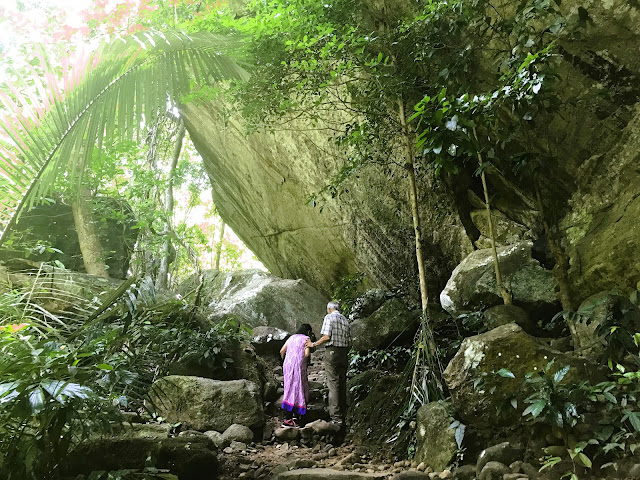 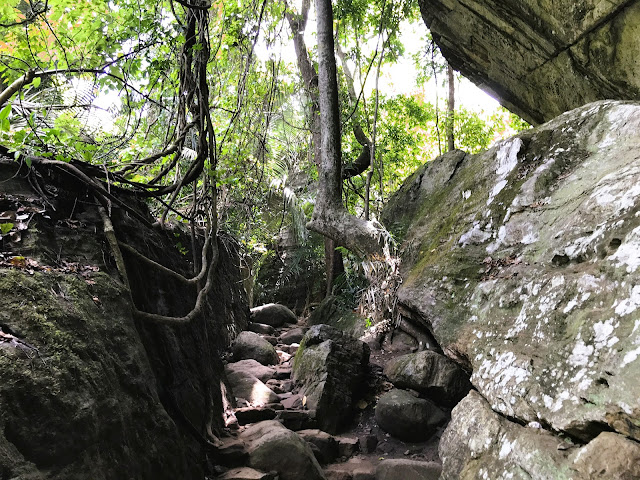 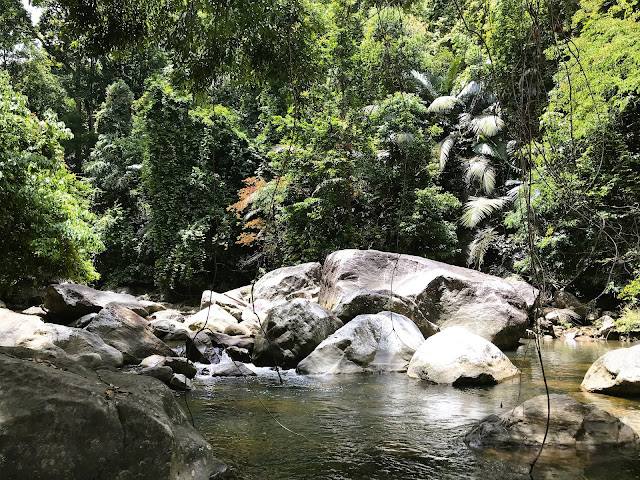 We trudged forward and the gradient gradually turned steeper taking us deeper into the belly of the forest. Beyond midway, an enormously large boulder balancing itself on another one formed a beautiful cave like structure, where we rested up, and chatted with the forest guard, who spoke stories of animal attacks here long back. Shortly later, the river showed up before us, and we had to cross it to get to the other bank to continue our trek. Placing our steps precariously over small rocks that acted as a stone bridge, we made our way across. A short climb up, and we were gazing at Meenmutty Waterfalls cascading over huge boulders and thrashing into the large pool at the base, before making its way down through the forest. The multi-tiered waterfalls with lush greenery and boulders in the backdrop made a picturesque frame. We relaxed there for while, and chatted up with the forest guard, who was friendly enough to take our pictures.

As we headed back from the waterfalls, I was happy that we went all the way, despite being a slightly tough one for my parents, who seemed more than enthusiastic to have completed the trek. Ponmudi is a delightful small hill station, ideal for a weekend getaway, with charming viewpoints, captivating panoramic landscapes, and the spectacular trek to Meenmutty Waterfalls.

How to reach Ponmudi:

Thiruvananthapuram, which has an airport and railway station is the closest major city, 56 km away. There are buses plying between Thiruvananthapuram and Ponmudi, but is not frequent. It is recommended to visit Ponmudi in your own vehicle so that you can enjoy the forest drive.

There are quite a few resorts and homestays at Kallar, at the base of Ponmudi Hill. Atop Ponmudi, there is a government owned resort. River County Resort in Kallar is well recommended. There are numerous eateries at Kallar, and a couple of them atop Ponmudi.