Triund: A Trek through Mist and Boulders 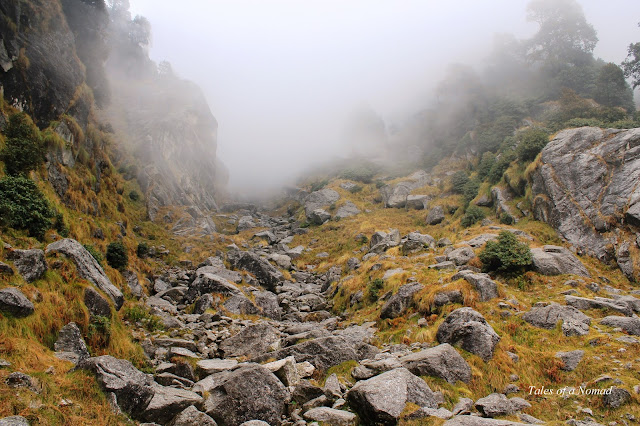 Mcleodganj has been a backpacker’s haven with travellers, hippies and adventure enthusiasts thronging this Buddhist hill town over the years. With red robed Buddhist monks making Mcleodganj their revered home, the charm of the place has further accentuated. Along with innumerable shops selling myriad collectibles and clothing, and some lovely cafes offering a wide range of cuisines, Mcleodganj has definitely made a mark for itself on the traveller’s map. A popular activity here which most visitors enjoy is the trek to Triund, which is a couple of hours from Dharamkot, Mcleodganj’s next door village.


I initially thought I got misled by the locals while finding the trek route from Dharamkot to Galu temple. I was the only one on the stretch and the route definitely didn’t seem like a trekking route. It seemed more like the trail the locals take to commute. I slowly realized that I was right and had taken the wrong route. However, the trail still led me to Galu temple after a while, albeit the tough climb. Galu café nearby is a marker on this trek and next to it is the forest entry where trekkers need to give their details before trekking further.

The sun was warming up and it was a tough hike all the way until the temple but from then on it was walk through the shades of stooping trees. The initial walk became a hike and then a trek as I trudged along the ridges chiseled on the slopes of the gigantic Dauladhar range. En-route, a few vantage points popped up offering magnificent views of the valley, intimidating mountains and also of Galu temple and Dharamkot village in the distance. The route had many trekkers who were headed up and quite a number of people who were headed back to the base after camping atop Triund the previous night. The trek also had horses carrying various items for the shops at the top. There were quite a few tiny shops that sold short eats and thirst quenchers on the way. I did stop at many of those for a tea and the most popular among them is Magic View Café, which proudly states that it is the oldest café on this trek and has been present since 1984. The café is the midpoint on the trek and offers panoramic views of the valley. There is also a small settlement nearby who are mostly shepherds. 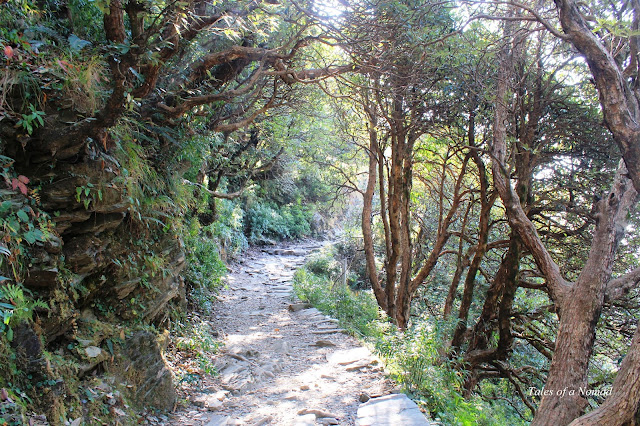 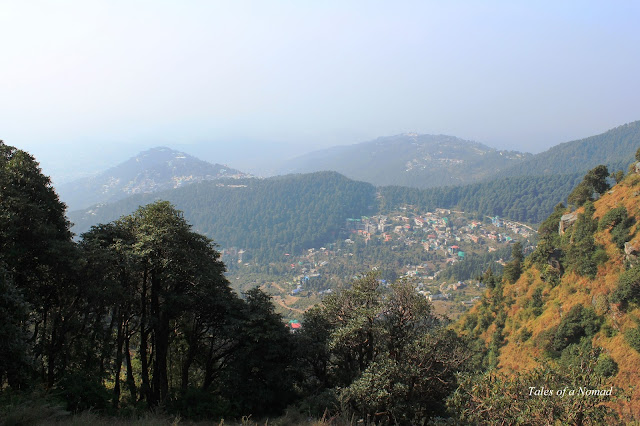 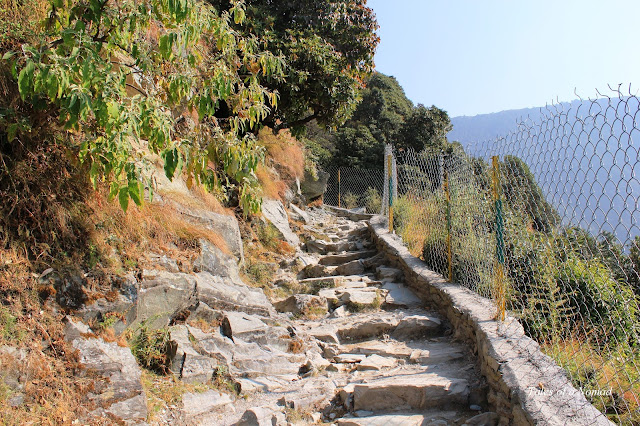 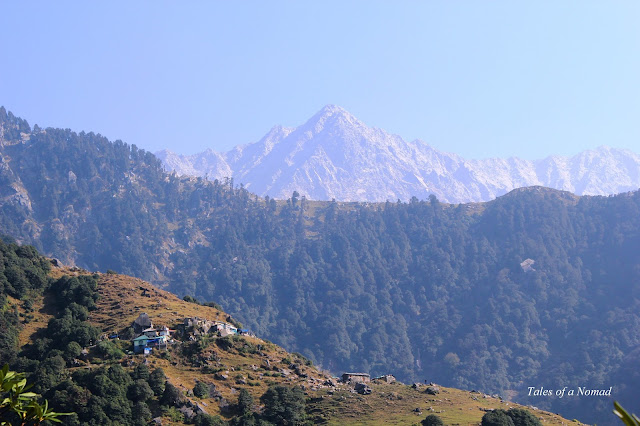 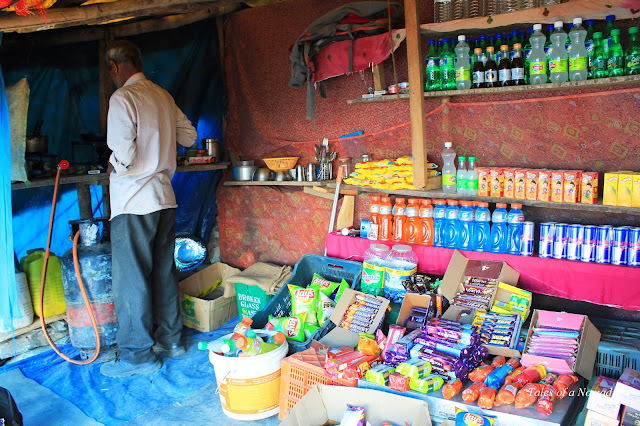 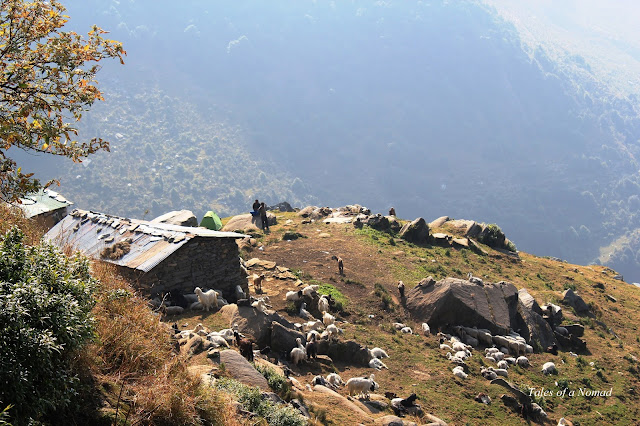 I hiked further and slowly the surroundings changed from the narrow trail paths lined with trees to large boulders, floating mist and interspersed forest stretches. It looked beautiful as the mist engulfed the trail often and the temperature dropped too. Mountain dogs popped up from nowhere and the gradient turned steep gradually. Clambering over rocks at certain places, the trail turned fascinating as the landscape was absolutely stunning all the way. Strewn with boulders, the mountains looked absolutely picturesque. The final stretch to the summit was quite steep and I took it slow to reach the top after two and a half hours from Galu temple. 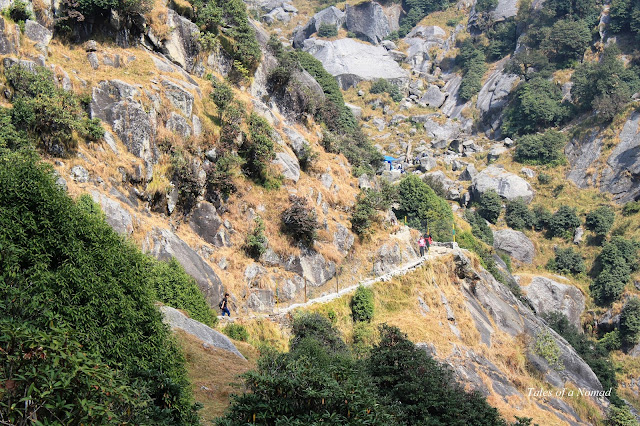 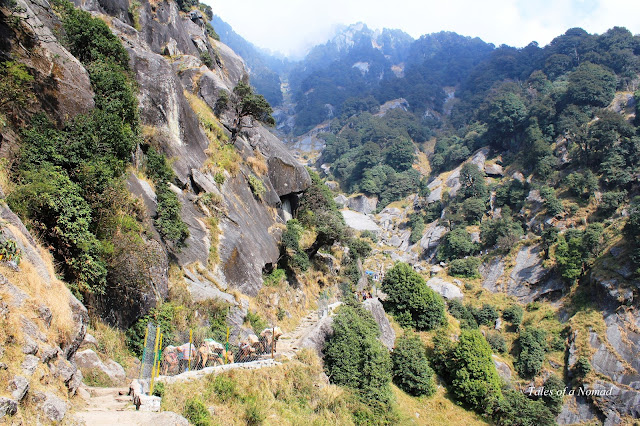 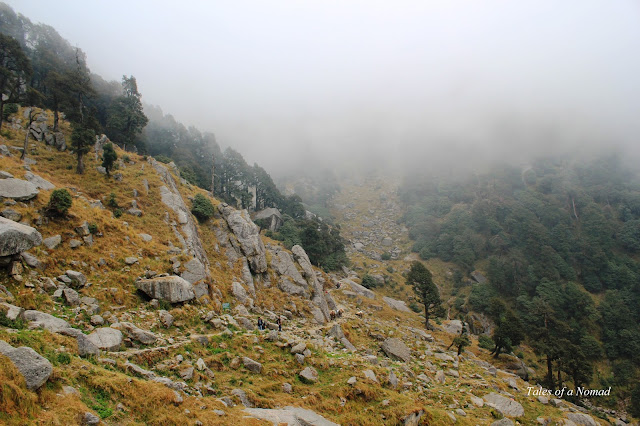 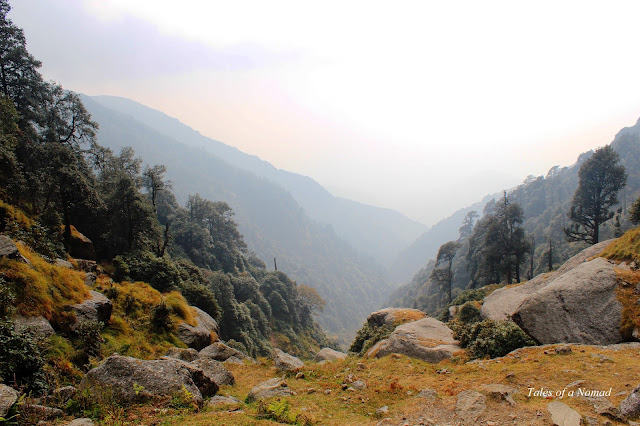 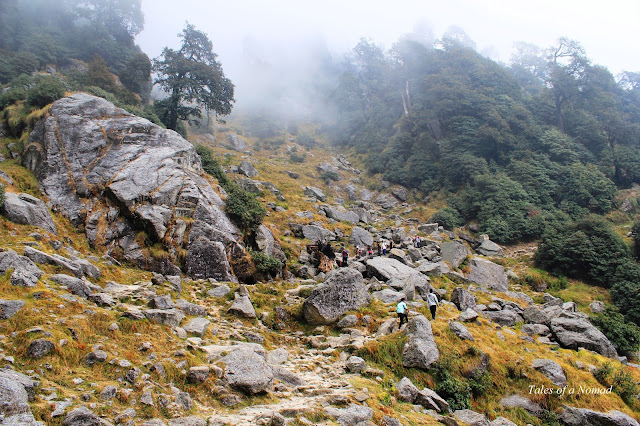 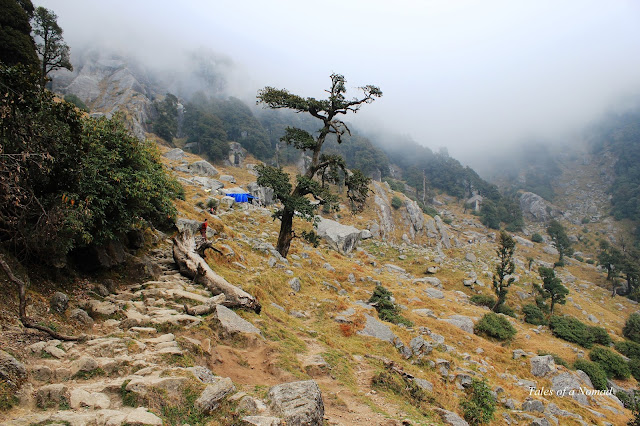 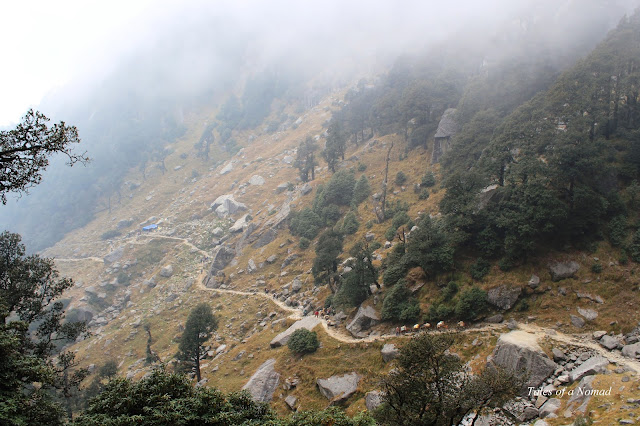 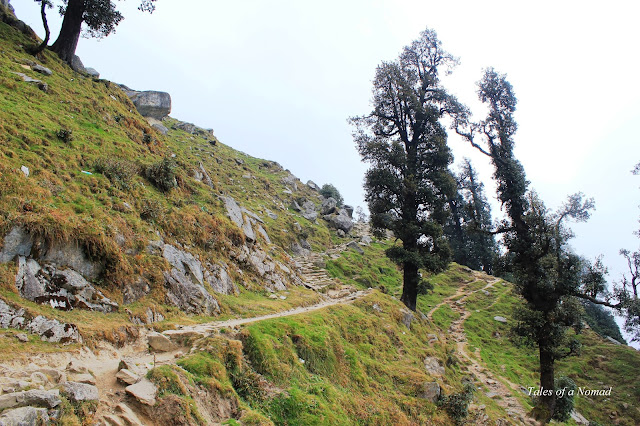 Triund top was not clearly visible as the mist kept engulfing the place intermittently. However, when the mist cleared, the gorgeous views of the valleys and mountains opened up. I walked around for a while, enjoyed the views and had some hot tea with maggi as the mist continued the hide and seek game. The colourful tents and prayer flags against the green backdrop made a gorgeous frame. Many trekkers camp overnight atop Triund and there are many providers for the same.  I was recommended by many to visit snowline, which lies 5 kms ahead of Triund at 3350 meters. Lahesh caves and Indrahar pass are further ahead of snowline. However, the snowline looks beautiful during the winter months and with absolutely no snow, I decided to skip the trek further. 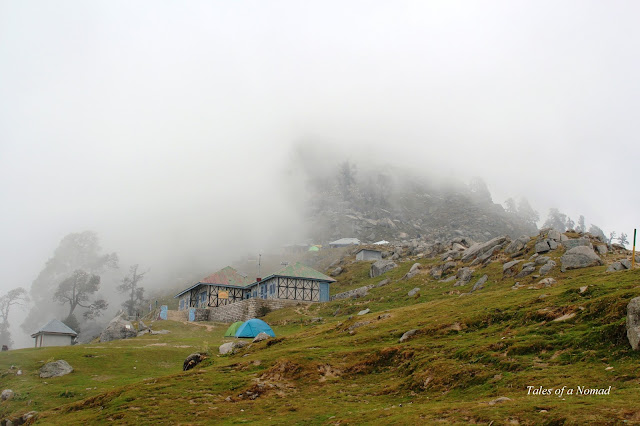 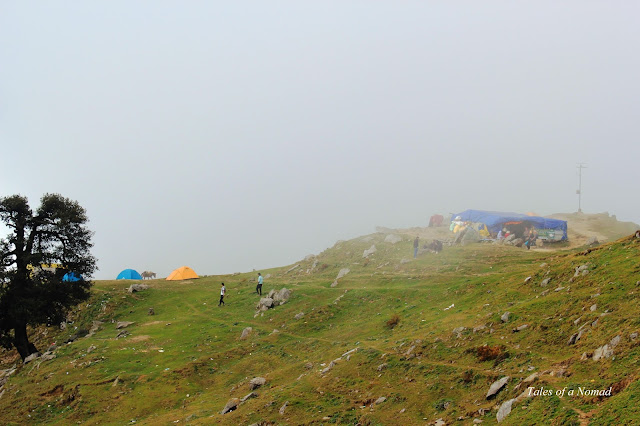 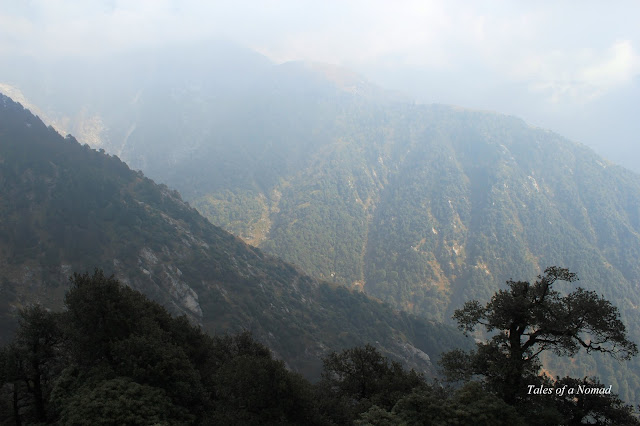 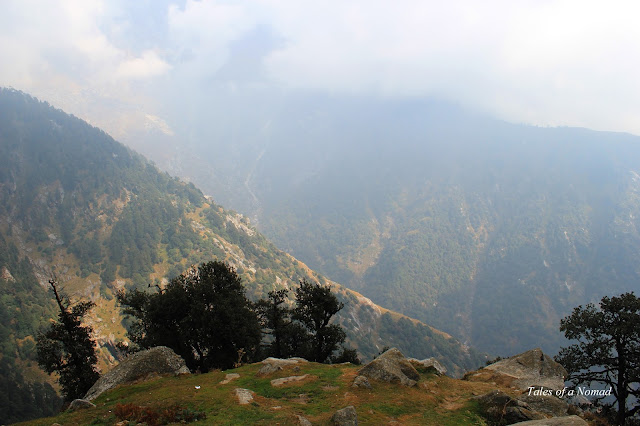 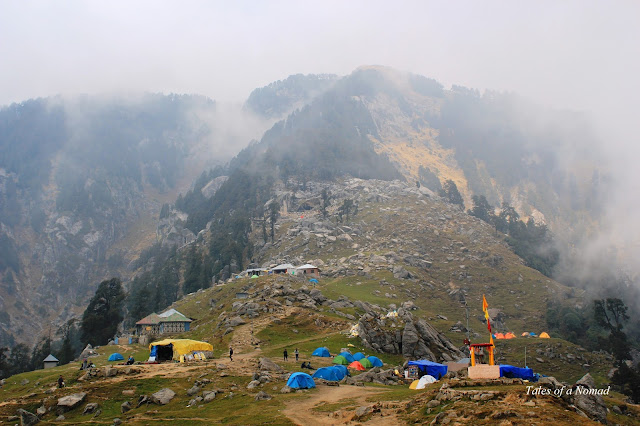 The return was much quicker with more beautiful views and tea stops in between. On the way back I made sure to take the right route this time from the temple and the path led me through numerous deodhar trees back to Dharamkot. The magnificent landscapes are definitely the highlight of this trek and with numerous trekkers, horses, dogs, views and mist for company, the trek to Triund is an ideal way to lose yourself amidst the nature while in Mcleodganj.