Gokarna and its Beaches 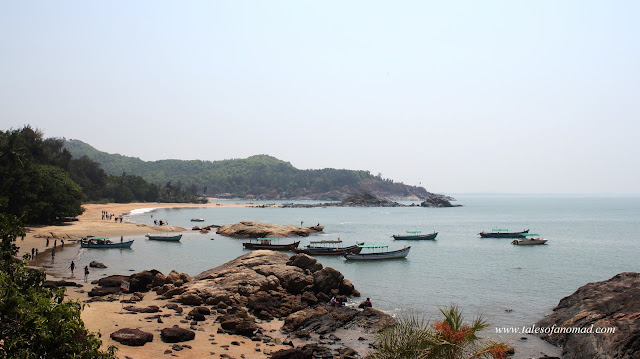 The sun was all set to retire for the day as I took the detour from Gokarna town to Om beach.  Enroute, sunset over the cove shaped Kudle beach as I rode along the fringes of the hills was a sight to behold. It is a nice little valley that extends into the beach when seen from the vantage point. This is definitely one of the best views in this secluded coastal town known for its temples and beaches.  I stood there for a while, gazed at the beautiful frame and rode ahead to Om beach when darkness engulfed as the sun slid down the horizon.

With the ancient Mahabaleshwar temple dedicated to Shiva, Gokarna has always remained a popular pilgrim centre.  However, when Goa became too crowded in the 80’s and 90’s, the bohemian crowd trudged south to settle on the serene beaches of Gokarna. It is presently a favoured destination of budget travellers and it is common to find pilgrims, backpackers, Buddhist monks, foreign travellers and beach trekkers rub shoulders in this lovely coastal hamlet in north Karnataka.

Om beach is probably the most popular place in Gokarna and Namaste café, a preferred place to relax. After relishing a tuna sandwich for breakfast (Namaste café’s tuna sandwich is the best I have ever had), I walked past the jutting rocks on Om beach. Referred to as Parvati rocks, they are spread majorly over the middle and northern stretch of the beach. The rocks are lovely vantage points to enjoy sunsets. The trees in the background which provide a long stretch of shade, stoop low to kiss the wading waves. In the shape of an inverted Om symbol, Om beach gets its name from the same. The beach was devoid of the crowd, except for a few people sitting on the rocks and enjoying their solitude, a couple of yoga practitioners and a few early morning walkers. Cows are ubiquitous here and can be seen in numerous numbers on the beach. There are more cafes towards the southern stretch which ends at a hill. As the sun was yet to warm up for another summer morning, the walk turned out to be a pleasant one. 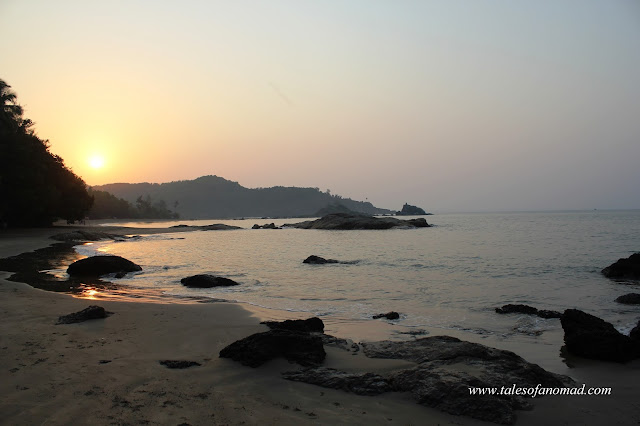 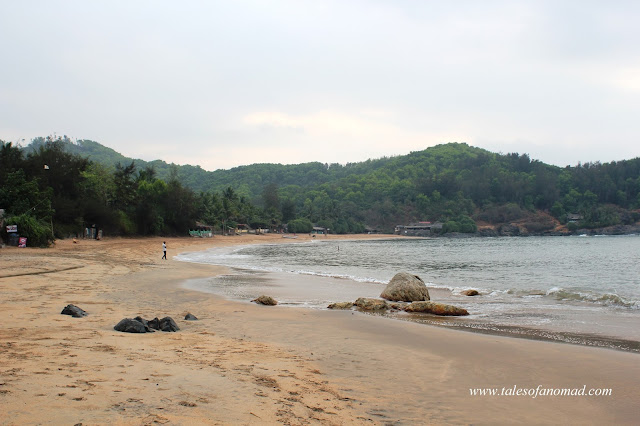 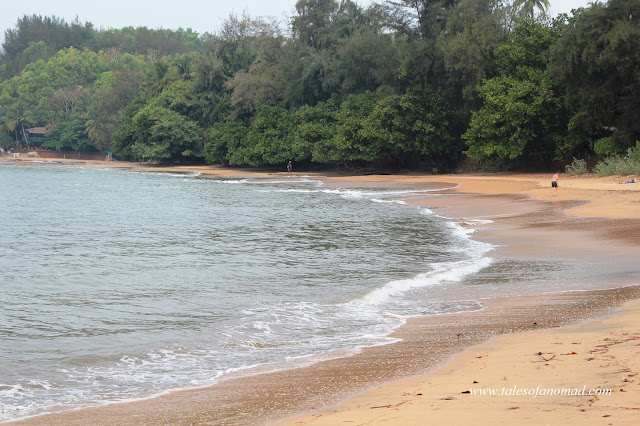 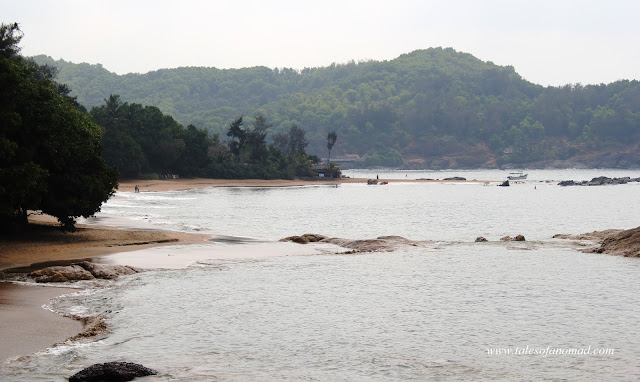 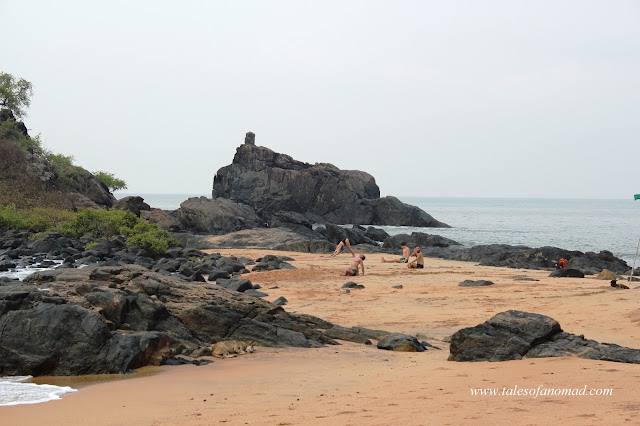 At the end of Om beach, I walked behind the last café onto a narrow trail through the bushes to Half moon beach. The path goes along the ridge of a hill and slowly vistas popped up through the bushes. The gorgeous frame of the expansive Arabian sea, the slanting coconut trees and rocks was a delightful company on the trail ahead. Midway, I took a short detour to a lone coconut tree jutting from an extended hillock. As I gazed at the beautiful sea and Om beach far away, spotted a couple of dolphins going about their acrobatics. Such a wonderful sight. The trek led further through more precarious paths before going down the hill to Half moon beach. A secluded cove beach, Half moon is accessible only by trek or by a boat ride from Om beach. There are a couple of shacks, and the whole day can be spent counting the waves, chasing crabs and gazing at the beautiful sky at night. 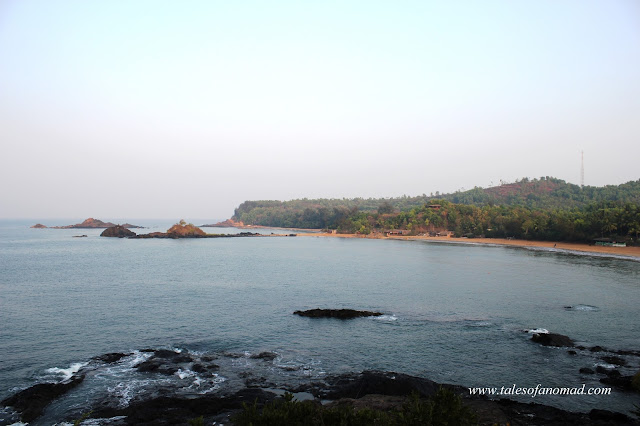 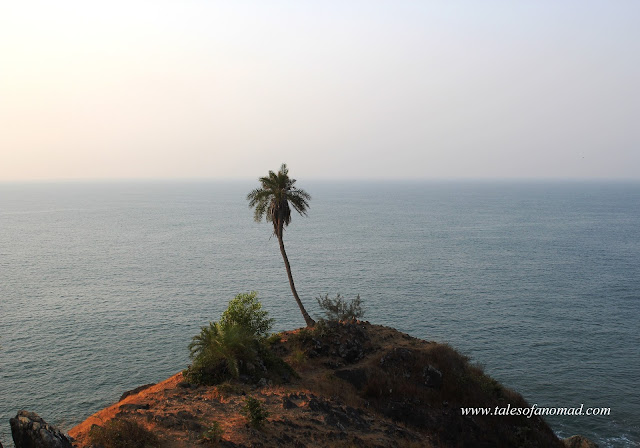 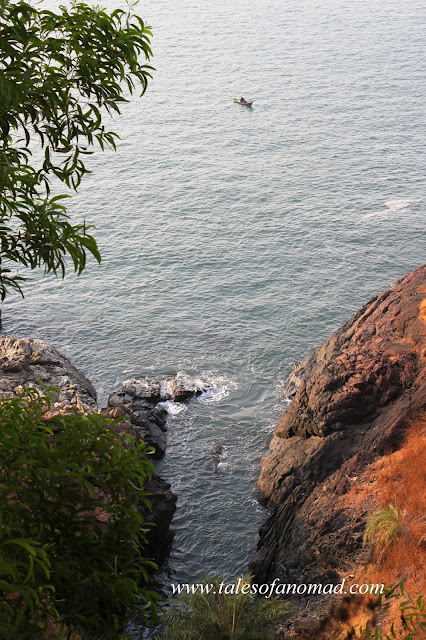 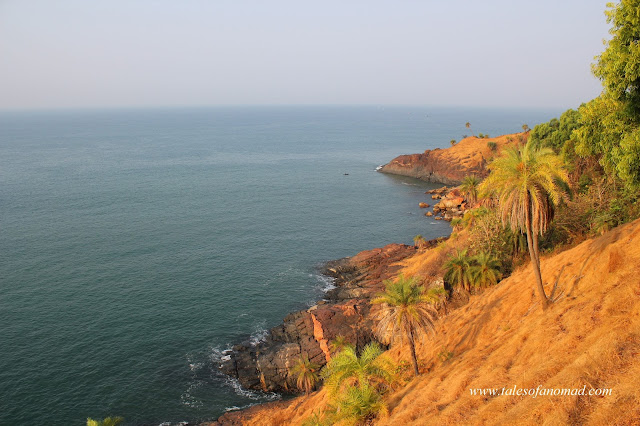 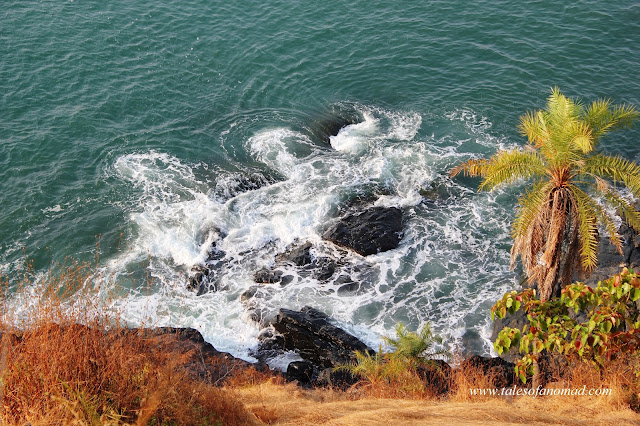 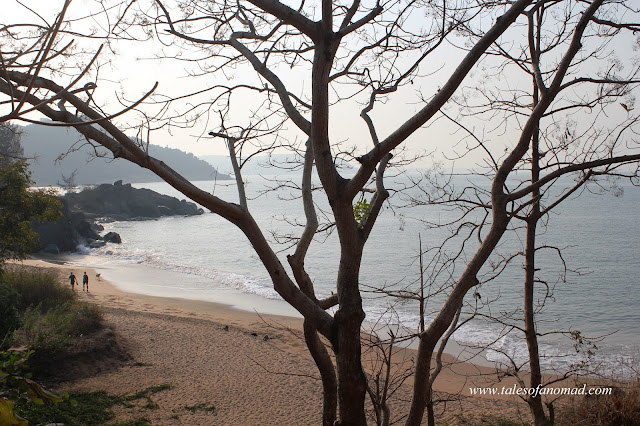 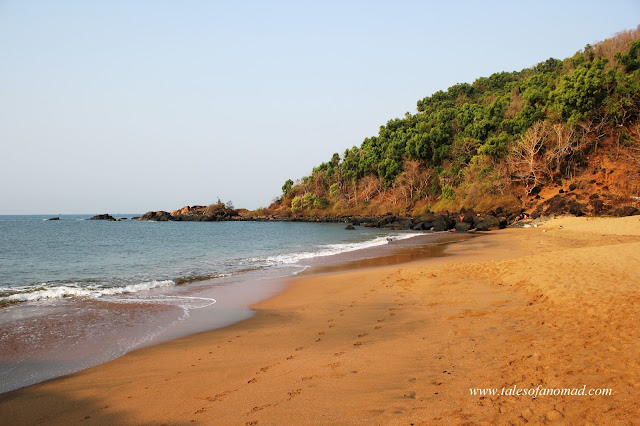 Further south, the trail goes behind the shacks and one needs to clamber over a couple of rocks. It was a bit risky and I took the longer route over the hill. However, it turned out that this was tougher than the one over the rocks. The rocky trail ends at the tiny Small hell beach. I wasn’t alone from there on, as a lone dog followed me. We went past more vantage points, rocks and narrow trails towards Paradise beach. We sat idle and gazed at the beautiful vistas of the unending sea at quite a few points. Beyond more rocks, Paradise beach showed up from a distance. With coconut trees, hippie crowd and beautiful views, Paradise beach stands true to its name. All that one can do here is read a book under the shade, catch some sleep on a hammock, go for a dip in the sea or listen to some soulful music. How inviting is that? There aren’t any shacks here, but visitors hang out here on hammocks and tents. The lone shop here offers tea, omelets and basic food. Paradise beach is definitely the place to head to in Gokarna if you are keen on beach camping and staying away from the crowd. Trek and boat are the only means to reach here, and that makes it all the more secluded. I sat under the trees, had a lazy brunch, a few cups of tea, watched people perform acrobatics, saw dolphins and gazed at the sea in oblivion. Late in the afternoon I reluctantly took a boat back to Om beach. The ride back offered nice views of the beaches, hills and rocks which I had trespassed on my way to Paradise beach. 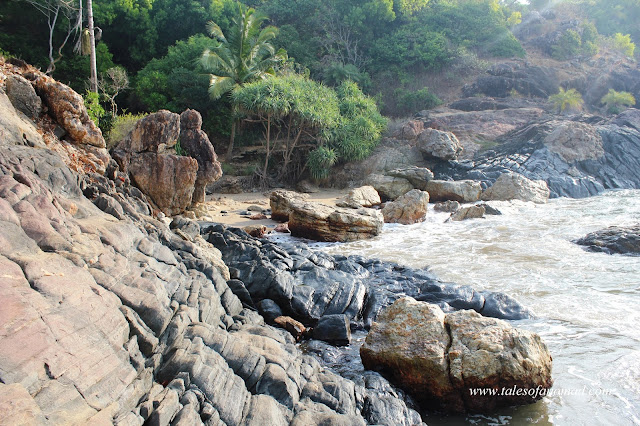 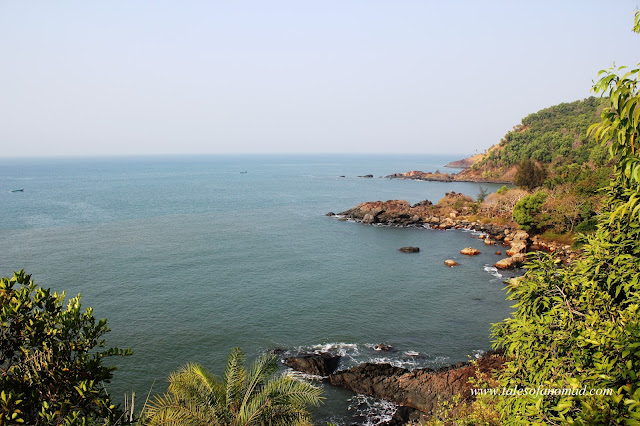 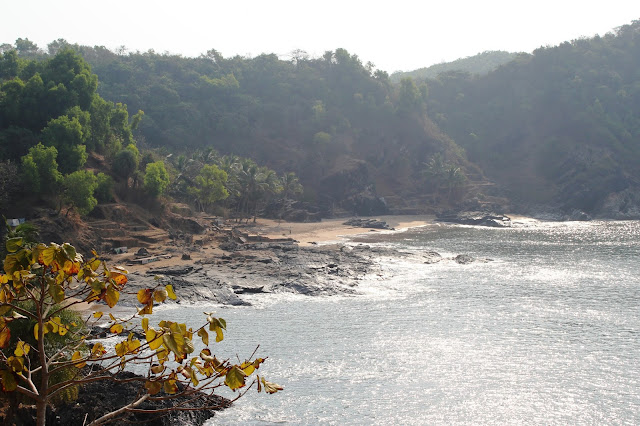 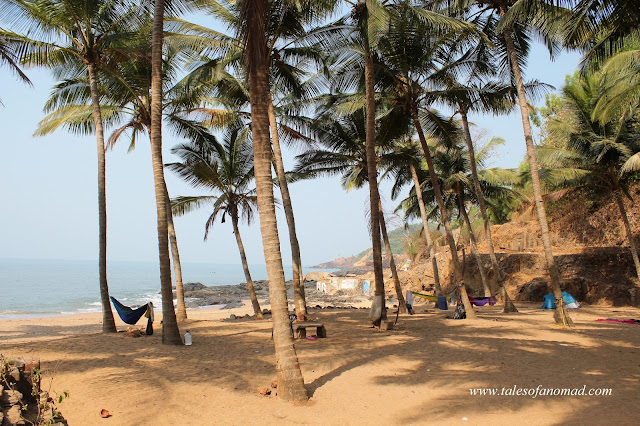 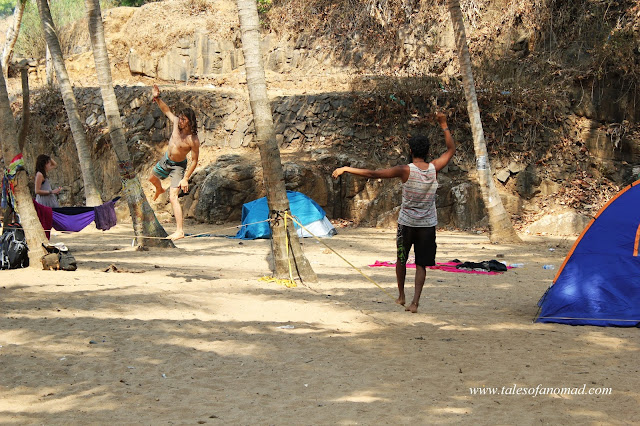 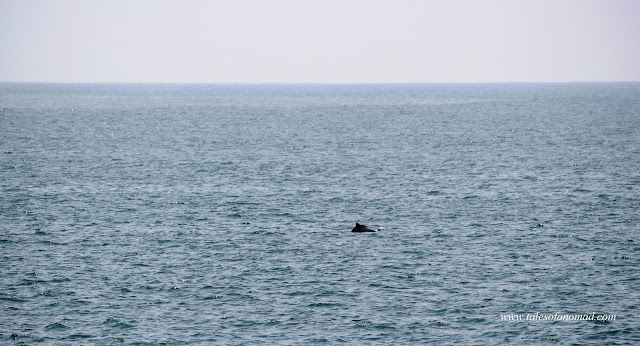 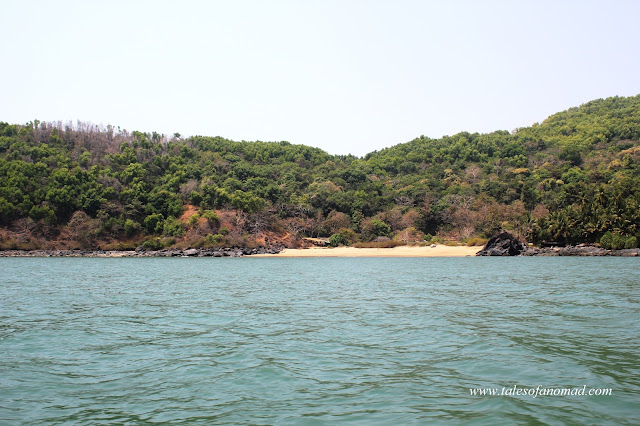 It is relatively an easy trek from Om beach to Kudle beach. Trail goes through a park at the northern end of Om beach and then over a flat bedded hillock before getting on a mud trail that meanders its way down to Kudle beach. The open beach is devoid of trees or shade like the other three beaches and that made my walk a tiring one. However, there are more shacks here than other beaches in Gokarna. With nice views of the beautiful beach, these shacks are ideal to sip a beer and watch the sun go down. Kudle beach is well recommended for a dip as it comparatively has lesser rocks. As the sun goes down and the temperatures dip, a walk on this beach is a nice way to welcome the night. The aerial view of Kudle is a beautiful frame. 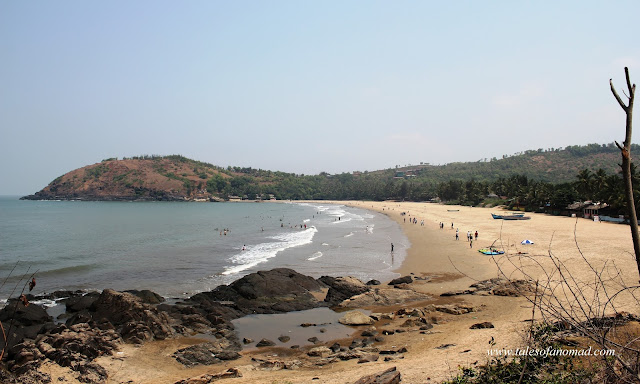 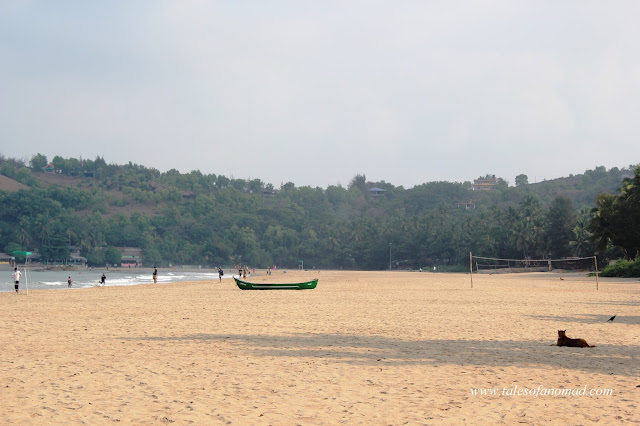 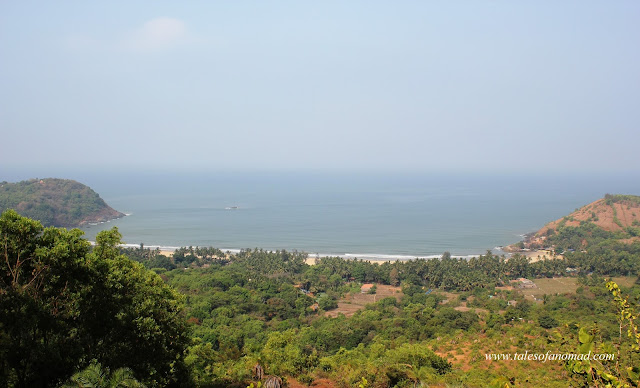 The next day began with an early morning ride to Gokarna town and Mahabaleshwar temple. A typical temple town lined with numerous shops selling temple paraphernalia and a host of other items. Halakki tribal women can be spotted selling offering to the deity near the entrance of the temple. Dressed in colourful attire, Halakki tribes are indigenous to Gokarana and surrounding regions, but are mostly found around the temple premises. The road that leads to the temple goes past numerous colourful houses and ends at Gokarna main beach, which lies behind Mahabaleshwar temple. As per legend, it is recommended to take a dip in the beach before entering the temple. I had a short stroll along the beach which had an influx of both pilgrims and visitors. Mahabaleshwar temple is a revered one and is believed that it houses the atmalinga which Ravana could not carry home to Lanka as he was duped by Ganapathy. Celebrations galore during Shivaratri here and hordes of pilgrims throng the temple street during that time. Mahaganapathy temple is another popular place of worship on the same street. 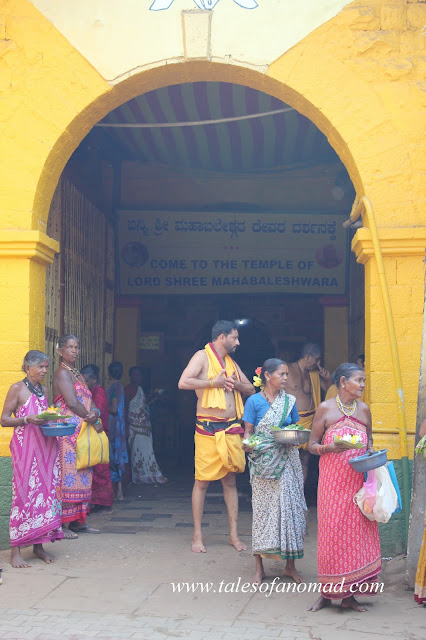 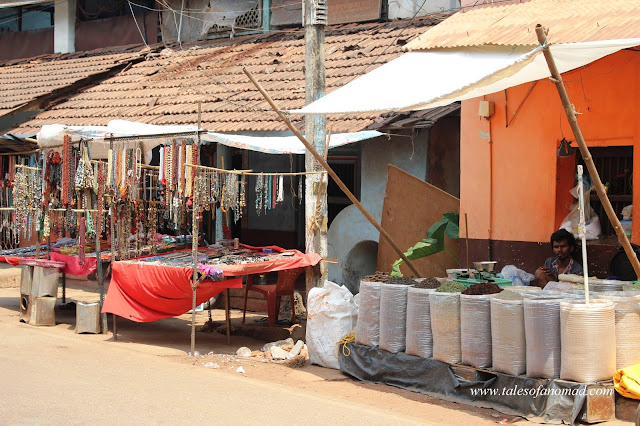 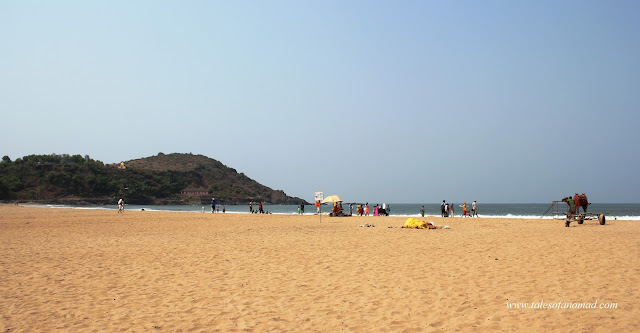 Post the temple visit, rode out of Gokarna and took a detour to Tadadi, a small fishing port. Located at the estuary of Aghanashini river, this small fishing hamlet has a few beaches. Beyond Tadadi, the road runs along the backwaters of the river to the beach. Though google maps showed the beach as God’s own beach, the locals whom I spoke to mentioned it as an extension of Paradise beach. Paradise beach lies to the north of Tadadi and can be accessed by a trek over the hills. The road beyond Tadadi ends at the mud road that leads to Paradise beach. The beaches in Tadadi are rocky and have a couple of shacks and home stays. 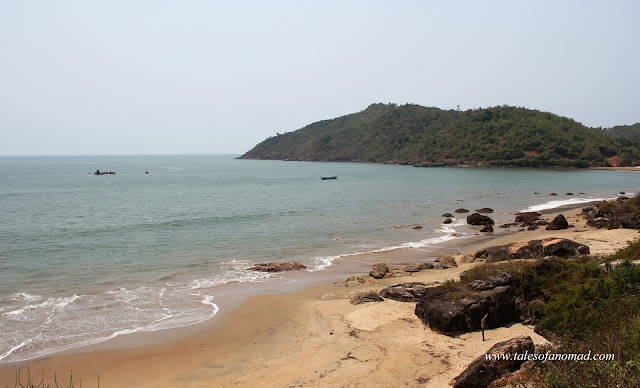 Back in Gokarna, I spent the evening watching the sunset from the rocky perches of Om beach. Though the sunset angle wasn’t very appealing (Kudle beach offers a better view), evenings on the rocks of Om beach are always serene. 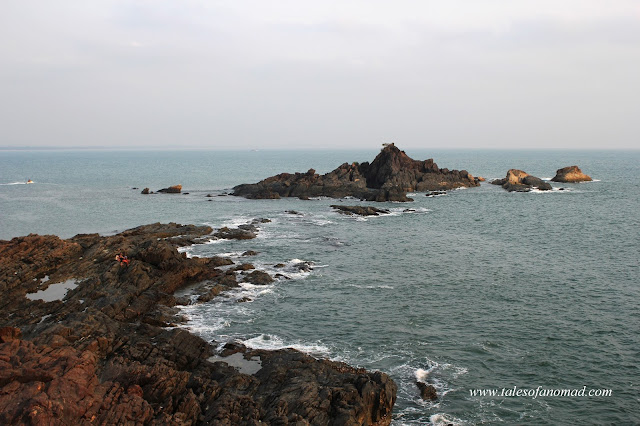 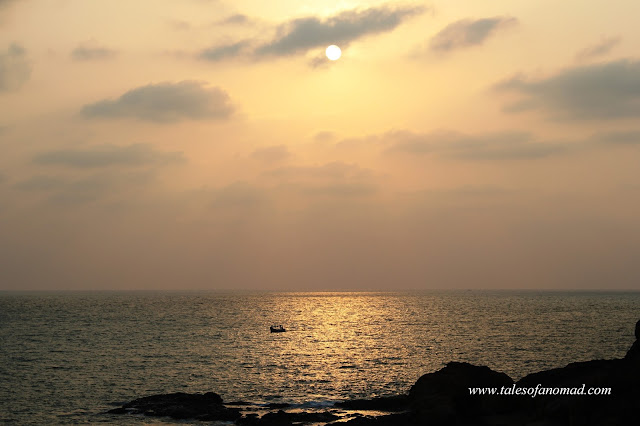 Uttara Kannada, Karnataka
The closest airport is at Dabolim, Goa (155 Kms). The nearest rail head is at Gokarna Road (12 Kms). There are buses plying from Kumta, Karwar and Honnavar to Gokarna. Bangalore is 491 Kms from Gokarna. Om beach is 6 Kms from Gokarna town.

Om beach and Kudle beach have numerous shacks with budget accommodation. There are luxury options too near Om beach. Gokarna town has a few lodges majorly targeted at pilgrims visiting the temple. Namaste café on Om beach is neatly designed along with slopes of a hill and its café opens out into the beach.  Sunset café on Kudle beach is well recommended. Sea food is a specialty at most of the cafes. Tuna sandwich at Namaste café is a must try. There are vegetarian restaurants in Gokarna town, near the temple.
Posted by R Niranjan Das at 10:44 AM