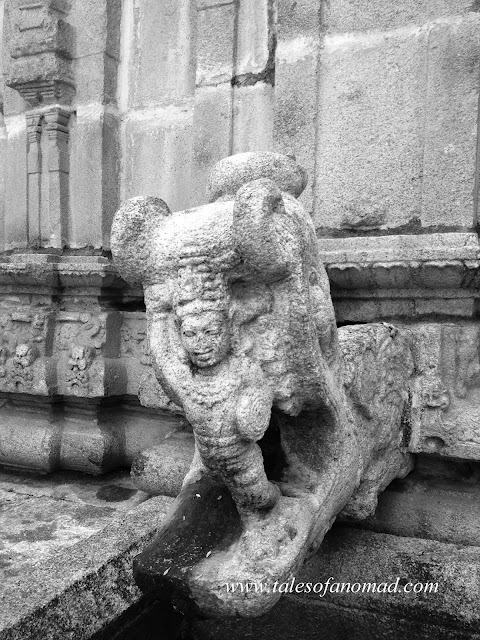 The magenta sari of the bride made a stark contrast against the dark grey outer walls of the inner sanctum. The newly wedded couple with beaming smiles posed for photographs after taking the blessings of Bhoganandeeshwara. Despite being a crowded day, a marriage entourage was the least of the expected visitors at this beautiful temple at the base of Nandi Hills.

Nandi hills is one of the popular short getaways from Bangalore with winding roads, panoramic vistas, Tipu's history, fort walls and Yoganarasimha temple. However, Bhoganandeeshwara temple tucked away at the base of the hills is frequented more by pilgrims than travellers. With exquisite architecture, sculptures and ornate pillars, this temple is a perfect example of Dravidian architectural style. Built in 810 AD by Ratnavali, consort to Bana king, Vidhyadhara, The temple has had many additional contributions later by Chola, Hoyasala and Vijyanagara rulers and their styles are quite evident.

I strolled along gazing at the line of pillars with figurines carved on them and the huge Nandi structure facing the inner sanctum. In addition to the main shrine of Bhoganandeeshwara, there are two more, namely, Arunachaleshwara and Umamahehwara, all adjacent to each other on an elevated dais. I circumambulated the inner sanctum along the wide corridor to notice that the outer wall too had no dearth of fine art work and designs. 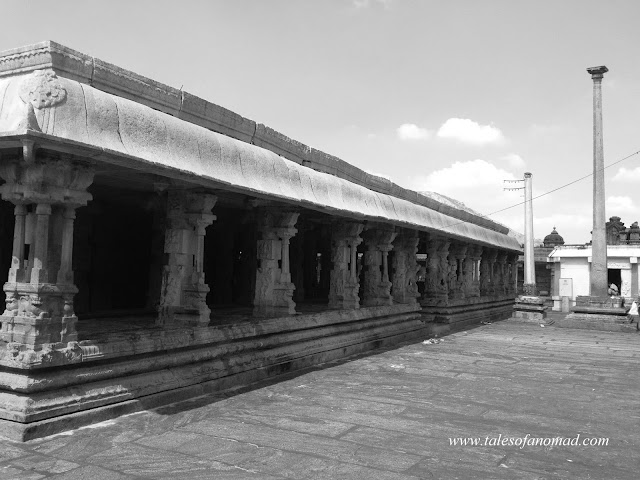 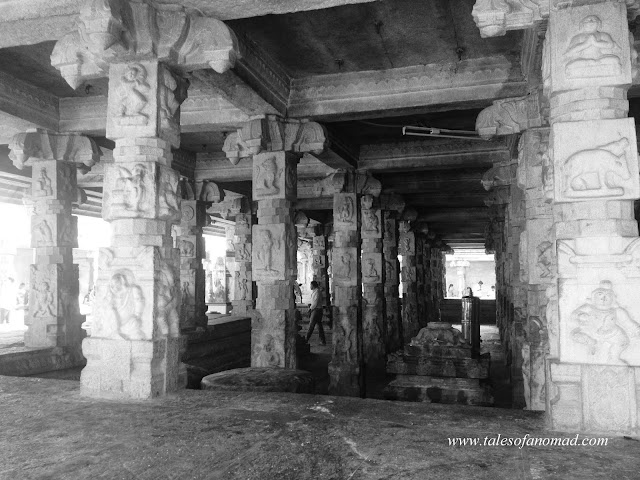 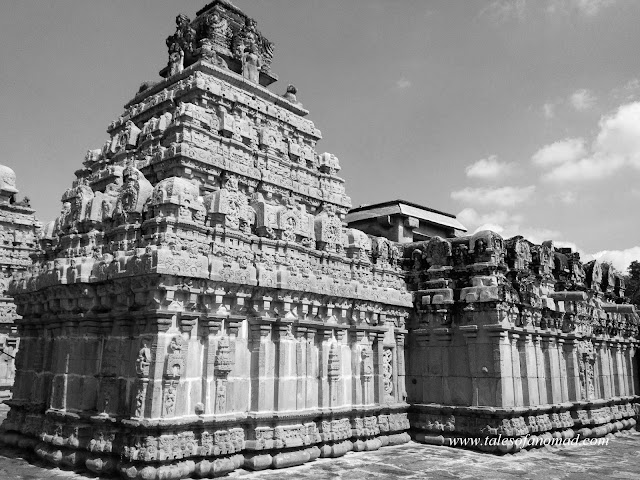 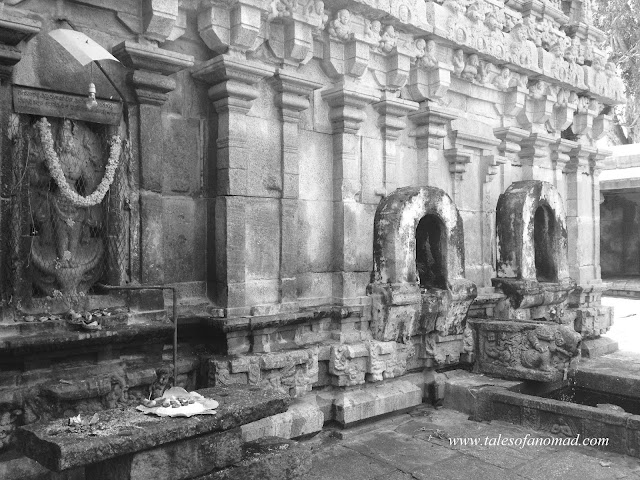 Pilgrims were in a rush, scurrying past me. With offerings closely held, they were neither keen on the art work nor the pillars. All that they wanted was to enter the inner sanctum to have a glimpse of the well sculptured shrine, not to admire the creation but to cry out for blessings. I did not enter the inner sanctum, nor did I ask for blessings. All that I did was to gaze in admiration at the skill work of the innumerable creative unknown craftsmen. 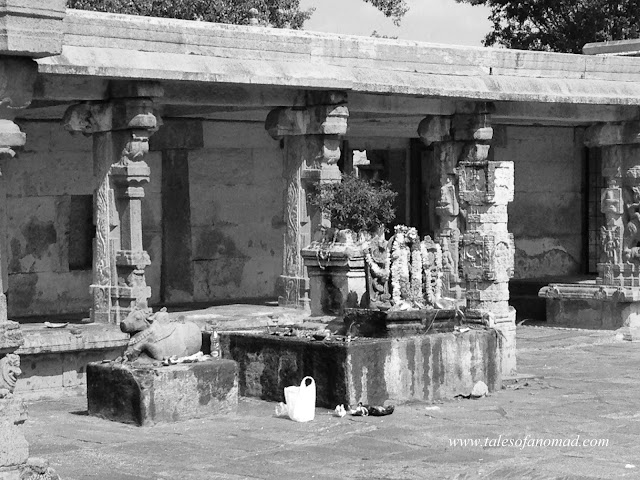 The corridor further lead to the adjoining mantapas (halls) such as Vasanta Mantapa and Tulabara mantapa. Hardly a crowd there, but the huge stepped tank, Shringi Theertha with cloister walls enclosing it had children splashing waters and selfie lovers in various poses and angles. I walked along the long steps and the farther I went, feebler became the laughter of the children. I wish I could sit at the farthest corner of the tank in tranquility, staring at the beautiful steps in oblivion. Peaceful. There are claims that South Pennar river flows out from this tank. 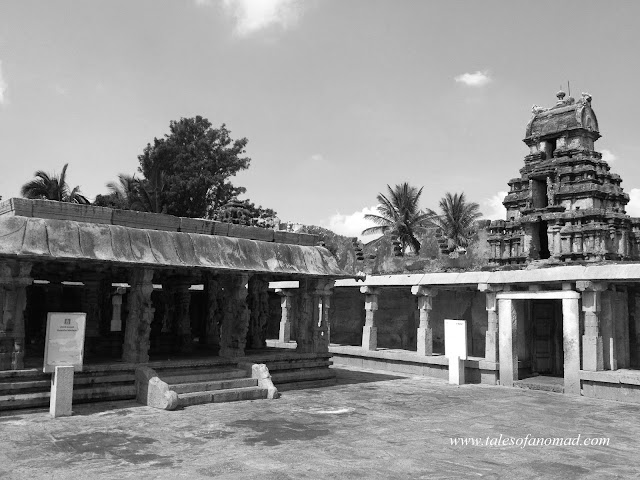 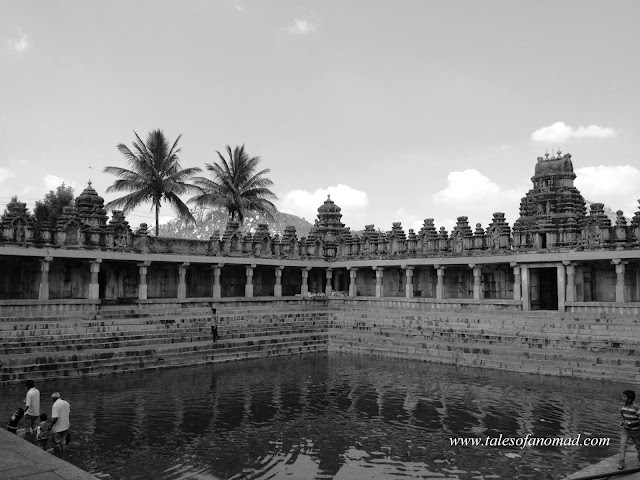 I walked out back to the corridor to see the bride still smiling for poses against the beautiful backgrounds. Wish more marriages were held amidst such gorgeous and historical surroundings. Adorned with intricate carvings, chiseled pillars and numerous sculptures, Bhoganandeeshwara temple is definitely an architecture lover's paradise. The best aspect is that it is very well maintained and has a charm that takes you down the history lanes.


Getting there- The temple is 55 km from Bangalore. Take the NH-7 from Bangalore and the detour to Nandi hills. At the base of the hills where the road forks, take right. Left leads to Nandi Hills. Public transportation is infrequent.

Food and Accommodation- There are a few eateries and shops just outside the temple. For proper hotels and lodging, Nandi hills is a better option.