My earlier visits (see here) to  the coffee country of Coorg, have always been flagged off with a visit to the  Tibetan monastery at Bylakuppe and has invariably culminated with the sunset view at Raja seat. How ever this time after visiting the monastery and Abbey falls, we (5 bikers) decided to take the route less trodden. A cold and misty morning ride on the Bangalore- Mysore highway took us past the lovely towns of Maddur (we had a lovely breakfast here), Srirangapatana, Hunsur and then further into the coffee hills of Coorg.The roads had drastic changes from my previous visit and the smooth tarmac made the ride through the winding bends a mind-blowing experience. 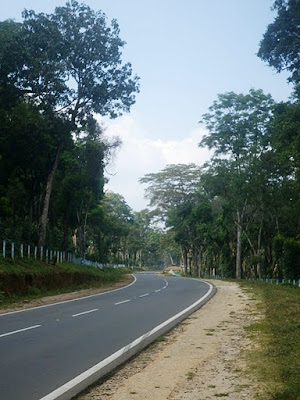 The first big stoppage during  the ride came at Bylakkuppe, where we took a detour to visit the Namdroling Monastery. As always it was crowded and thronged by tourists and school children. Bylakuppe is home to one of the largest Tibetan Buddhist settlements in India and houses this beautiful Namdroling Monastery (Golden temple) that follows Nyingmapa which is a lineage of Tibetan Buddhism. It is home to thousands of monks and nuns who go about their daily routine wrapped in red wardrobes. It was indeed a beautiful sight to see hundreds of monks of all ages briskly moving past the vsisitors. A massive statue of Padmasambhava resides inside the sanctum. Even though it was crowded inside it felt so calm and quiet and I enjoyed my moments of solitude. Bylakuppe also has many other monasteries and nunneries near to this Golden temple.

With hungry tummies growling we rode our way through the hills to Abbey falls. After gobbling down a few plates of bread and omelets we walked down to Abbey falls. Situated inside a coffee plantation, this beautiful falls was filled with tourists. Choosing a weekend for your travels do turn out to be bad selections. The bridge from where one can see the falls was crowded and I was quite apprehensive about reaching the other end. With the sun setting, we left Abbey falls and headed to Madikeri in search of a home stay.

The home stay was located a couple of kilometers from Madikeri town and the sunset view from there was a stunner. After a sumptuous dinner at East End restaurant in Madikeri we retreated to our home stay. We had a late night bonfire and then it was time to snore.After a late brunch the next day, we began our winding ride from Madikeri to Virajpet crossing the small towns of Napoklu, Kakkabe and Kabinakkad. The roads were pathetic with potholes galore. The ride, however was absolutely blissful with the aroma of coffee and pepper throughout. The roads wound past the coffee and pepper plantations deeper into the heart of Coorg district. The fascinating views of the rolling hills, wide meadows, trickling streams and the yellow-green paddy fields made me stop quite a few times to capture the real essence of Coorg. The potholes made my ride a slow one and a few times during my ride I did feel happy about their existence. Coffee and pepper were omnipresent and this did add aromatic flavours to the ride across the coffee country. 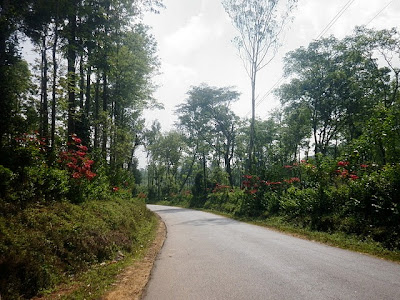 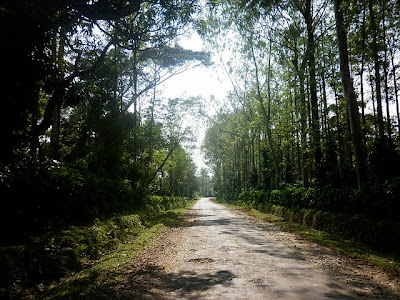 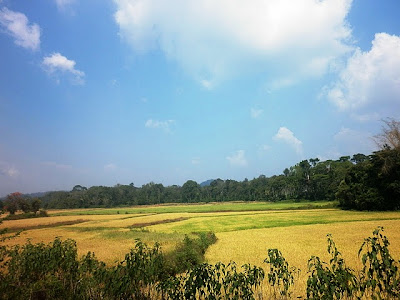 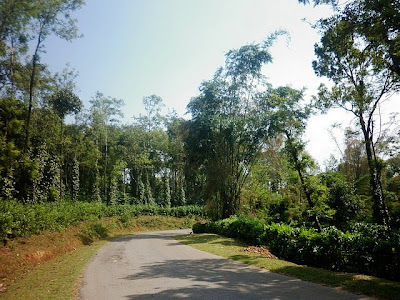 At Kakkabe we stopped by to visit the Nalknad palace. Built in the 18th century, this palace was the refuge of the last Kodava king, Chikka Veerarajendra. The palace did not look palatial and was quite similar to one of those old ancestral houses in Kerala. A security-cum-guide led me into the inner rooms and alleys which were completely dark. However the steep steps, secret rooms  and narrow doorways made the walk interesting. 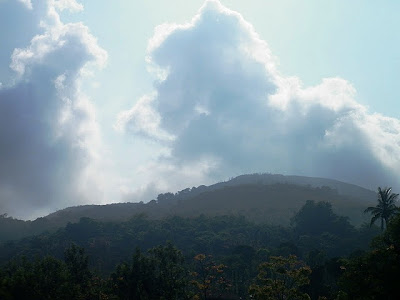 The palace does boast of a picturesque background with the hills forming a beautiful landscape. One of the trekking routes to Tadiyandamol also starts from near the palace. With Tadiyandamol trek not in our itinerary, we headed to a nearby resort for a late lunch. The resort which was situated amidst coffee planations had beautiful vistas all over. As the lunch took time to be prepared, we decided to explore the coffee planations and trekked through the same for some distance. After a trek of 10 minutes we were staring at a magnificent waterfalls inside the coffee plantation. Even though the quantity of water was less, the falls looked beautiful. We climbed up a few boulders to have a better view and then relaxed there gawking at the natural beauty for a few minutes. 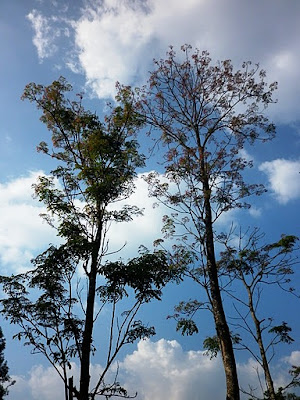 After a tasty lunch at the resort we further traversed the coffee hills and headed towards Virajpet. En route we took a detour and visited the Chingara waterfalls. The falls which has water gushing from all over during the monsoon did not have the same intensity due to lack of water. After a small photography session we had a quick ride to Virajpet.

With the shadows becoming longer, the potholes becoming bigger and the plantations becoming wider, the ride through the rustic side of Coorg was exhilarating. As we touched Virajpet the orange sun was blissfully setting behind the enchanting coffee and pepper hills. The ride from Virajpet to Hunsur was quite an adventurous one. 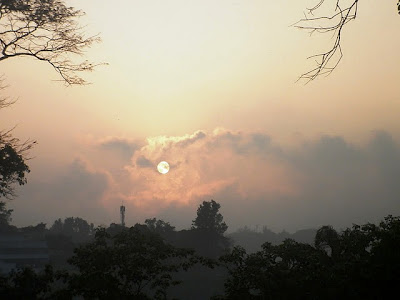 With flashing head lights and pathetic roads, the ride through the buffer zone of Nagarhole national park was exciting, if not fun. Even in the darkness we could make out that the plantations had given way to forests and the roads had worsened to dirt tracks in certain places. The best part of the ride was when we spotted a  wild tusker standing  besides the road. His massive white tusks shone in the pitch darkness when our headlights flashed. He was least perturbed and happily stood there as our bikes passed by. That was indeed the most exciting part of the ride. A kilometer ahead we spotted another one, this time a female. I seriously wished, I could capture them on my camera. Had I even tried to do it, I do not think I would have been alive to write about this wonderful motorbike expedition into the Mocha hills of Coorg. :)

Crossing Hunsur and Srirangapatana, we stopped at Maddur for a late dinner and then sped fast to reach Bengaluru streets well past midnight.

Coorg does offer lots of options for the traveller and tourist alike. With lots more places to see and a few hills to trek am sure my fourth visit to the coffee country is not far off.