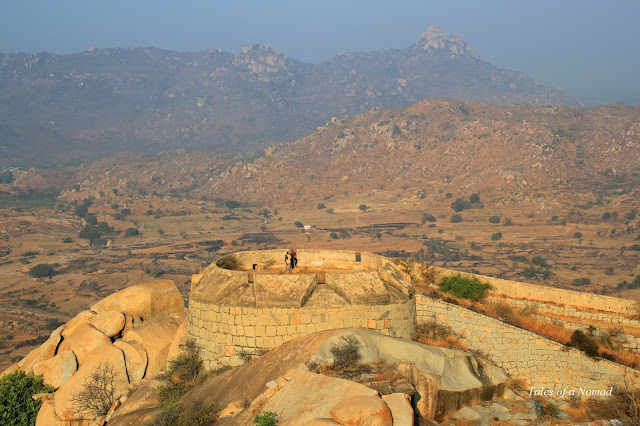 It was Byresagara lake that showed up first as we manoeuvered our way along the narrow village road. The lake was placid, had a few storks, rising mist and a lone fisherman, which made the frame absolutely breathtaking. The towering Gudibande fort atop the hillock loomed in front of us as we drove towards the village that was waking up. It was a race between the sun and us the moment we drove out of Bengaluru in the wee hours of a Sunday morning. By the time we took a detour on to the village road, the sun was had already spread its hues over the horizon. 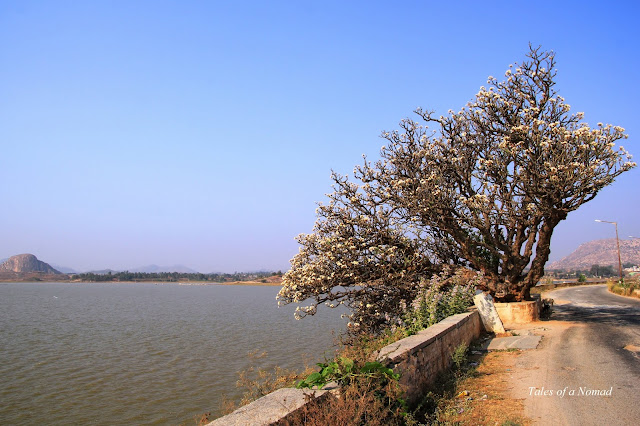 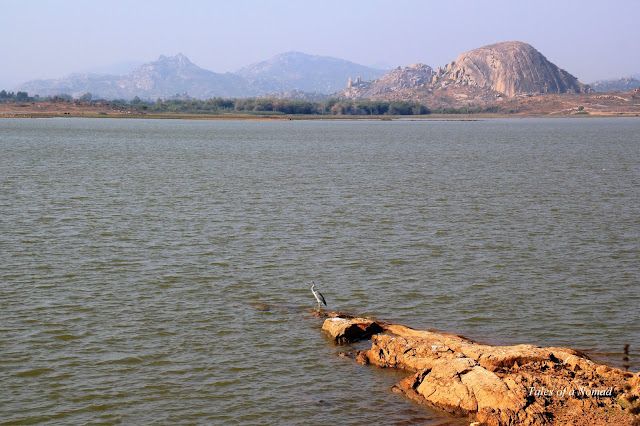 Gudibande fort located in Chikballapur district, north of Bengaluru was built in the 17th century by a local chieftain Byre Gowda. Byrasagara lake at the base too was built by him, who was considered a robin hood by the locals as he often robbed the rich and helped the poor. The fort is considered to be built as a replica of Madhugiri fort.

It is an easy climb all the way with a line of steps initially which turns into narrow rock chiseled pathways as you go higher. The hillock is strewn with boulders and some look precariously placed with a pathway beneath. The views from the vantage points enroute are an absolute delight with panoramic vistas of the surrounding areas. The rock cut slabs which act as steps at many places make sure that the climb is adventurous as well. A large part of the climb is a gradual ascent, with some short steep stretches. 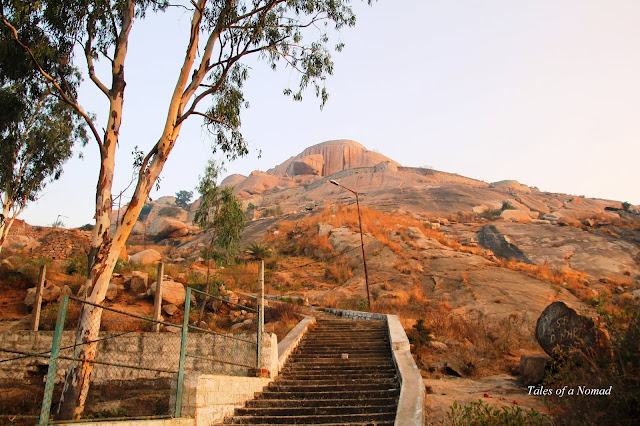 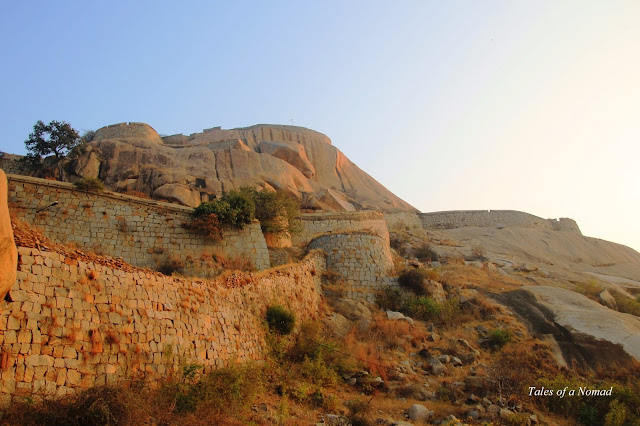 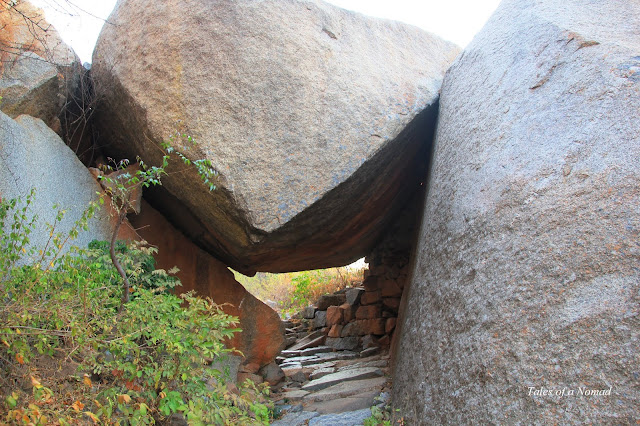 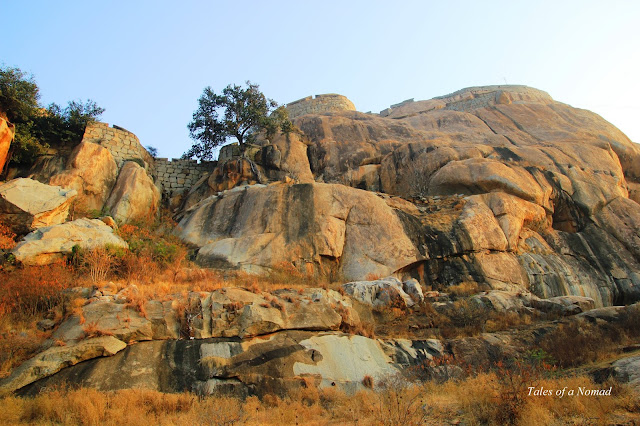 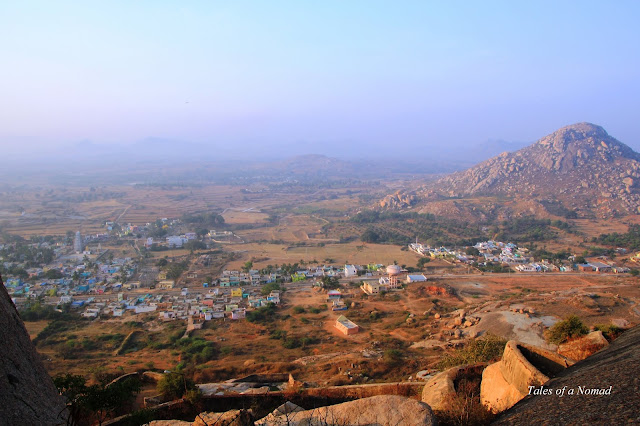 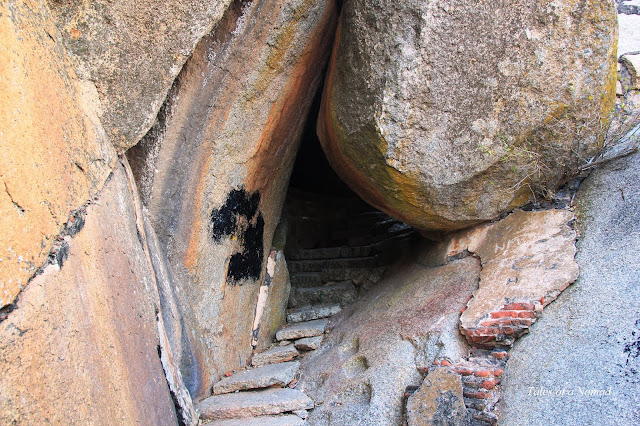 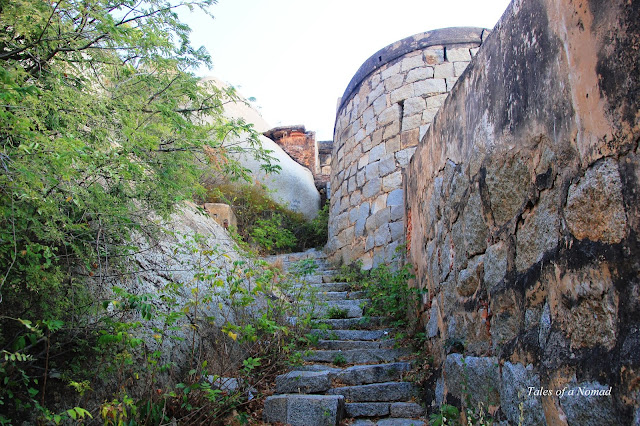 The fort has seven levels with fortifications, ruined structures, small shrines, entrance gates with carvings, many bastions, and a rocky terrain throughout. Most of the structures are in a dilapidated state with overgrown bushes. The fort also has a few escape routes and rainwater harvesting ponds that you cross on the way up. Dodging past the large boulders, once you reach the top, the views are spectacular. Distant boulder strewn hillocks, miniature houses, Byrasagara lake and the barren brown landscape are an eye soother. Atop the hillock, there is a temple dedicated to Shiva. Though the temple isn’t attractive enough, carvings on the lamp post in the front are intricate and beautiful. 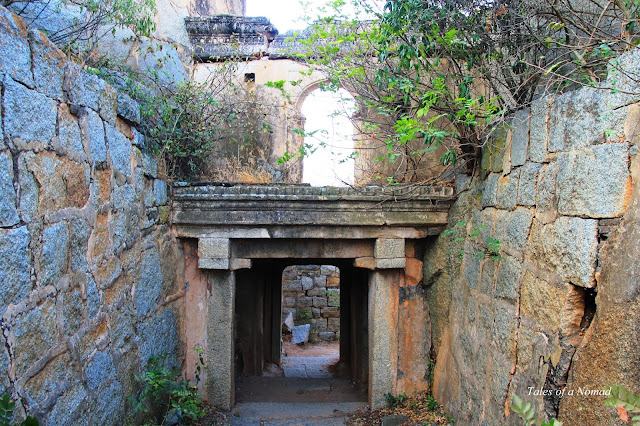 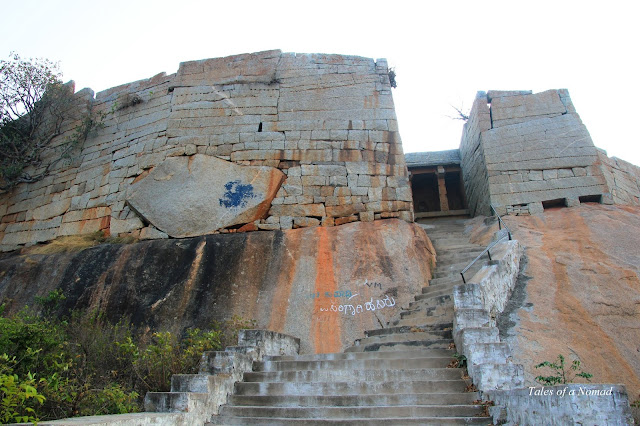 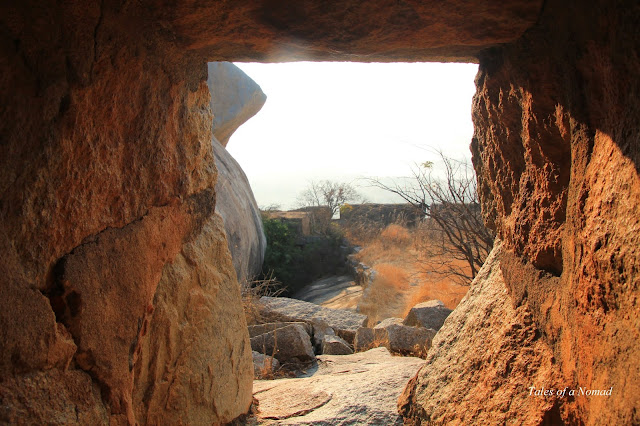 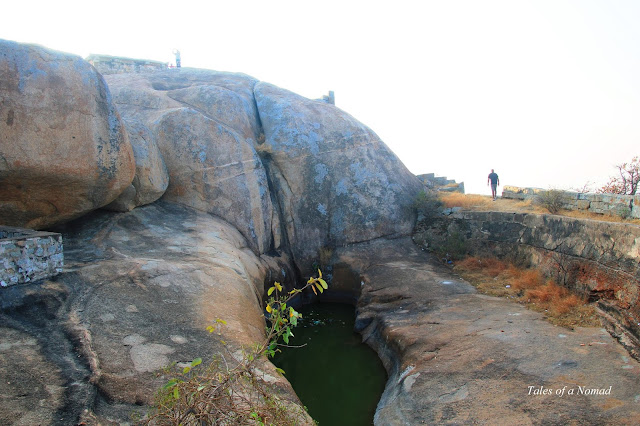 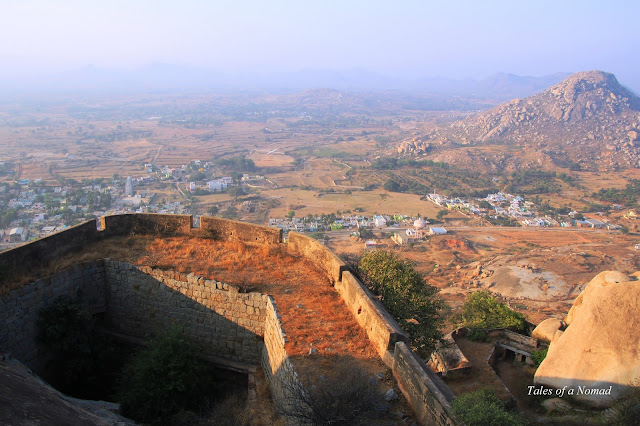 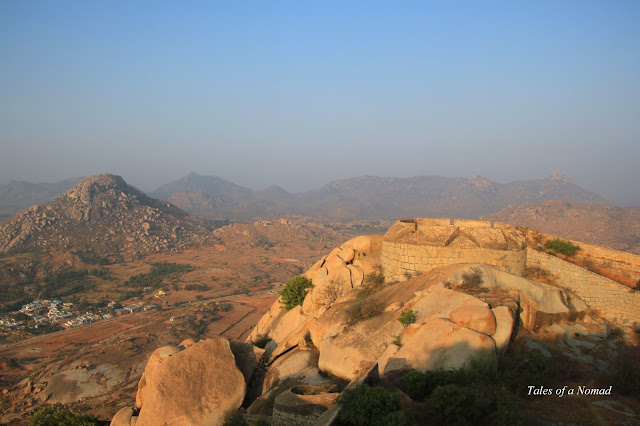 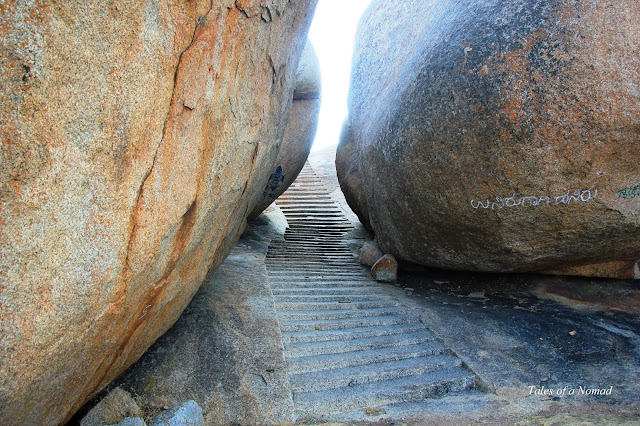 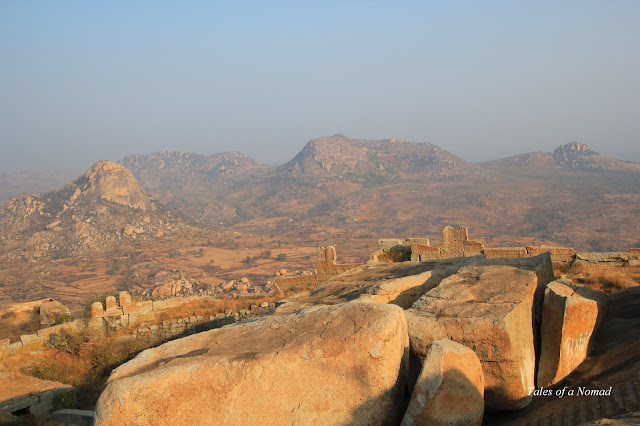 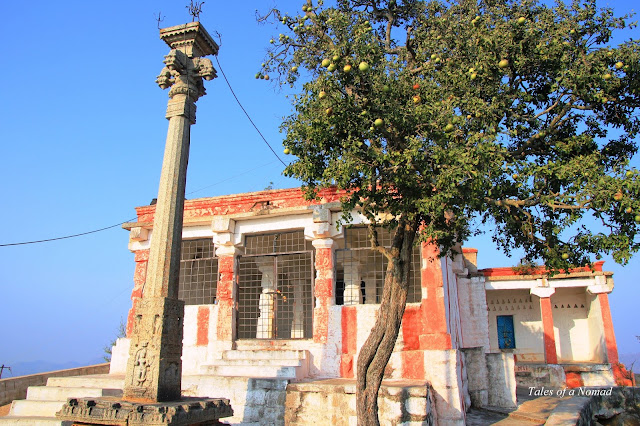 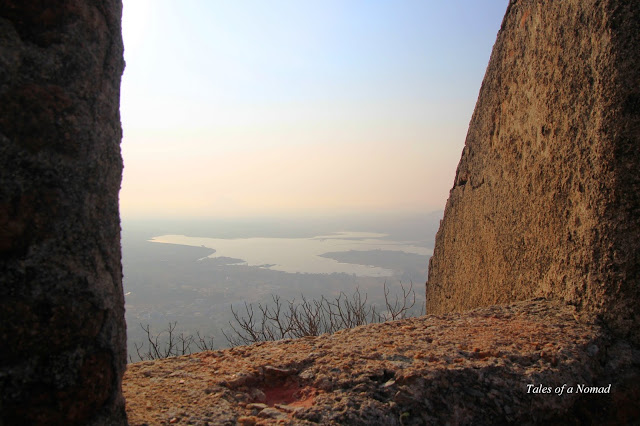 It is quite windy at the top and be prepared to face it once you reach the summit. Start as early as possible to avoid the harsh sun. While the climb took us less than an hour with multiple stops, we reached the base in half an hour. Gudibande fort is an ideal place for people who are new to treks and those who love landscape photography. It is still not so popular on the tourist’s map, and that’s another reason to visit this fort.

How to Reach Gudibande fort:

Gudibande is 95 kms from Bengaluru. Take NH 44 and take a left at Perasandra to reach Gudibande fort.
Posted by R Niranjan Das at 8:39 AM