Madurai- The Heart of Tamil Nadu 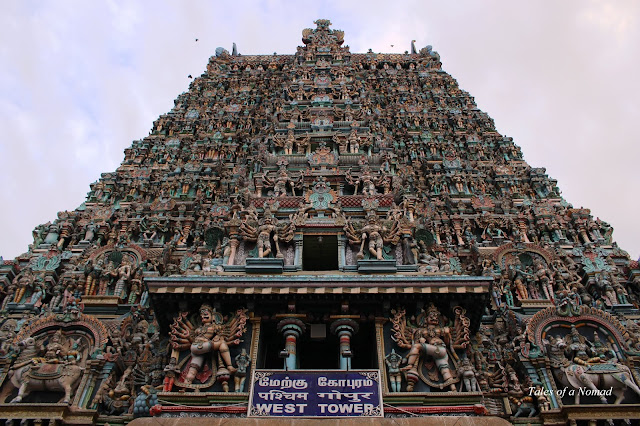 During my sojourn at Madurai, every day apparently started with a visit to the magnificent Meenakshi temple and ended eventually at the same place. It wasn’t just about the temple, but also its surroundings and liveliness of the streets. A stroll through its circumambulatory streets offered a significant insight into the life around the temple, which supposedly hasn’t changed much since the temple gained prominence during the rule of Pandyas. Lined with shops selling a plethora of items from fabrics to utensils to temple paraphernalia to artefacts, there is no end to the amount of glee that a shopper can feel. The hustling crowd and the tall colourful gopurams further accentuates the charm of this place. Though the city has grown over the years, Madurai still exudes the charm of yesteryears and is very rightly crowned the cultural capital of Tamil Nadu. 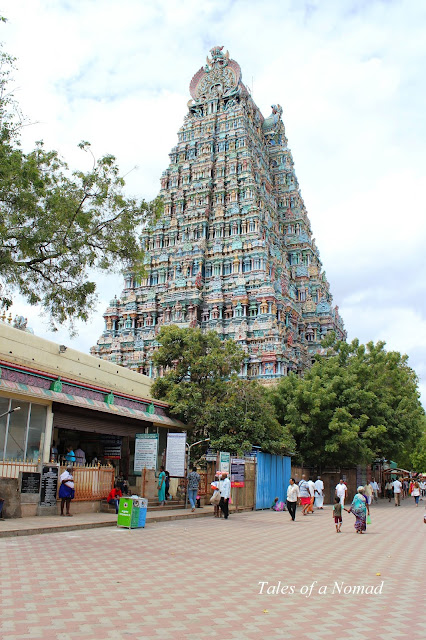 The capital of Pandya dynasty between 7th and 13th centuries, Madurai beside the river Vaigai is one of the oldest cities in the country. During the times of Pandyas, Madurai is said to have had trade links with China and Rome which resulted in the growth of the city. The city was also ruled by the Nayak dynasty during 16th and 17th centuries. The city further expanded as the Meenakshi temple gained popularity and settlements grew around it. It is also believed that Tamil Sangams (conference of writers and poets during the olden times) were held here. The city is also known for its celebrations and festivals such as Jalli Kattu in January and Chithirai in April. All these make Madurai the most popular temple town and the heart of Tamil Nadu.

Meenakshi Amman temple also referred as Meenakshi Sundareshwarar temple is the cynosure of all eyes who visits Madurai. Built by the Pandya rulers in 7th century and then added on by the later kings, Meenakshi temple is one of the prominent temples in the country. The colourful and intimidating gopurams of the temple can be seen from a long distance. The surrounding tall walls act like a fort with numerous stalls and shops selling myriad things lined up outside it. It is a delight to walk through the streets outside the walls to have a glimpse of the life surrounding the temple. Dedicated to Parvati who is worshipped in the form of Meenakshi, the temple also has a huge shrine of Sundareshwarar, a form of Shiva. There are also other shrines of Subrahmanya and Vinayagar. Apart from the deities, the temple is also known for its marvelous architecture, sculptures and carvings which are present across. The four rajagopurams (main entrance gates) are adorned with sculptures of various figurines and gods from mythology. The north entrance has paintings on its ceilings, elaborate carvings on its façade and has a line of well carved pillars.  Apart from these gopurams there are ten more towers within the temple premise. 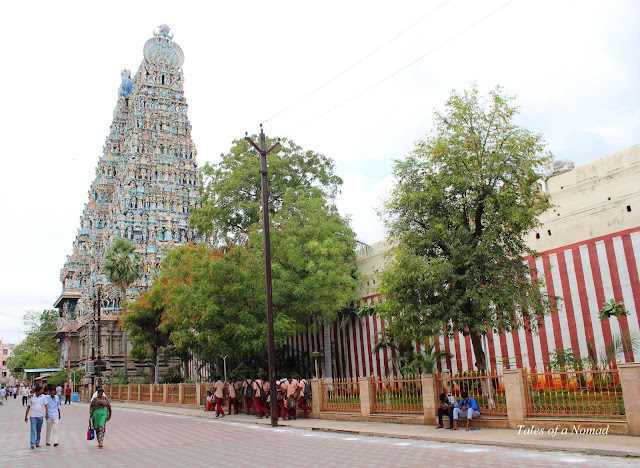 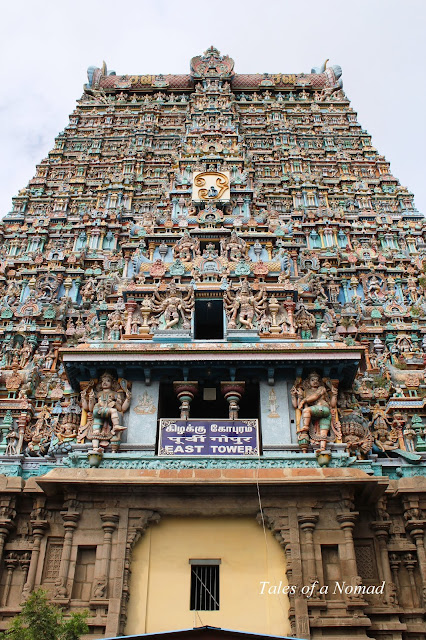 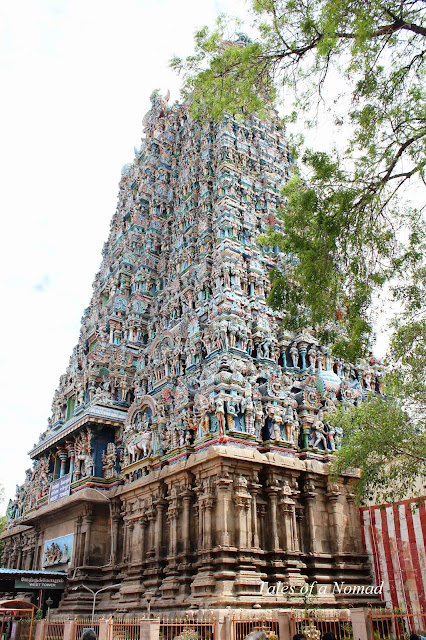 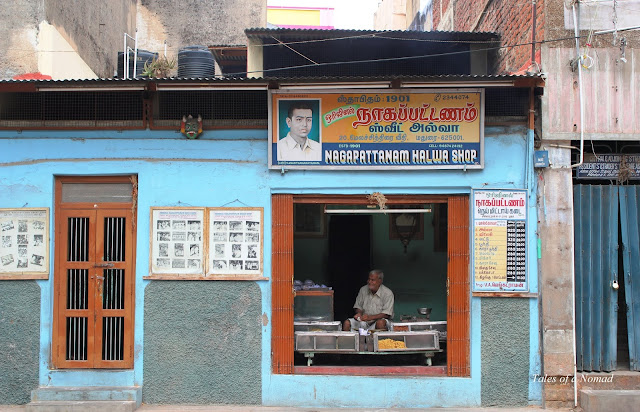 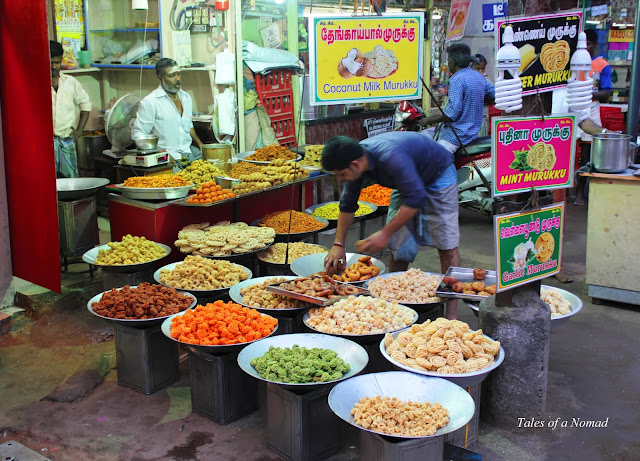 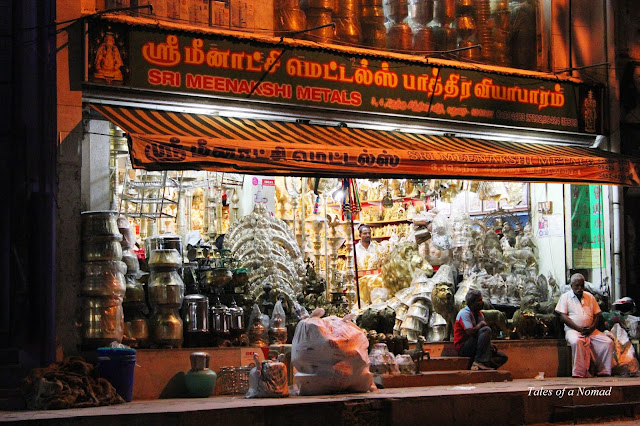 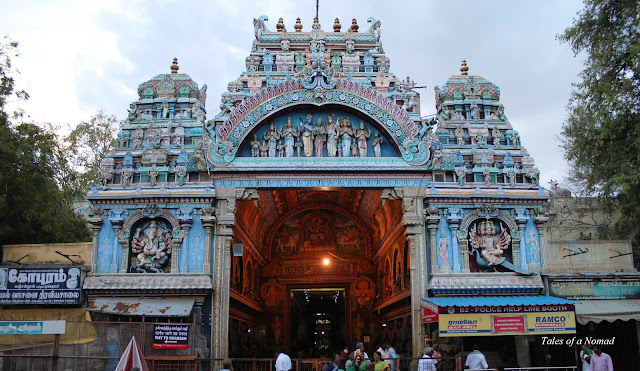 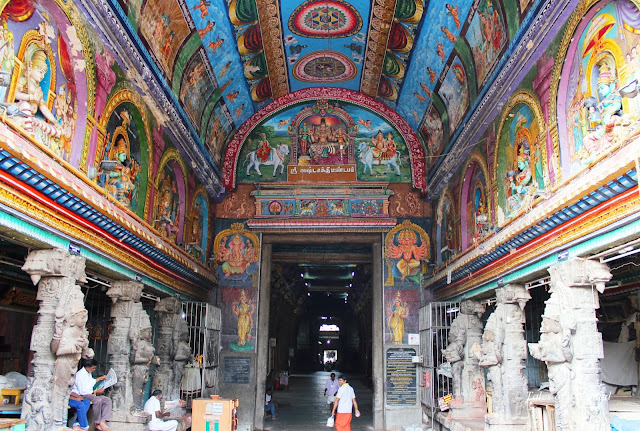 While the smaller gopurams further lead to the inner sanctum, the main shrines of Meenakshi Amman and Sundareshwarar have gold plated towers above them. At the entrance of the Sundareshwarar shrine are stunning sculptures on pillars of various mythological characters. The temple has quite a number of mandapams (halls) which have beautiful art works in the form of sculpted pillars. Mudali Pillai mandapam, Oonjal mandapam, Kalyana Sannithi, Kambathadi mandapam are some of these with magnificent sculptures and art works. Aayiram Kal mandapam or Thousand Pillar hall is the most prominent hall here which has a thousand pillars and gorgeous sculptures adorning it. It also has a collection of artefacts from the bygone era and is now a museum. The large temple pond which is known as Pottramarai kulam is the other interesting attraction here. 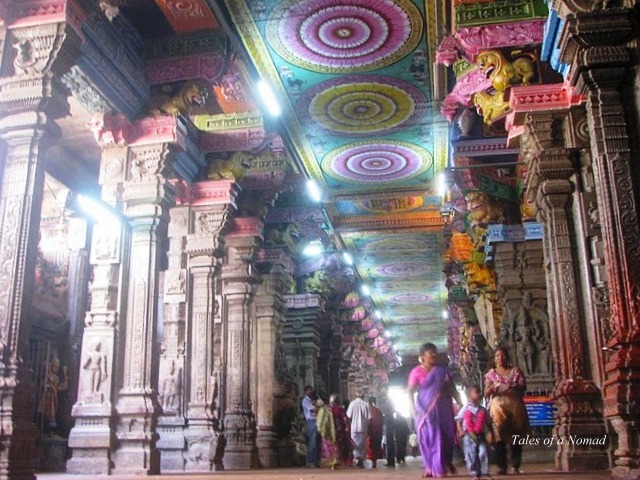 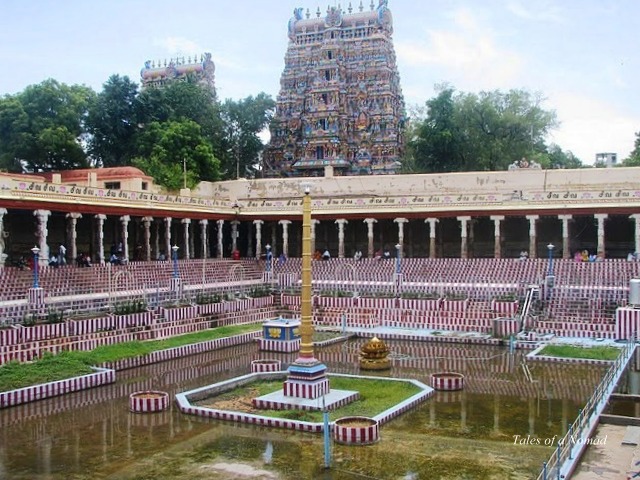 When the Nayaks ruled Madurai between 16th and 17th centuries, Thirumalai Nayak built the grand Thirumalai Nayak palace in 1636 CE. With a blend of both European and Dravidian architecture, the palace is known for its numerous pillars with beautiful arches atop them. The large courtyard in the centre is surrounded by pillared corridors. Above the arches and on the ceiling are gorgeous art works and carvings. The palace also houses a museum. 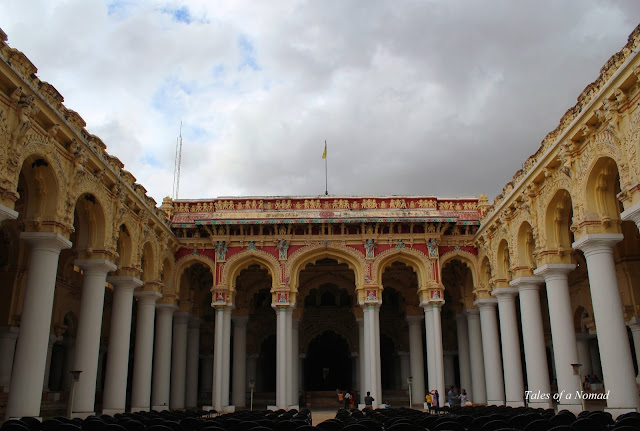 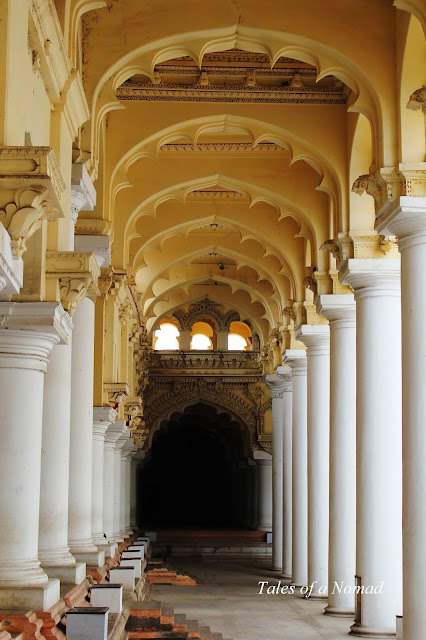 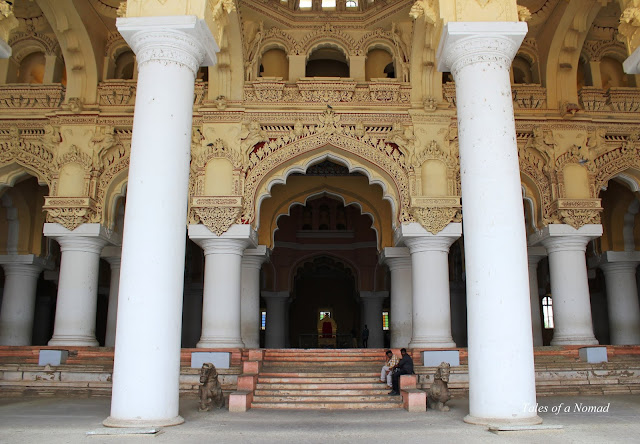 Gandhi Memorial museum is a large white coloured structure that houses the personal belongings of Mahatma Gandhi (including the blood stained cloth worn by him at the time of his assassination), photographs from the times of British rule, history and write ups regarding various events during the time of independence.  The museum was earlier the palace of Rani Mangammal during the rule of Nayaks. 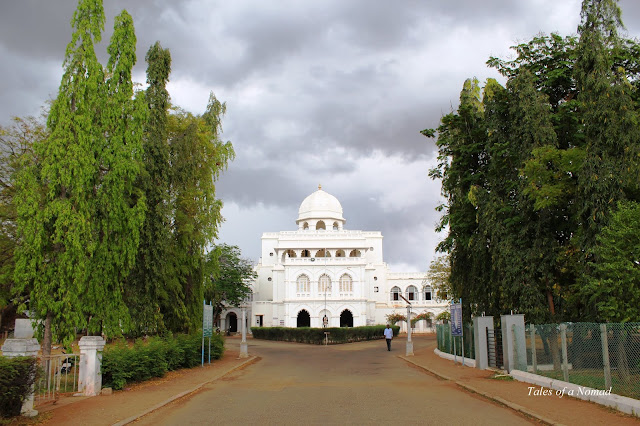 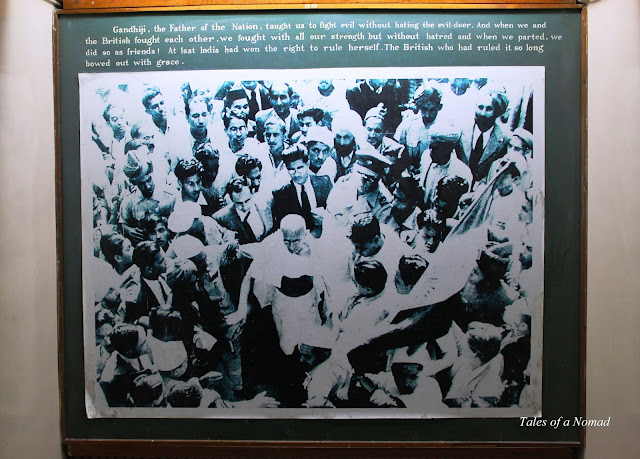 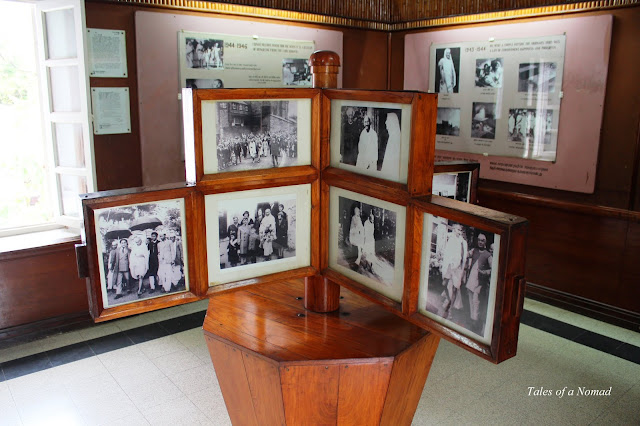 Mariamman Theppakulam is a large temple tank built in 1636 CE by Thirumalai Nayak. Believed to be the largest temple pond in Tamil Nadu, it has a Mariamman temple located at its centre. The float festival held here in January is special and the tank is is filled with water during that period. During the summer months, it usually becomes a playground for the local children. 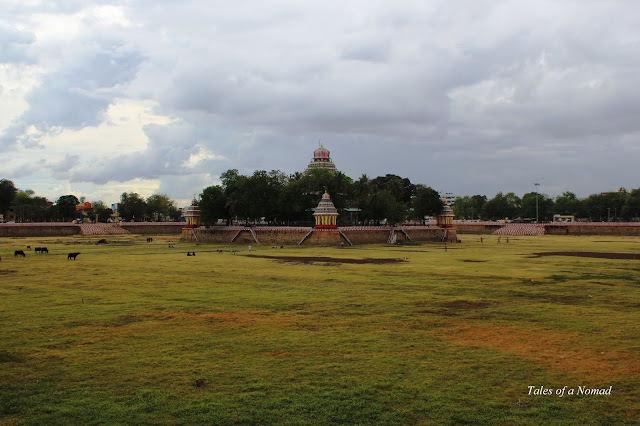 Situated in the outskirts of Madurai, Thirupparakundram temple is one of the popular temples near Madurai. It is one of the prominent temples dedicated to Subramanya and is also believed that he married Devayani here, making it a favourite temple for people to tie the knot. This ancient cave temple has wonderful carved pillars in its entrance hall and in the inner halls that lead to the sanctum sanctorum. There are also quite a few beautiful sculptures of various mythological characters across the halls. Though the cave temple has mentions since the Sangam age (3 CE), the present structure was built in the 8th century by Pandya kings and the further added by the Nayaks in 16th century. 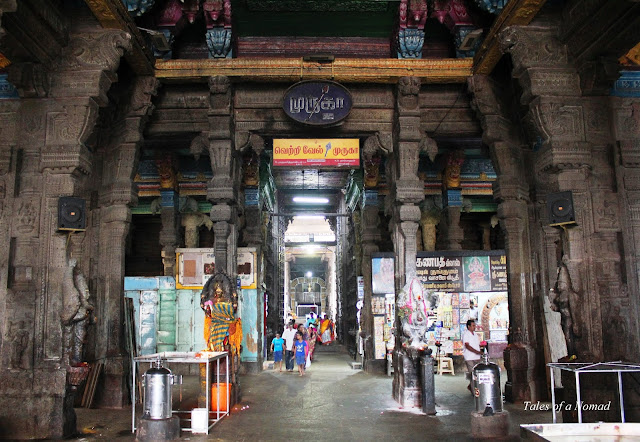 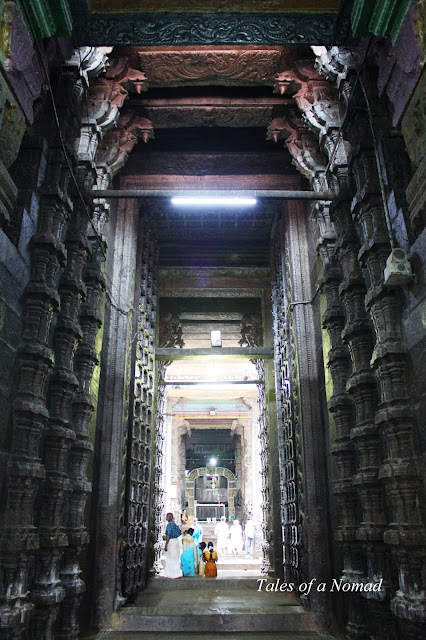 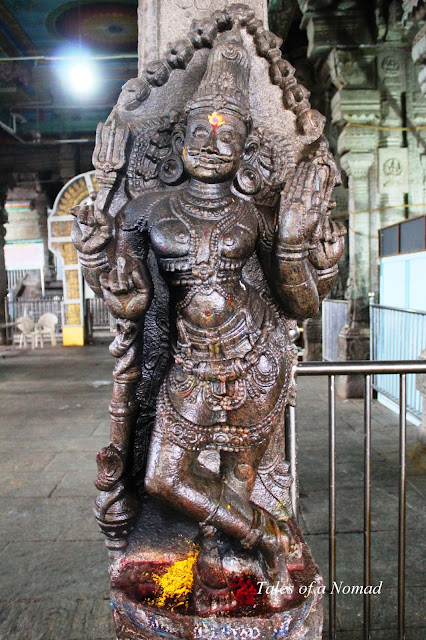 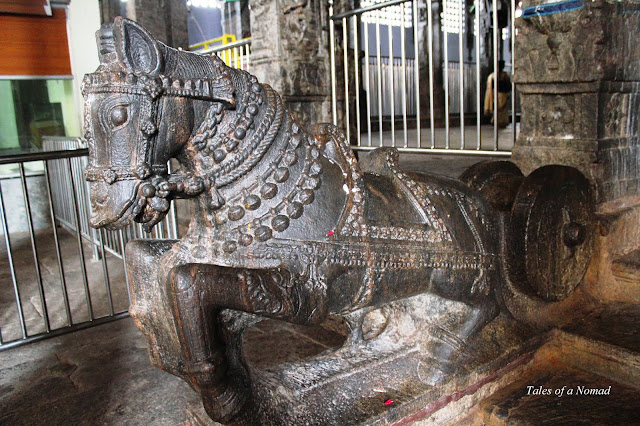 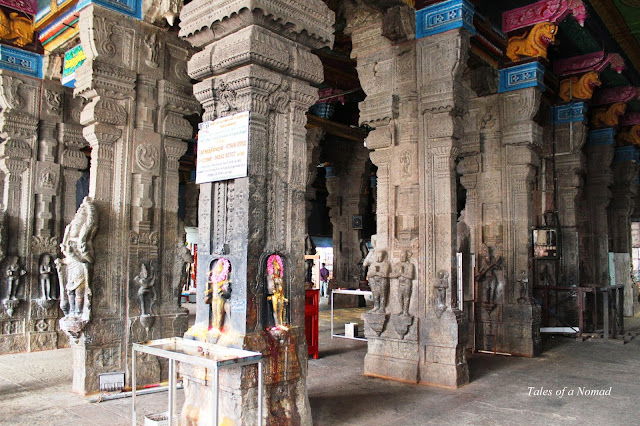 The road that circumambulates the large hillock inside which the Thiruparakundram temple is situated, leads to a couple of Jain shrines which have been present since 3 BC. The caves which are believed to have been homes to Jain monks have stone carvings and engravings inside them. 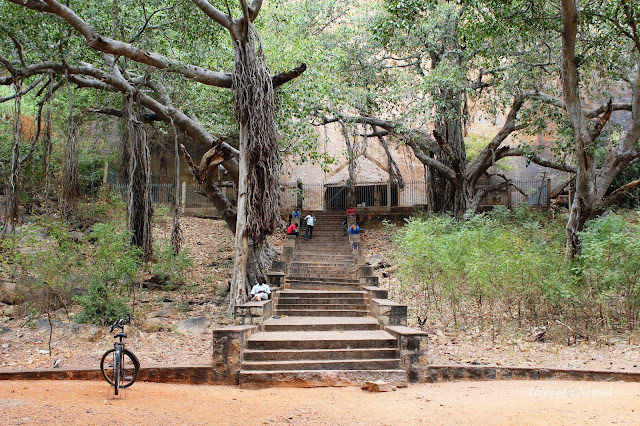 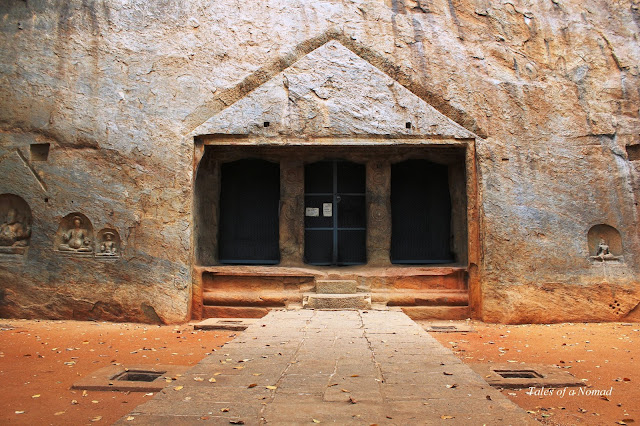 Keezhakuyilkudi located a few kilometers outside Madurai is home to another jain cave with carvings of Mahavira. The cave is located on Samnar hills which offer beautiful views of the setting sun. At the base of the hill is a Hindu temple with another one on top with a long flight of steps leading to it. 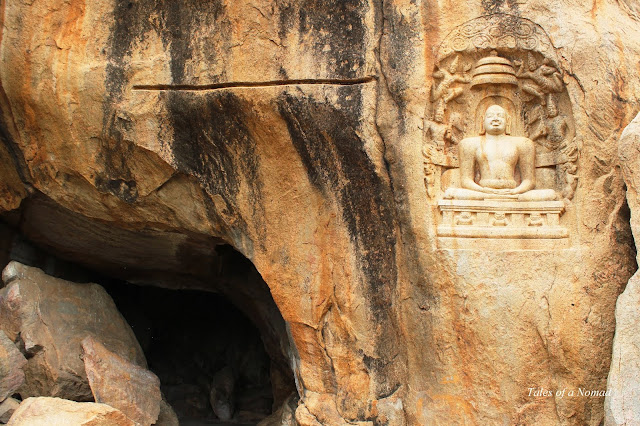 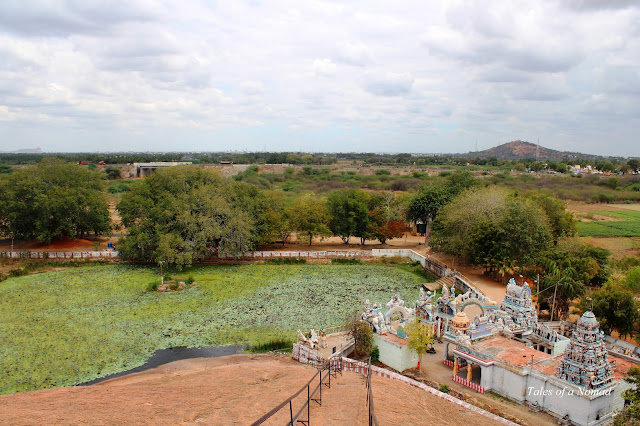 While in Madurai, two things one shouldn’t miss are Murugan’s Idli and Jigarthanda. Murugan’s Idli shop is a cult place and offers delicious spongy Idlis dipped in oil. Spread on a banana leaf with a chutneys and sambhar, these are sure to melt in your mouth. Jigarthanda is a thick drink made from ice cream, milk, cream and a lot more. It is quite popular across Madurai and is well recommended during summers to reduce body heat. Famous, a small outlet which has been offering Jigarthanda since 1977 is the best place to relish this. Both Murugan’s Idli and Famous are located near Meenakshi temple. 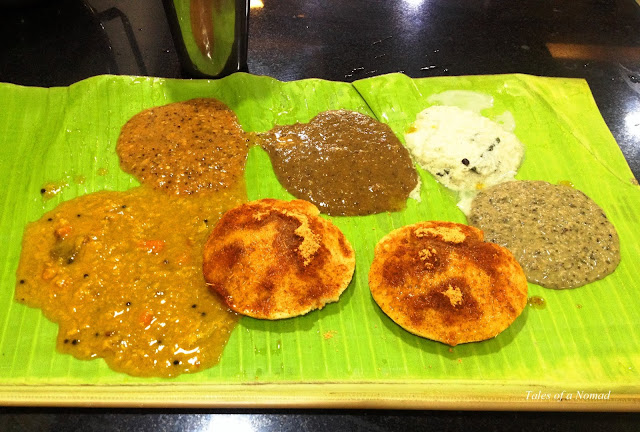 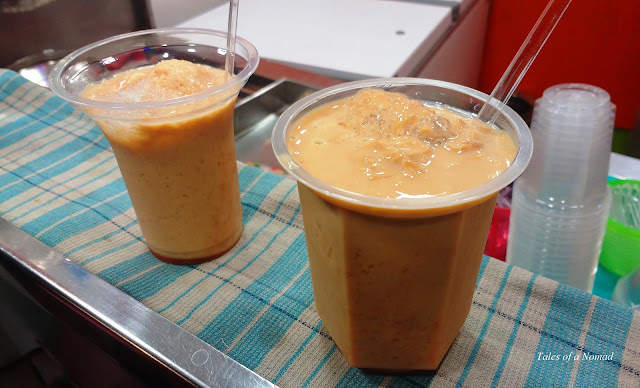 There are numerous eateries and restaurants across Madurai and around Meenakshi temple. While most of them are vegetarian restaurants, there are places which serve non- vegetarian food too. Murugan Idli shop is a must visit place for breakfast to devour some soft idlis. Being a large city, Madurai offers a wide range of options to stay from budget to luxury hotels. I stayed at The Lost Hostel which is well recommended.
Posted by R Niranjan Das at 9:56 AM