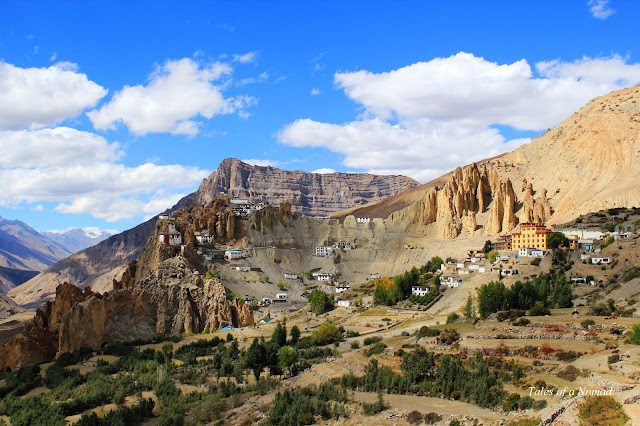 Apart from the landscapes which are breathtakingly surreal, what captivates Spiti are culture and monasteries of this spectacular land. Fed by the Spiti River and with innumerable barren mountains, the valley has numerous tiny villages perched on ridges with fluttering prayer flags and sporadic green patches. Highly influenced by the Tibetan way of life and sharing borders with Tibet, Spiti valley is home to some of the prominent and mystic Buddhist monasteries.  Kaza is the district headquarters and the major town from where one can explore these monasteries. The public transport is quite limited and one has to travel in own vehicles to reach most of the monasteries and places around it.

A steep detour from Shichilling coupled with gorgeous views of the confluence of Spiti and Pin rivers takes you to Dhankar monastery, and to the eerie rock formations with houses atop it. Dhankar has two monasteries and the new one is brightly painted with colourful interiors and numerous monks strolling around. However, Dhankar is known for its old monastery which follows Gelugpa sect of Buddhism. Located a short distance away and perched on weirdly shaped rocky formations, the monastery has cracks on its walls and seems precariously standing tall on the rocks. The tiny rooms inside with low rise roofs are dimly lit and have wall paintings. The views of the confluence of the rivers from the monastery are breathtaking. Further ahead of the monastery is Dhankar fort which is a nice vantage point. From the new monastery, a narrow trail leads up the hill to Dhankar lake which is 3 kms and 3 hours away.

Location: 29 Kms from Kaza and 8 Kms from Shichilling 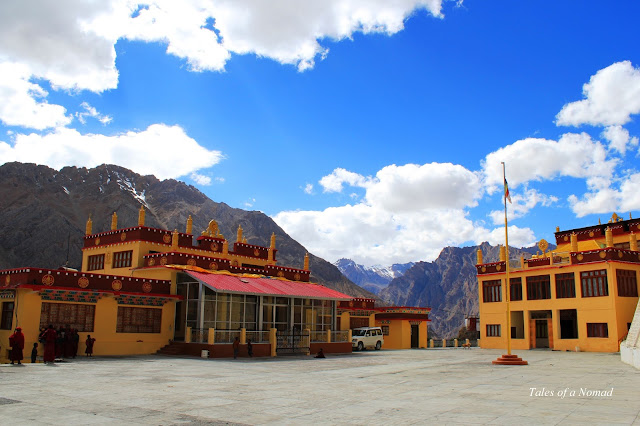 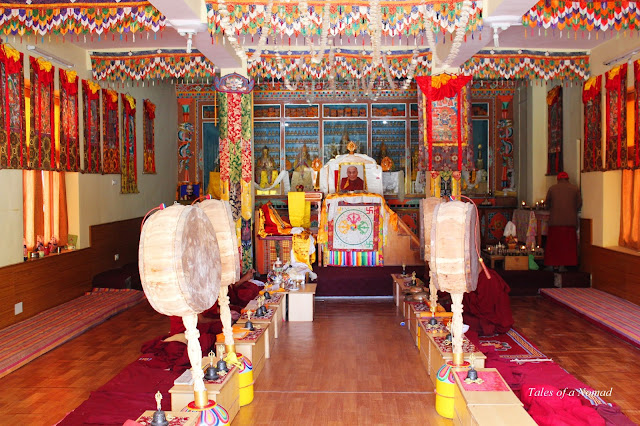 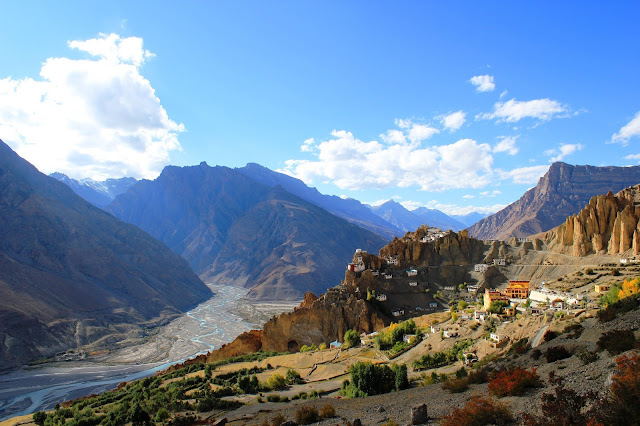 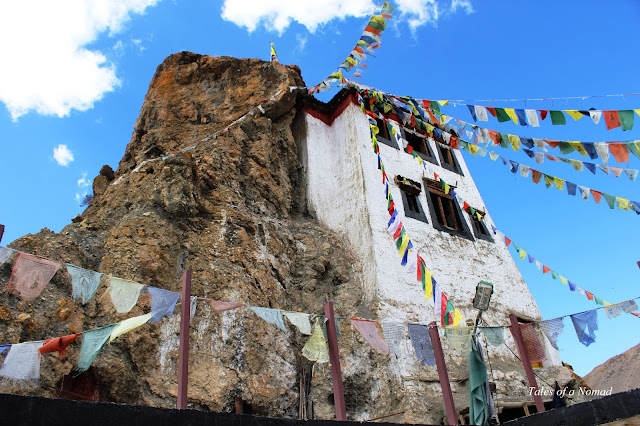 Located to the south of Kaza, Tabo is a small town and known for its temple complex which is believed to be the oldest continuously functional Buddhsit monastery constituting of many stupas and shrines. The new monastery is typical of the modern architecture and design with bright colours and prayer flags. The Kalachakra next to it has chortens and prayer flags. Behind this are the many old monasteries built entirely of mud and wood. Of these, the prominent one is Tsuglhakhang, the main temple which was built in late 10th century. Adorned with mural art on its walls, stucco clay sculptures and thangkas (Buddhist paintings), this ancient temple place evokes a sense of serenity and exquisiteness. The other monasteries were built between 15th and 17th centuries and they too have wonderful works of art on display. Tabo monastery is home to millennium old Tibetan monastic art and is often referred as the Ajanta of Himalayas. 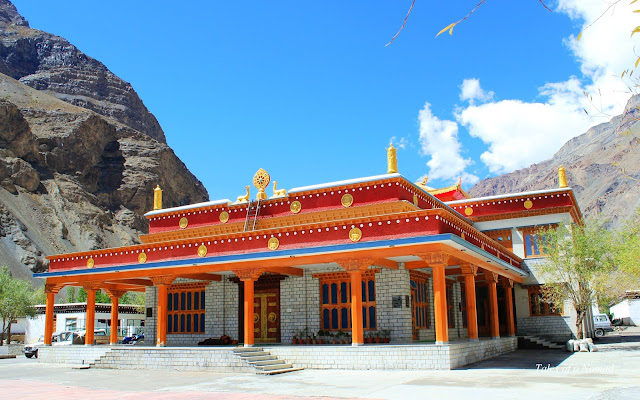 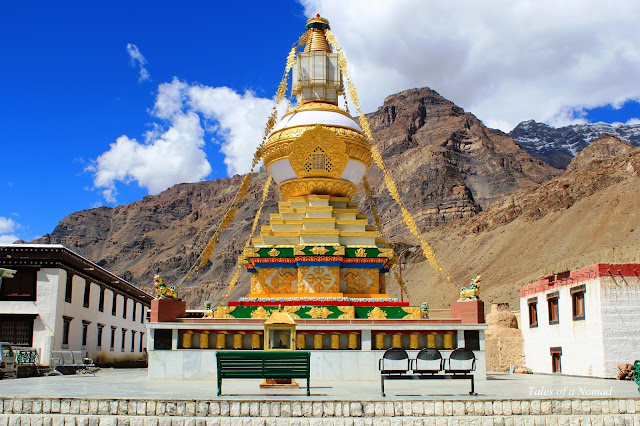 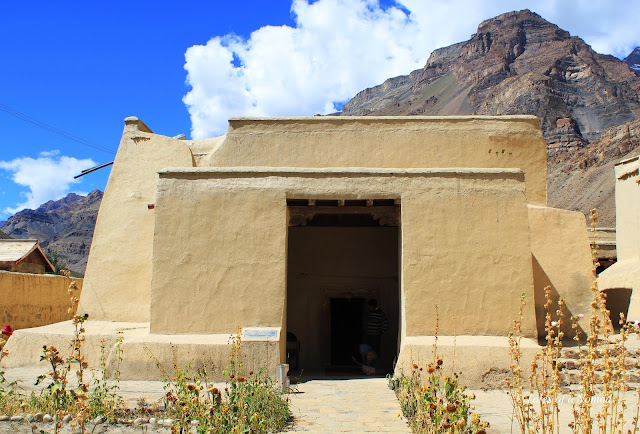 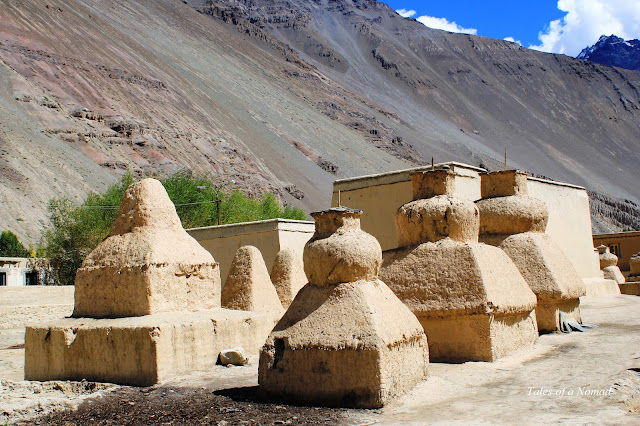 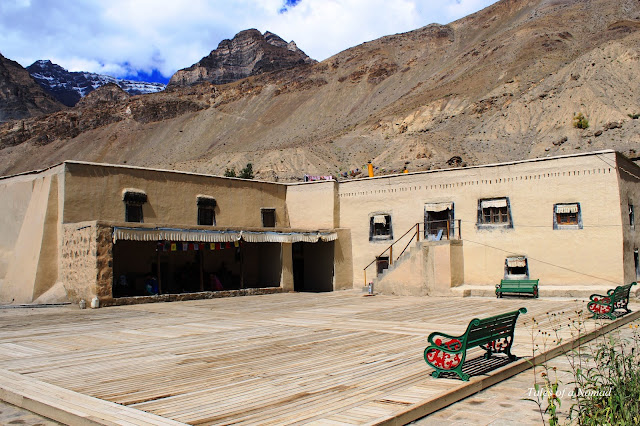 Winding roads through lovely barren landscapes of Lungti valley take you to the secluded Lhalung village located at the base of snow clad mountains. Lhalung monastery located near the village is a small one, but the inner sanctum has mural art and numerous stucco sculptures of Buddha, Tara, Maitreya and Padmavasambhava. The monastery is also referred as Serkhang (golden hall). 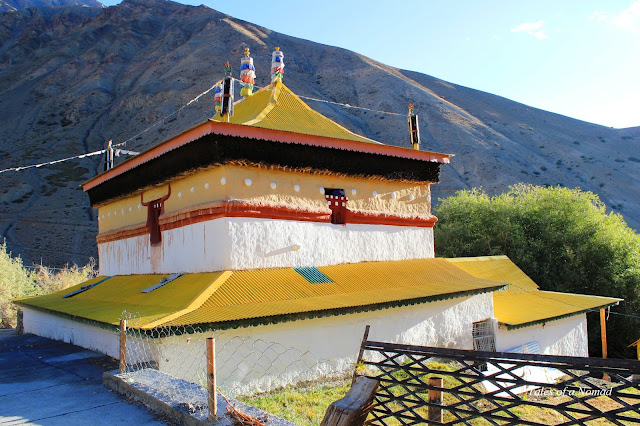 Perched atop a hill, Ki monastery is visible from a distance as you ride up to it. It is probably the most picturesquely situated monastery in Spiti with brown mountains and blue skies in the backdrop apart from overlooking the turquoise waters of Spiti river. At more than 13,500 feet, it is the highest monastery in Spiti and also the largest in the region. The 13th century monastery which follows Gelugpa sect of Buddhism houses a huge collection of thangkas (Buddhist paintings) and is home to 350 monks. The monastery has been constantly under restoration works as it was repeatedly attacked by Mongols, Dogra army, Sikhs and also because of natural disasters. 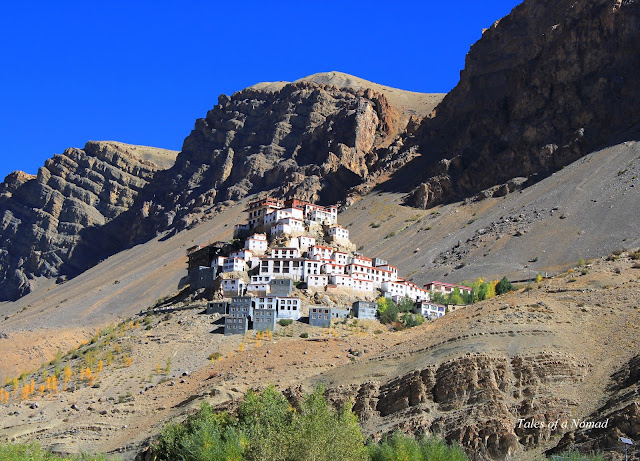 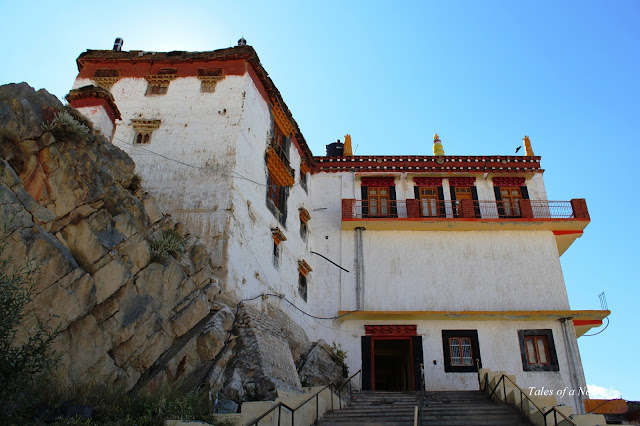 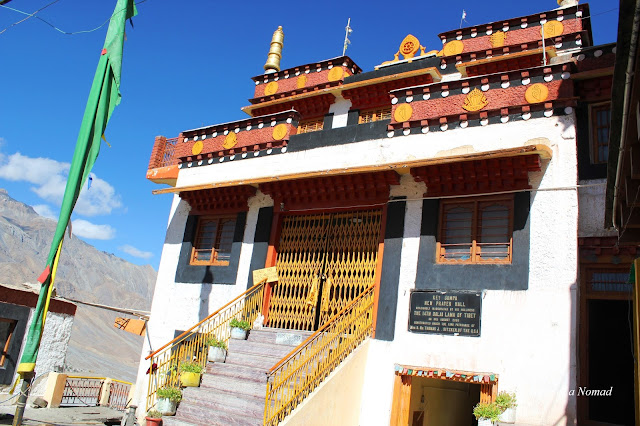 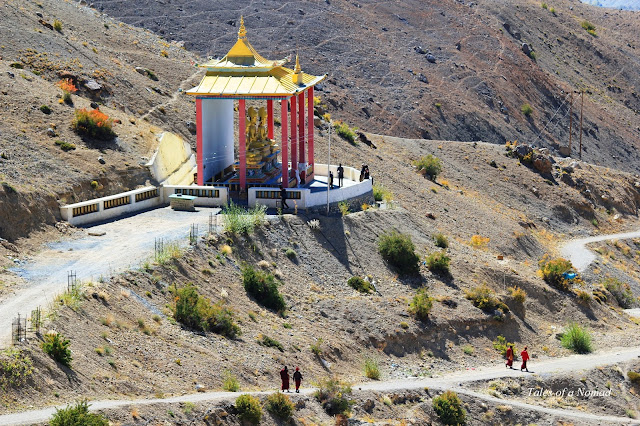 Located further ahead of Ki monastery, Kibber village (Kibber wildlife sanctuary) is a popular place to spot snow leopards during winter. The monastery here is fairly a small one (is under restoration and expansion presently) and has an ancient prayer hall which has colourful mural art on its walls. 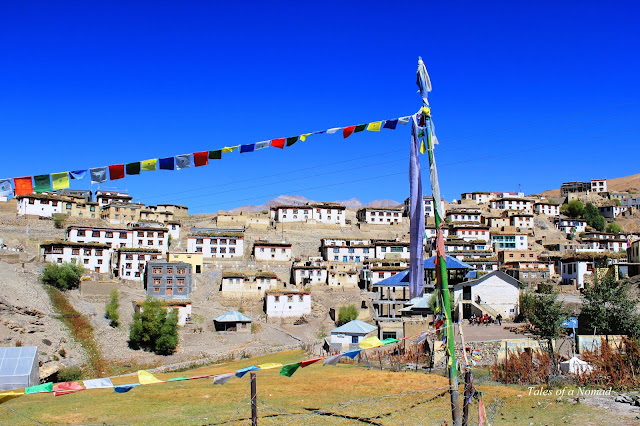 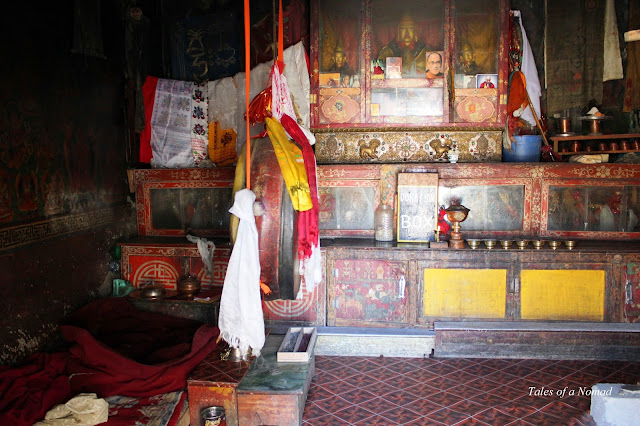 It’s a long meandering road to Langza, a tiny picturesque village lying at the base of snow clad mountains. Though a small one, the monastery is colourful with fluttering prayer flags. The other big attraction here is the huge colourful statue of Buddha facing the mountains. Langza village is also known to have a variety of marine fossils and is a popular night sky gazing site. 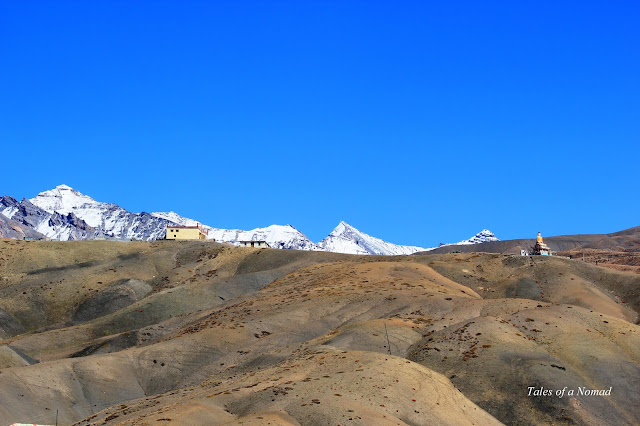 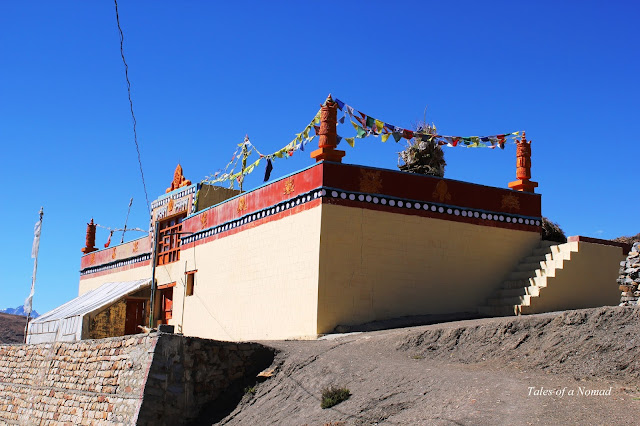 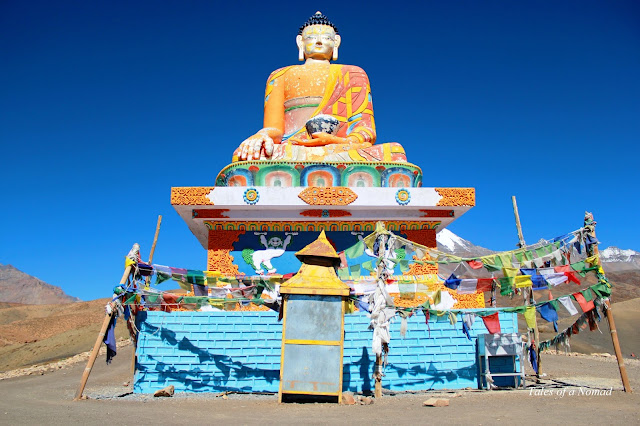 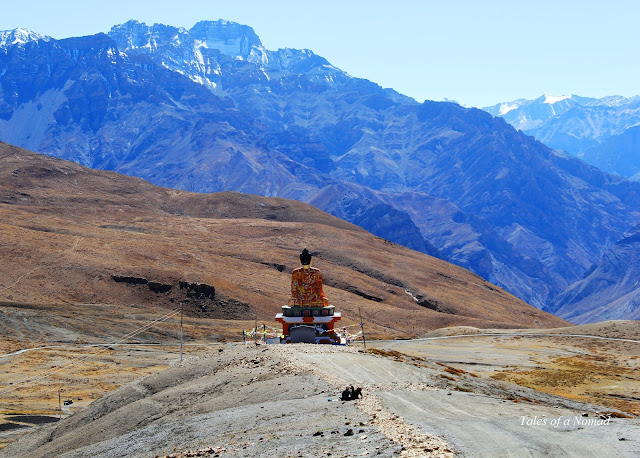 Komic village at 14,830 feet is apparently the world’s highest village accessible by a motorable road. Tangyud monastery is a fortified monastery with bright colours and tall mud walls surrounding it. Built in early 13th century, the monastery follows Sakya sect of Buddhism and has a large courtyard apart from a colourful prayer hall. The monastery was restored after a natural disaster that happened in 1970s. 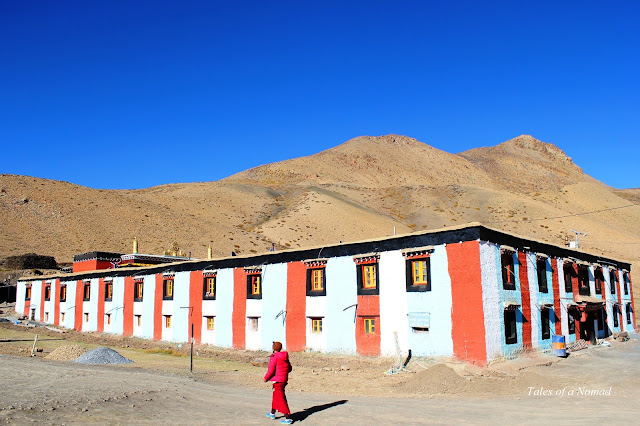 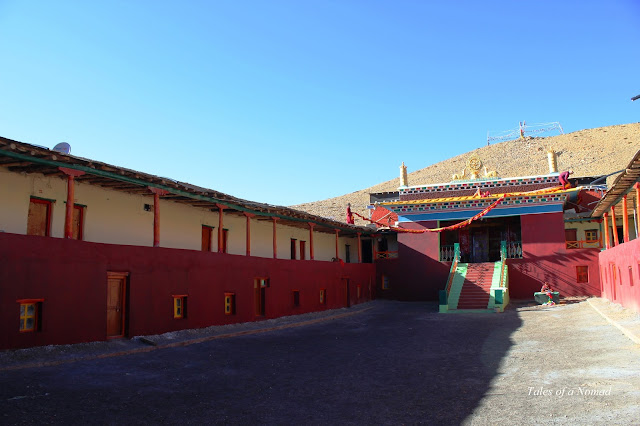 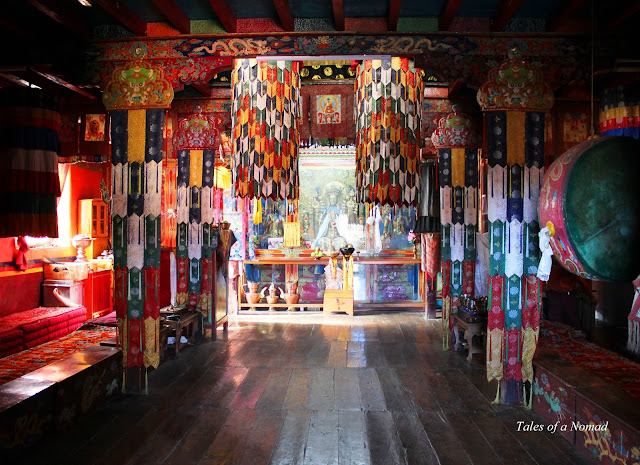 Geyu, also referred as Gue is a secluded village in the southern region of Spiti, closer to Kinnaur district. Though monastery isn’t a functional as yet, the village is popular for the 550 year old mummy of a Buddhist monk. The well preserved mummy is kept in a glass enclosure inside a small structure next to the monastery. As per the locals, the mummy was discovered by the Indo Tibetan Border Police near the village of Geyu in 1970s. 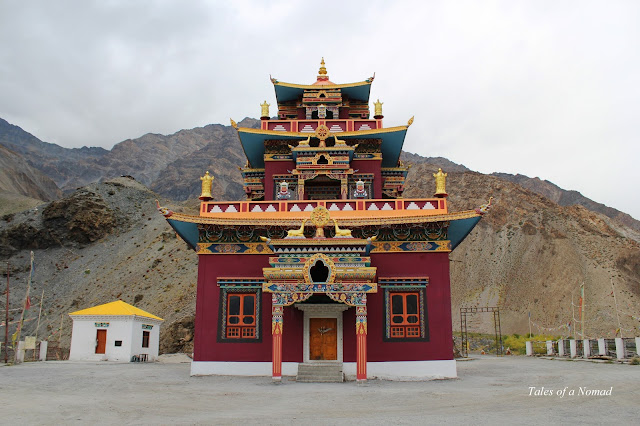 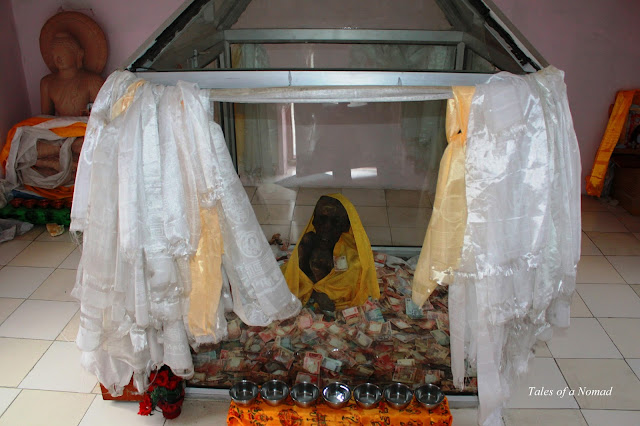 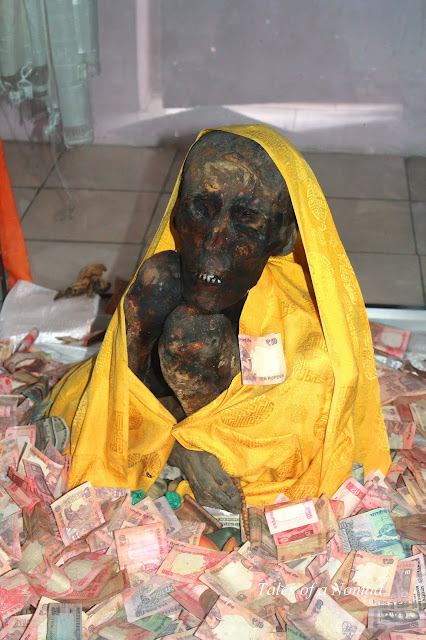 Located in Kaza town, this new monastery is a colourful one which follows Sakya sect of Buddhism. There are prayers held every day in the morning and evening. The colourful interiors have a peaceful ambience and the morning prayer with various instruments played by the monks enhances the serenity of the prayer hall. 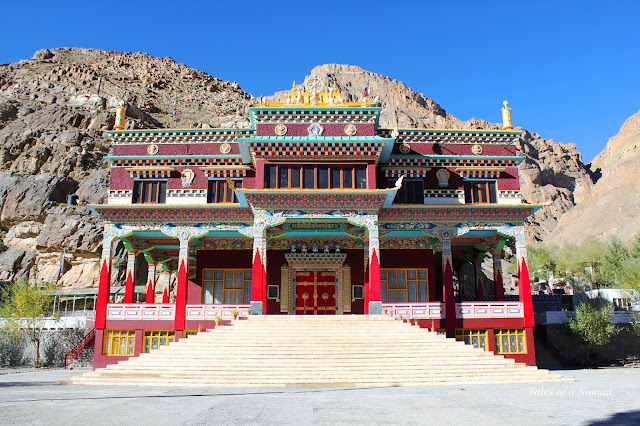 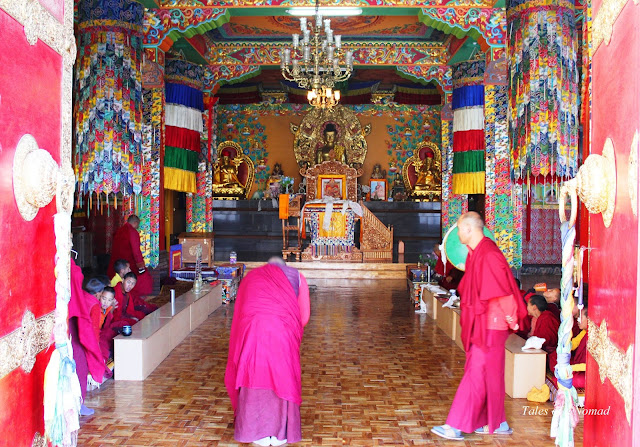 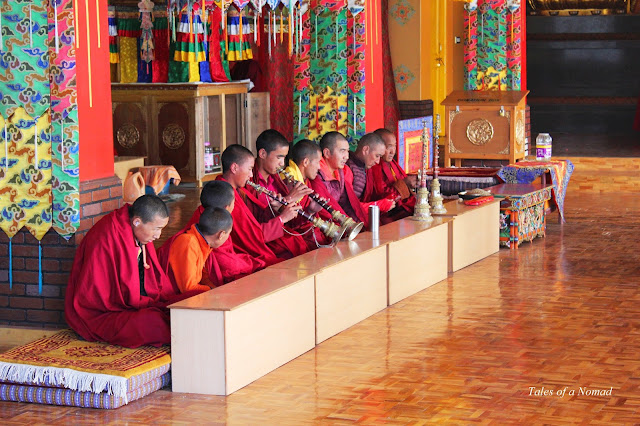 The nearest airport is at Bhuntar in Kullu, 253 Kms away. The closest railhead is at Kalka, 484 Kms away. There are daily buses from Shimla to Kaza and from Manali to Kaza (except during winters).

Kaza has numerous hotels, guest houses and hostels. I stayed at Zostel Spiti. There are small cafes or restaurants near most of the monasteries which offer Indian and Tibetan food.
Posted by R Niranjan Das at 10:10 AM