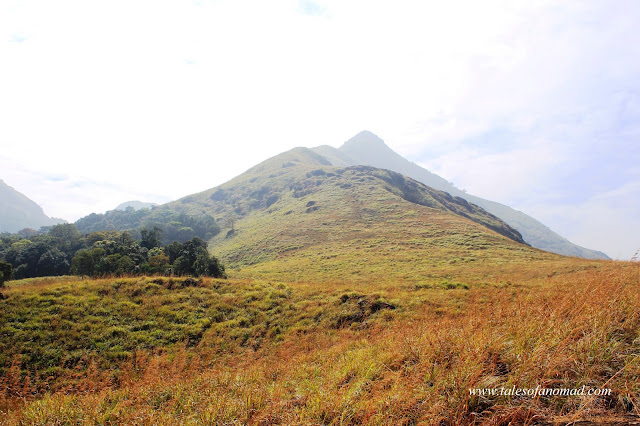 Tea gardens showed up as I crossed Meppadi and rode to Chembra, the highest peak in Wayanad (6890 feet above sea level). Amidst the green landscape, Chembra stood tall and could be seen from a distance. The road turned bad as ascent became steep. It led to the check post, which is a couple of kilometers before the entry gate to the trek. The officer was quite patient enough to explain in detail about the charges and other mandates.  From the entry gate one can either stroll through the tea gardens and the small forest stretch until the watch tower, or can trek all the way to the heart shaped lake. Bought a ticket for the trek and rode ahead to the entry gate. The authorities have made sure that people do not litter and they take a count of plastic bottles and wrappers you carry. One has to deposit Rs. 100/- (refundable) while entering the gate.

The initial trail of half a kilometer went past the small ‘thirst quenching’ stalls and the tea plantations into a shola forest. The trail meandered its way past tall trees to the watch tower. The tower offers panoramic views of the hills, plantations and the tiny towns in the distance.  From the watch tower it is a 2.5 Kms trek to the lake. 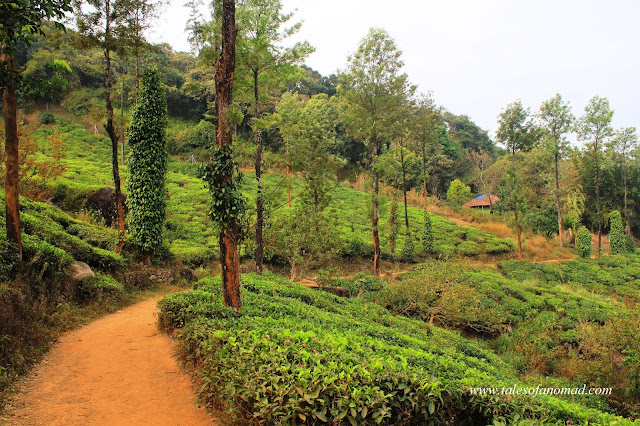 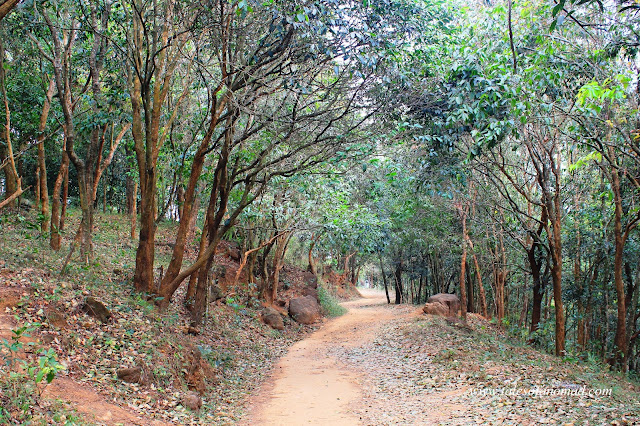 Though a mud trail, it was a slow ascent initially with protruding roots and stones.  I had started late, and it became warm as I trudged further. The trail soon became narrower and turned into steep climbs without a cue.  The forests gave way to clearings and the mud trail to a rocky gradient.  As expected, panoramic vistas showed up intermittently.  Without much difficulty crossed the first hill with short breaks to enter open grasslands. Being a holiday (Republic day), the number of trekkers were huge. There were smiles, helping hands and shared water bottles all along the trail. I could hear the lime soda seller cry out near the entry gate despite being a hill away. 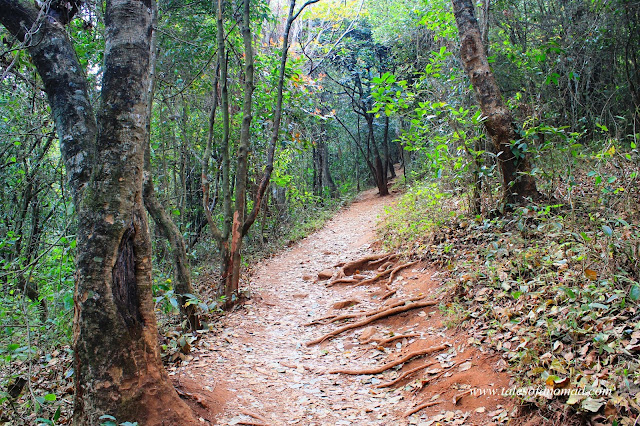 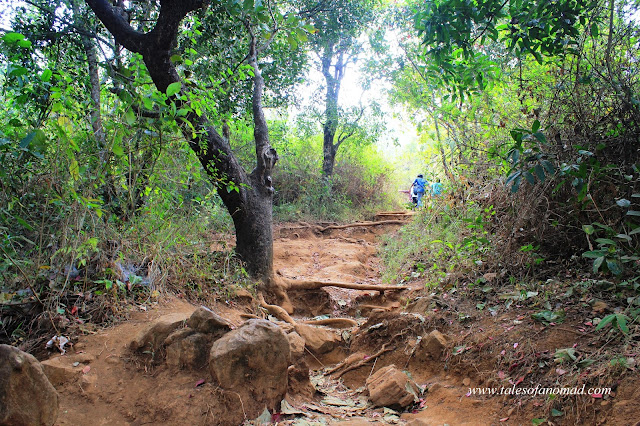 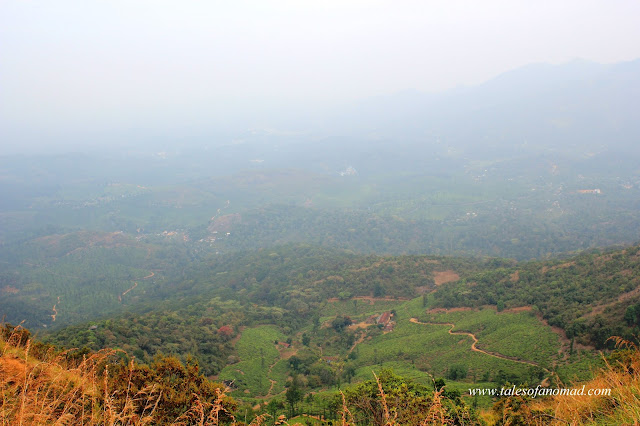 The second hill beyond the open lands was almost devoid of forest patches.  The trail that goes up can be seen from the plains.  This stretch was rockier, but a moderate climb in comparison to the first hill. The ascent ended at another small plain which led to the lake and the base of the actual Chembra peak. 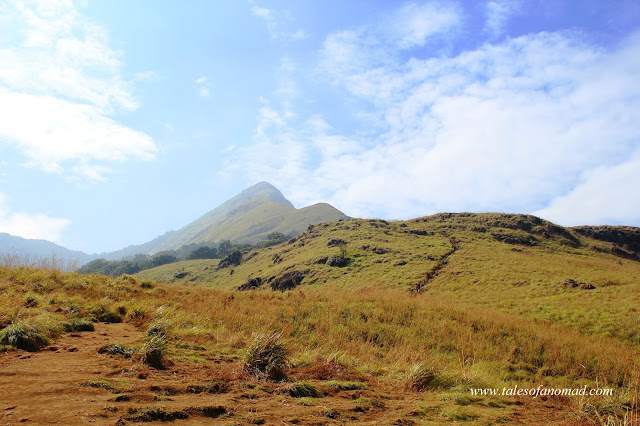 Though not the best time to enjoy the lush greenery of the surroundings, Chembra peak definitely looked beautiful with with its green carpet of grass. Though not a large one, the serene heart shaped lake is believed to have never dried up. It remains placid at the base of the peak, creating ripples as the wind blows. Visitors aren’t allowed to take a dip in the waters. The shape of the heart can be visualised only from a particular point, which lies to the left of the lake. 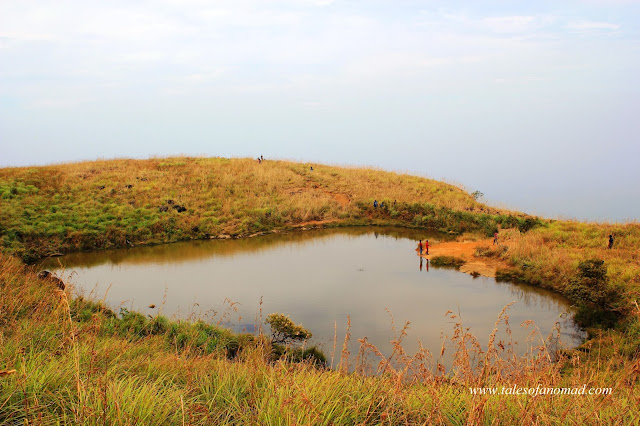 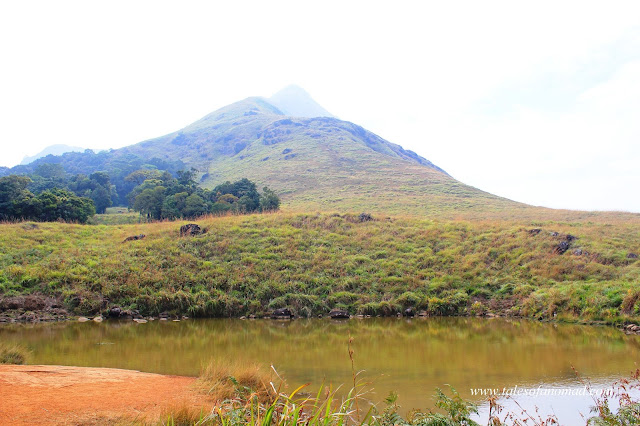 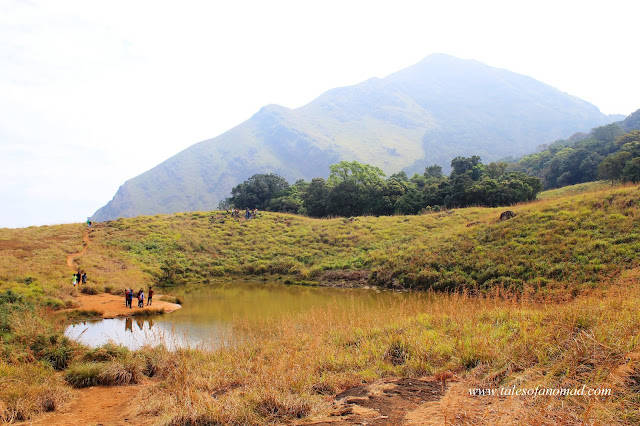 I chatted up with a young guide, Sreekanth, who mentioned that the trek further up to the summit of Chembra is not permissible any more. Reasons being a few migratory who have made the peak their home (intrusion by humans could make it vulnerable) and rumoured presence of Maoists in nearby areas.

Apart from the lake, the vantage points here offer magnificent views of the valleys, plantations and hills. Fellow trekkers sat down to enjoy the views after the long climb.  I strolled around for a while soaking in the beautiful vistas. The sun blazed over us as I walked back to the trail and gazed at the route that would take me to the base. It always feels wonderful to look back at the path you have taken all the way up, both figuratively and literally. 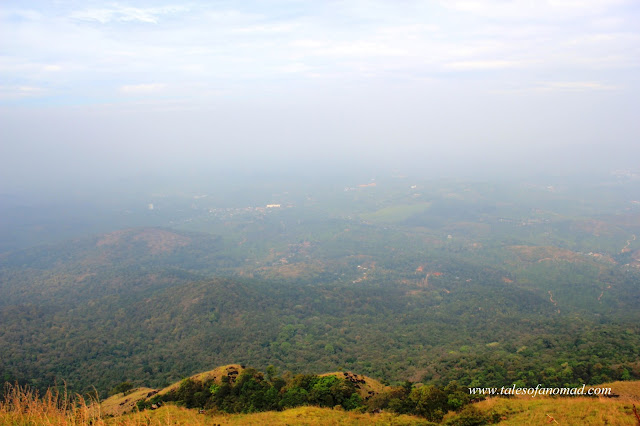 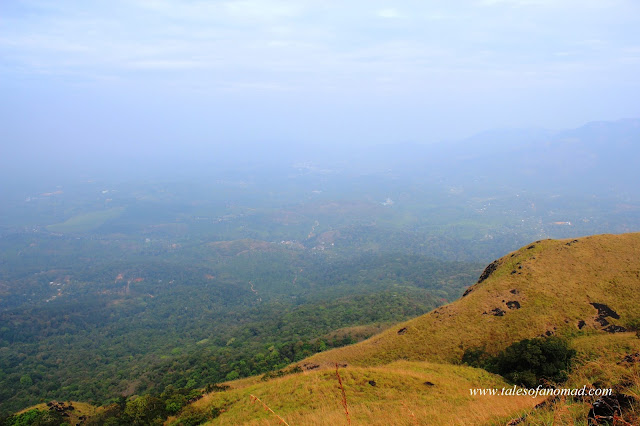 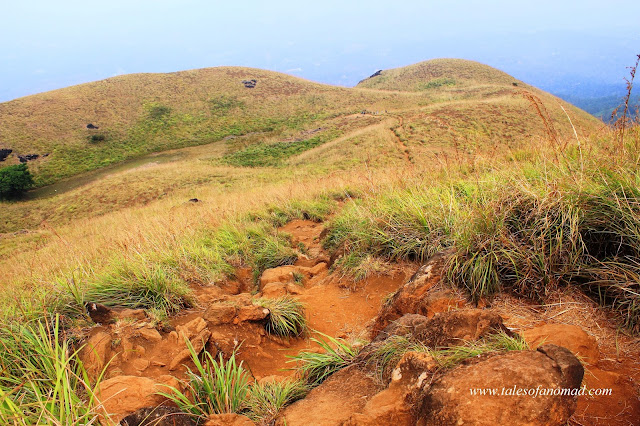 As always, the trek down was more precarious with the muddy trails turning slippery.  While the first hill was a quick walk down, the second hill (first one while climbing) was a bit tough with mud, rocks and protruding roots. Gulped a few glasses of cold butter milk at the gates to refresh before heading back. 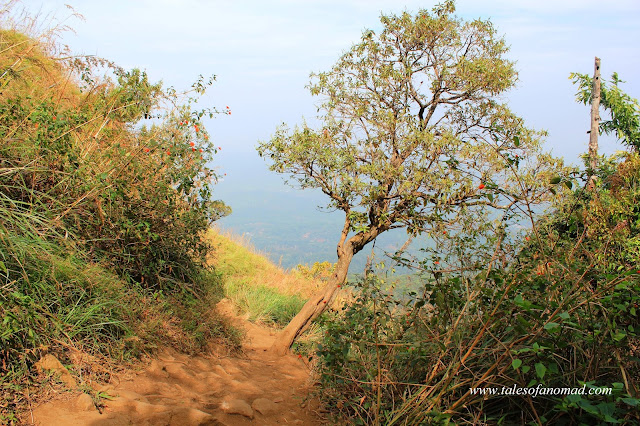 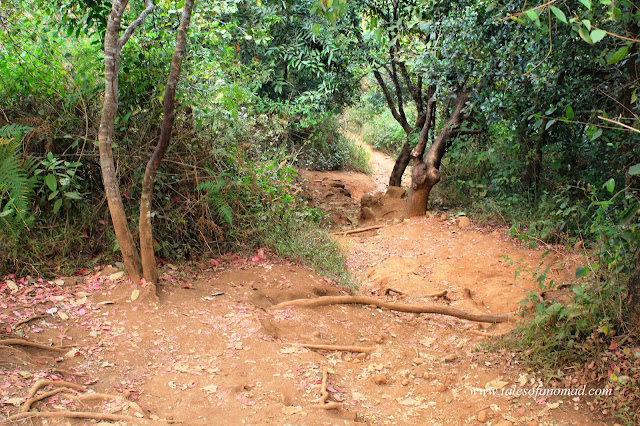 A moderate trek, it took about three and a half hours for me to return at a leisurely pace.

8 Kms from Meppadi. 21 Kms from Kalpetta.
Nearest airport and major railway station is at Kozhikode (80 Kms fom Meppadi). There are frequent buses till Meppadi from Kalpetta.