Periyar Tiger Reserve, Thekkady- A Walk into the Woods 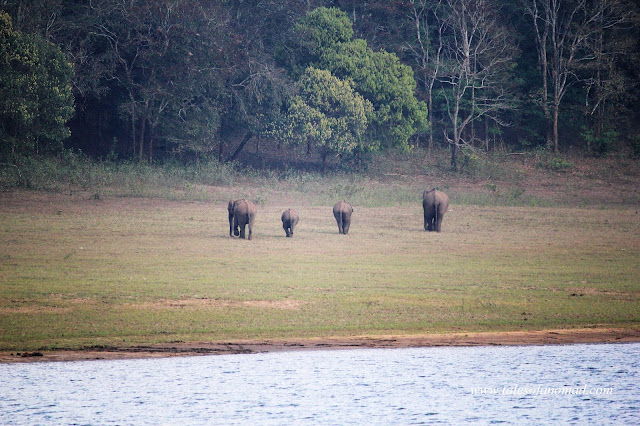 The first frame that comes to mind when we talk about Thekkady is the serene Periyar lake with protruding stumps and boats dodging past them. That frame has held its charm over the years, with people from world over frolicking the reserve to soak in the natural surroundings, to gaze at the gorgeous landscape and to have a closer glimpse of its endemic flora and fauna. Cosily nestled at a height of more than 1700 meters in the Cardamom hills of Idukki district and bordering Tamil Nadu, the Periyar Tiger Reserve at Thekkady is known for its rich bio diversity. Sprawling over 925 sq km, this is the largest sanctuary in Kerala and undoubtedly one of the most popular ones.  It is also one of the 27 tiger reserves in the country and is home to 47 tigers.

It was a blissful ride from Kochi, past the rubber and tea plantations to Kumily, a prominent spice trading centre in the state. This border town located a couple of kilometres away from Thekkady was also my base. I had absolutely no clue about the activities at the reserve, except for the boat ride on the lake. The last ride for the day was completely booked when I rushed in an hour early before its departure at 3.30 PM. Contemplating what to do next, picked up an entry ticket from the counter to walk around the park and its information centre. A kilometre away is the entrance gate to the reserve and then a few more to reach the parking space. Infested with playful macaques, the walk to the lake is lined with incredibly tall tress which ends at the entrance gate to the lake. Though overlooking the lake, this spot only gives a glimpse of the expansive lake. There is also an information centre which details about various activities for guests apart from the boat ride.  Strolled along for a while before heading back to the ticket counter. 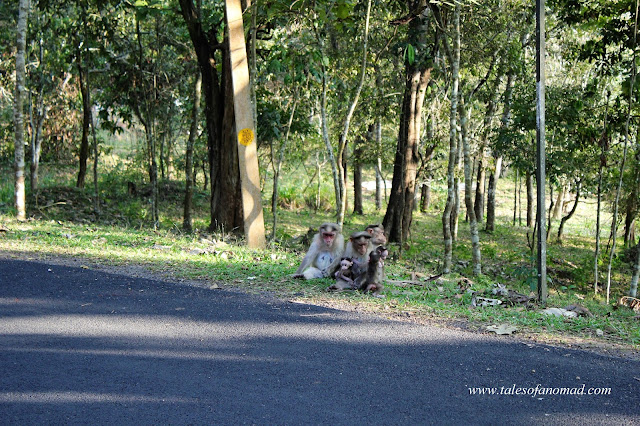 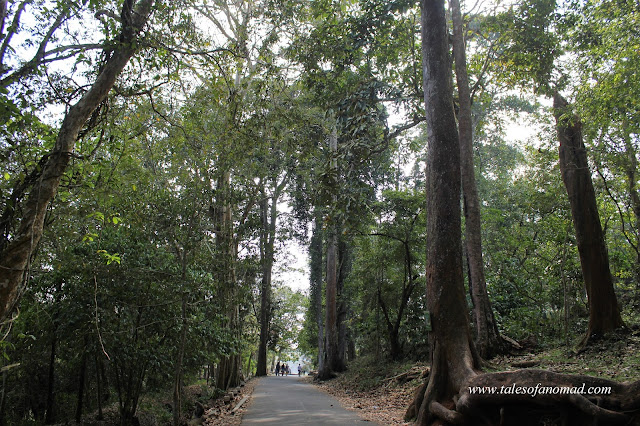 To get over the anguish of missing out on the boat ride, booked a night trail called Jungle scout. At 7 PM the group of four with a guide and forest official left on the night trail which also doubles up as a night patrol. Armed with torches and a riffle by the official (you never know what company you might have inside the jungle), we followed our guide, Madhu, as he narrated about recent animal encounters. He was quite experienced, was prompt and could discern animals in the dark by their glowing eyes. We did come to know of that soon, when he spotted a male bison at distance, across a canal. The green eyes shone bright when we flashed the torch. Spotted many sambars all along as they grazed together as a herd. They posed for a while before shying away into the darkness of the night. A wild rabbit ran away when the torch flashed and hid in the bushes before running further away. Madhu did mention about seeing elephants in the evening along the same trail, but was surprised where they had disappeared in a couple of hours. All that we could see were the dungs. More nocturnal species popped up as we went walked deeper. A pair of porcupines hustled and trod into the bushes while a night jar stood still for long until we were quite close to it. ‘’Where did the elephants go?’’, repeated Madhu as he suddenly stopped. ‘’Bisons’’, he said. This time it was a huge herd and they happily grazed a few meters away from us. They had blocked our trail and we couldn’t go ahead unless they moved. Madhu tried his best to chase them away with sounds and they lethargically walked away. More elephant dungs showed up, but no sign of the pachyderms as we got on to the road and headed back. Apart from the sightings, the twinkling sky made the night all the more beautiful. 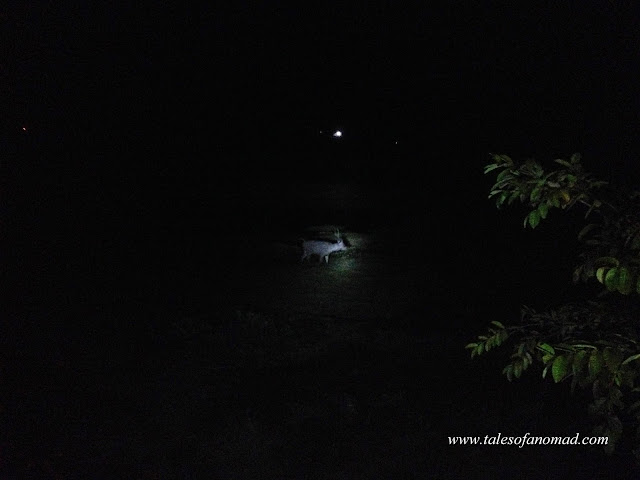 I headed next day early morning to the park entry counter to buy tickets for the first boat ride of the day. This boating activity is quite a chaos here at Periyar Tiger reserve. People had already lined up before sunrise to buy entry ticket and then rushed to the entry gate which was already queued up with vehicles. The vehicles headed to the parking lot and then it was a mad rush to the boat ride ticket counter. Unless you have an organiser who would pre-book or do all the running for you, please sharpen your running skills before heading here. Despite all the running, the gates closed as tickets for the first ride got sold out soon. As I stood in the queue waiting for the next ride, the official came up to squeeze in a couple of people as there were a few empty seats. Luck favours the one who can run fast. The boat left shortly as visitors wrapped in life jackets craned their necks and cameras were all set for a burst of clicks. The Periyar lake has always looked charming with its serene waters and protruding stumps. The boat meandered its way past the stumps creating ripples. Numerous birds such as woolly necked stork, cormorants, herons, kingfishers, lapwings and herons fluttered all over, stood still in the waters, sat on stumps and searched for their breakfast as we went past them. The guides on board were quite good as they kept sighting various birds. As we went deeper, the expansive lake opened up with thick woods and hills in the background to form a beautiful frame. 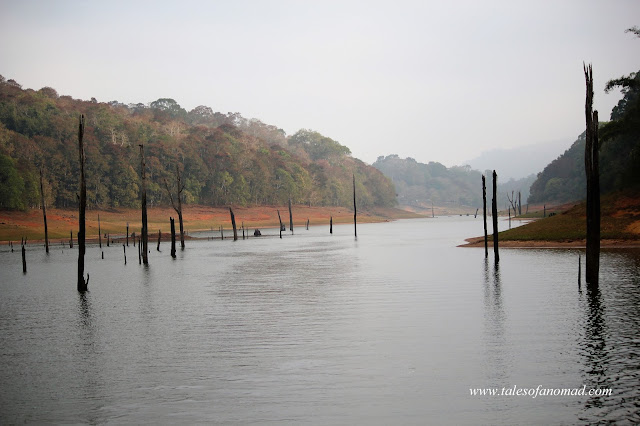 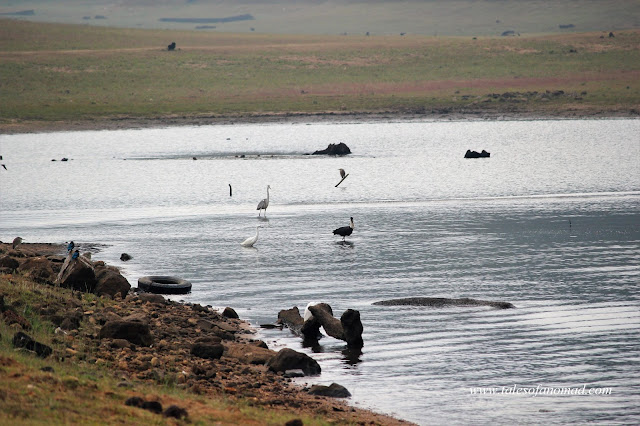 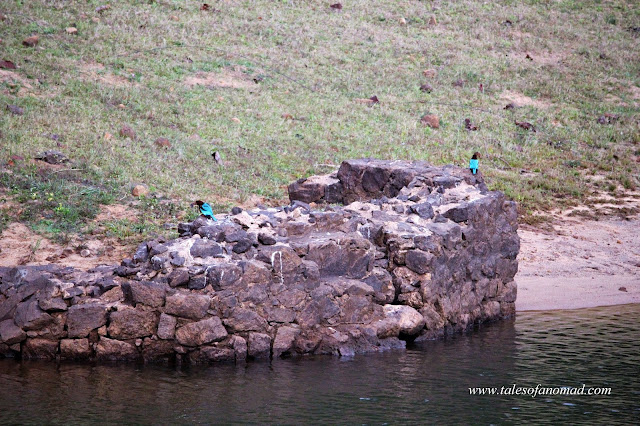 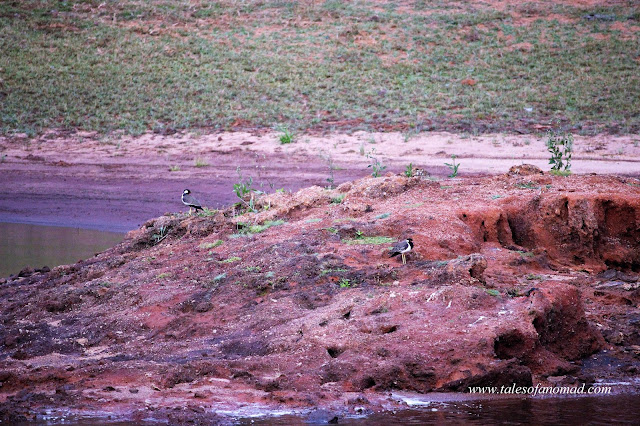 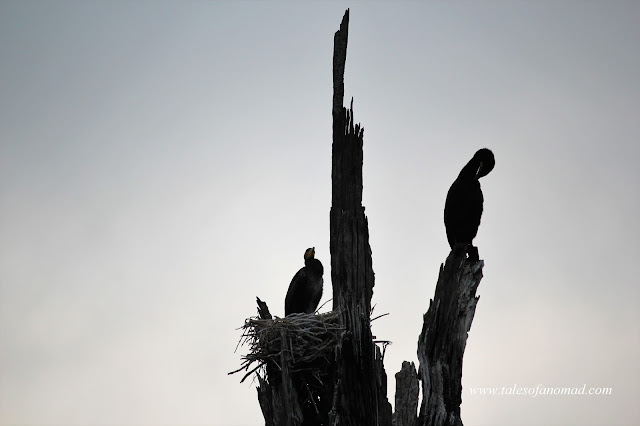 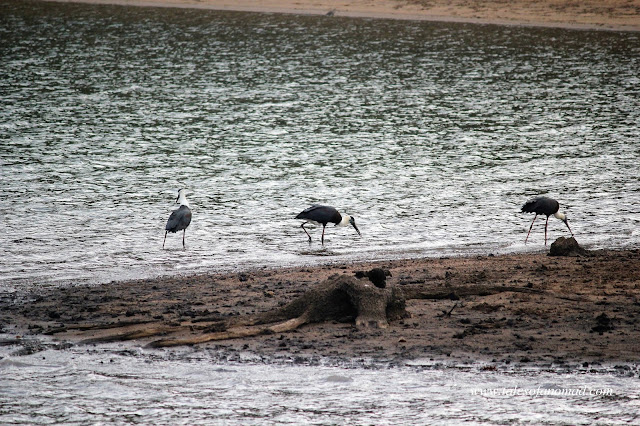 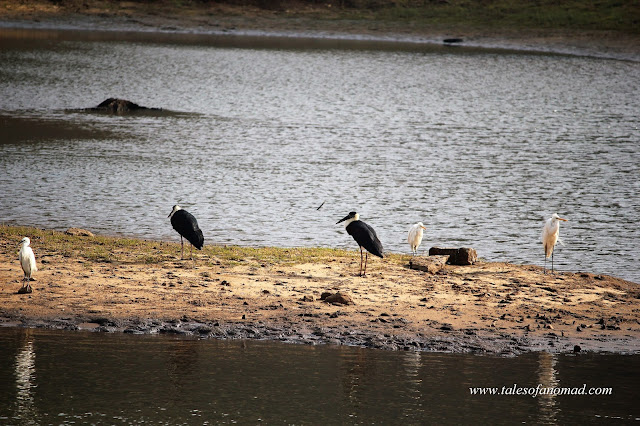 A pair of otters swam playfully in the waters for a while but dived away into the depth of the lake as the boat went closer. As the boat meandered along, we saw a family of four elephants walk down from the woods to the lake. The elephants nonchalantly drank water and grazed as the boat stopped and cameras went berserk. It was undoubtedly one of the most beautiful scenes I have ever seen while on a wildlife safari. The two adults and two kids stood by the bank for long and were unperturbed despite the presence of boats. The boats left shortly and in a while we spotted a huge herd of bisons grazing away quietly. The elephants were still there when the boat returned, but walked away into the woods shortly. The otters had gone ashore, and it wasn’t just two this time, but a pack of them playing with each other under the bright sun. We were almost close to the landing area when one of the guides spotted a herd of wild dogs (dholes) feasting on a carcass. That was a first time for me and a great way to end the ‘lucky’ boat ride. 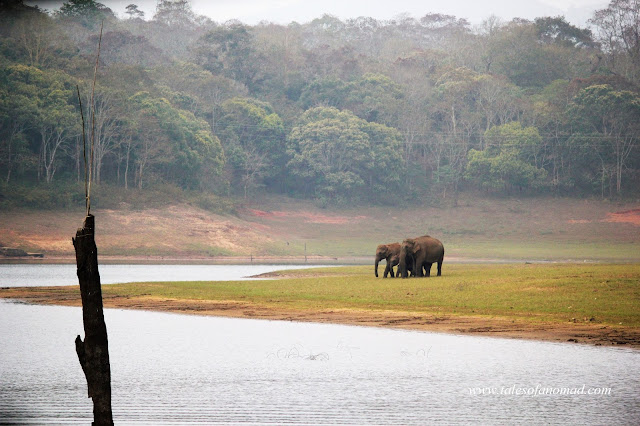 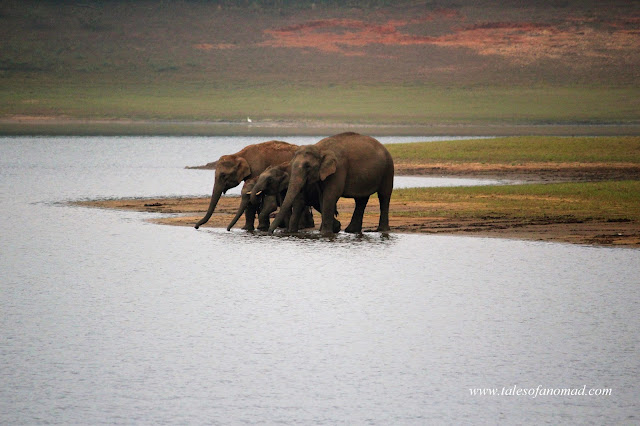 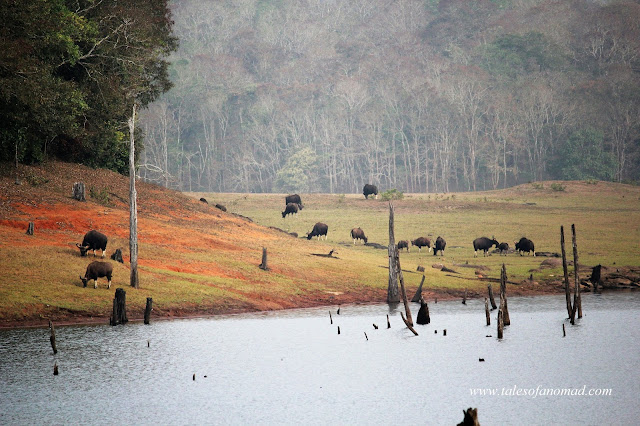 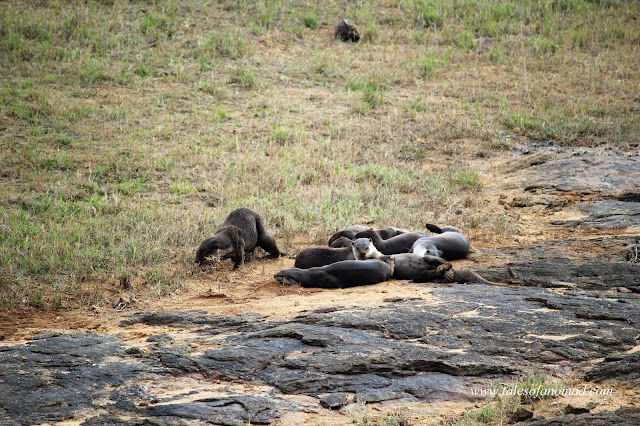 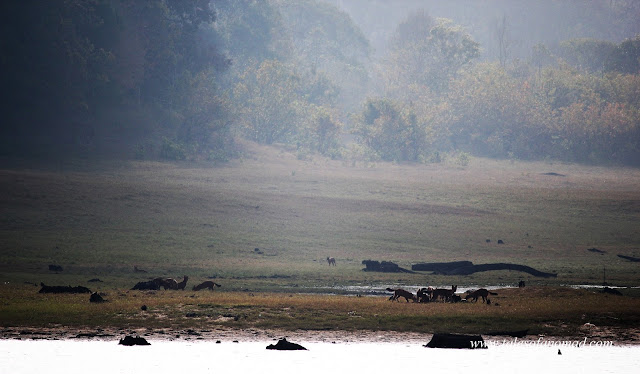 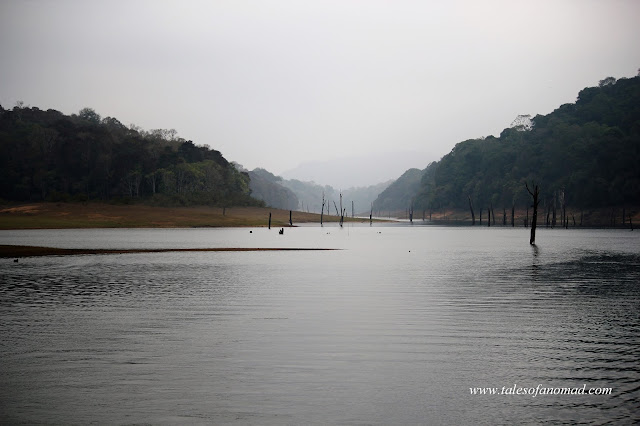 Despite the lovely jungle experiences, I was hungry for more and went on Green walk, an activity where the guide takes you on a trek through the forest. A walk through the forest is definitely the best way to know it better. The long 3-hour trail took us through the buffer areas laced with dry fallen leaves, percolating sunlight and tall trees, mostly teak and sandalwood. Our guide Prabhu, who hails from Paliyan tribe, made sure the trek was an interactive one as he explained about the forest, trees and animal sightings. Birds such as parakeets, jungle mynahs and many others chirped as we made our way through the dense forest. Prabhu was quick to spot a lone sambar (stag) standing between two trees and staring at us. As we went closer, trampling the dry leaves, it slowly moved away. Shortly, a huge herd of sambars followed the stag and disappeared into the woods. Sambars are usually found in groups, said Prabhu as we followed him further. He stopped without a cue and from the bushes a mouse deer ran in a flash. We hardly had a glimpse of it, but were lucky to sight it as they are mostly nocturnal. We spotted many tiger wasp nests dangling from branches and a few playful Malabar giant squirrels. Prabhu did get a call from another guide mentioning about an elephant sighting, but we couldn’t find any despite waiting patiently at many places. As we neared the exit, a Malabar hornbill flew and perched itself high on a branch. A few trees away a grey malabar hornbill was seen fluttering around. Just before the end of the trail, an angry niligiri langur made its presence felt as it chattered for a while. The trek ended as we passed through a tribal village, where a few gleeful children flashed innocent smiles as they happily posed for my camera. 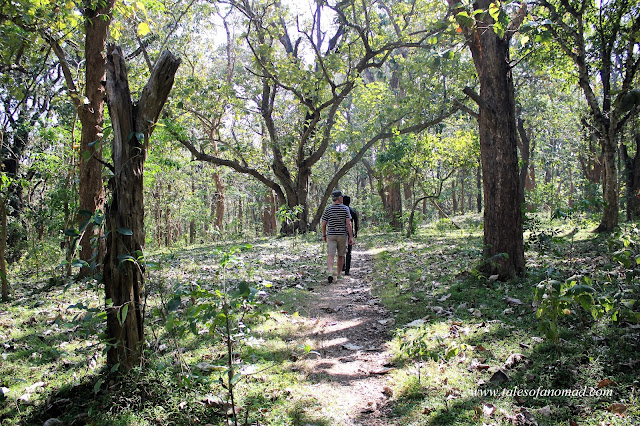 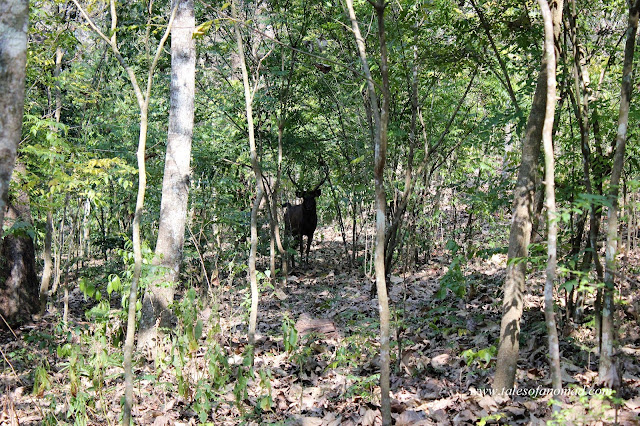 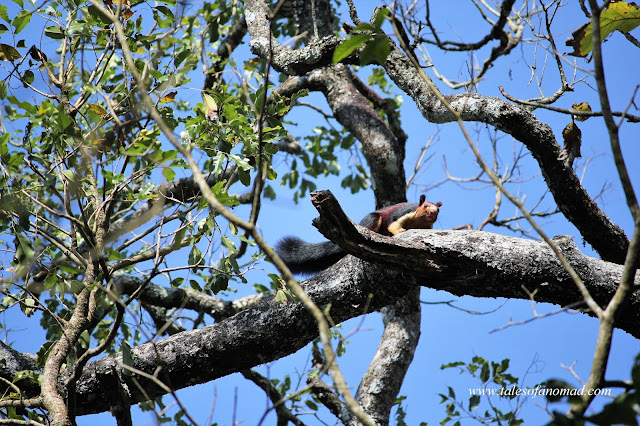 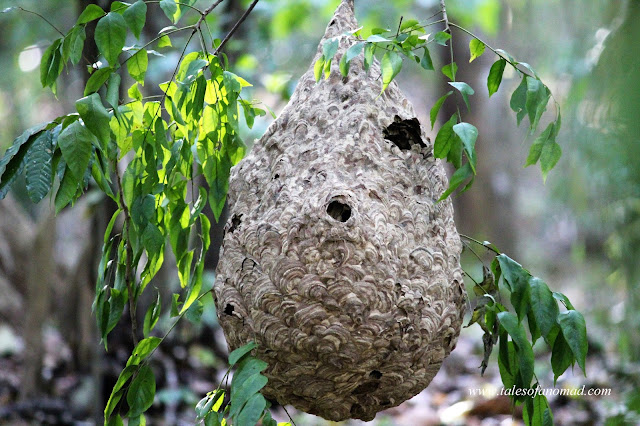 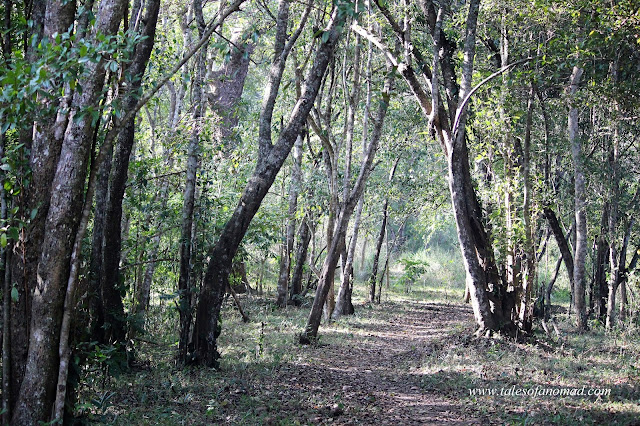 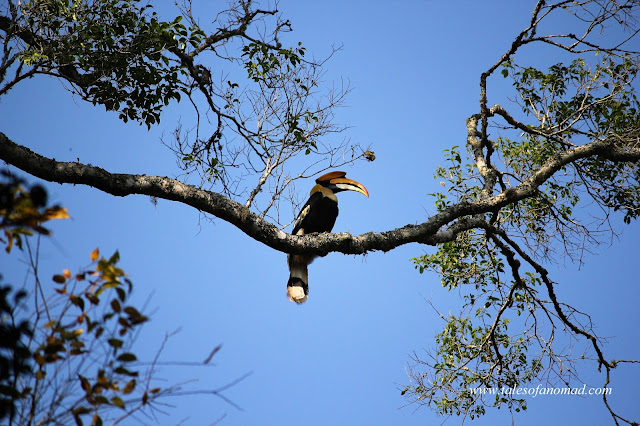 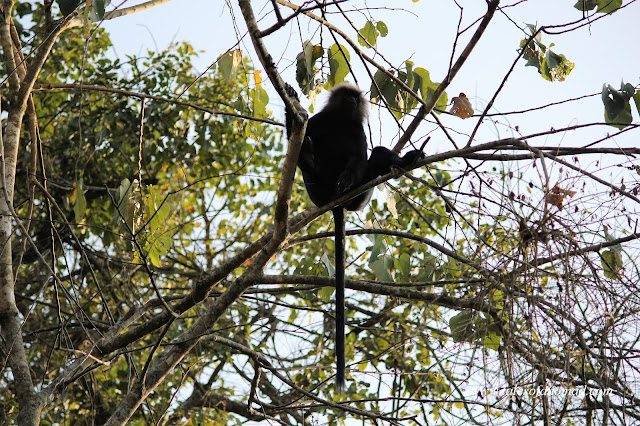 My visit to Thekkady ended with a performance by the Manan tribe, the largest tribe that hails from the surroundings of the reserve. Apart from the six vigorous dance performances, the show also gives an insight into the tribal lives and the story behind each performance. 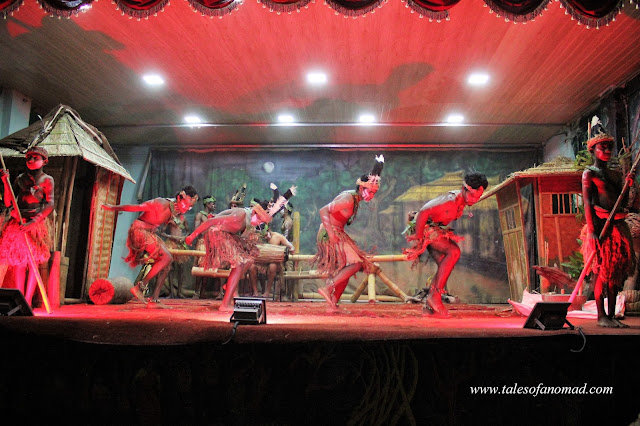 Eco tourism at Periyar Tiger reserve offers more activities such as bamboo rafting, bamboo grove, tiger trail, border trekking, nature walk etc. Wildlife sighting is all about luck and good naturalists. I was lucky to have both to an extent on all three activities.

Thekkady and Kumily are known for its spices and there are numerous shops selling a variety of them.

Idukki district, Kerala.
164 Kms from Cochin. Nearest airport is at Cochin (190 kms). Closest rail head is at Kottayam (118 Kms). Kumily is 4 Kms from Thekkady and is well connected by buses to Cochin, Kottayam and Thiruvananthapuram.

Explore Kerala cuisine as they are easily available at most restaurants. However, most of them also provide Chinese, North Indian and Continental fare. Thekkady has numerous resorts and plush hotels apart from options such as camps in the jungle organised by Periyar Tiger reserve. Lake palace on an islet inside the reserve is a luxurious option. If you are keen on budget options, head to Kumily. I stayed at Hotel Sithara International, a good budget option in Kumily.
Posted by R Niranjan Das at 7:18 AM