The Mughal Wonders of Lucknow...!!

As soon as I stepped out of Lucknow railway station there were a swarm of cycle rickshaw drivers ready to take me around the city. Most of them put forward a complete package of taking me around the Mughal quarter in an hour which I was not keen on. However, I just wanted to be dropped at the beginning of the Mughal quarter and then roam on my own. After a lot of haggling, I was on a cycle rickshaw wading through the congested roads to that section of the city that has some magnificent structures of the Mughal era. After getting off the rickshaw at the entrance of Bada Imambra I hired another rickshaw for Rs.50 which would take me to Chota Imambara, Clock tower, Rumi Darwaza and Jama Masjid. My rickshaw driver also  turned out to be a good guide as he passed on many information with regards to all the beautiful structures.

Rumi Darwaza was the first monument that I passed through. Standing like an imposing gateway it stunned me with its impressive Awadhi architecture. This spectacular work is undoubtedly an architectural splendour. My guide was quick to point out that you can see only one door from one side, but once you pass over to the other side you can see there are actually three doors. Built in the late 18th century by Nawab Asaf-Ud-Dowlah, this 60 feet tall structure which is a  symbol of Awadhi and Mughal architecture was built on the model of a similar gateway in ancient Constantinople.


We cycled down further to the Chota Imambara, one of the most extraordinary Mughal structures I have ever seen. I was so awed by its exteriors which had beautiful Arabic calligraphy all over and a gleaming golden dome on its top. The interiors of Chota Imambara swept me off my feet with exquisite chandlers, colourful wall coatings and glittering mirrors. I kept gawking at the wonderful architectural designs for a long time. It is definitely a visual treat. Also referred to as Hussainabad Imambara, this exceptional monument was built by Mohammad Ali Shah.  When lit up on auspicious days, this structure is a magical sight. 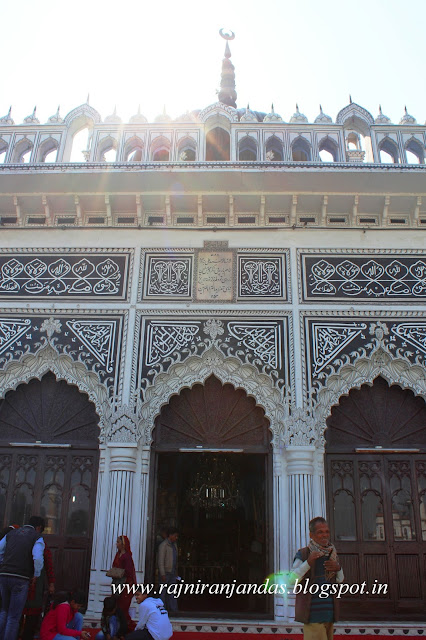 Jama Masjid was not earlier included on the itinerary mentioned by my guide. However when I mentioned about it, he was more than keen to take me to this massive mosque. I had never been to such a huge and elegant mosque before. The whole mosque is built on yellow sand stone. The minarets, the pillars, the arched domes, the main entrance and the interiors of the mosque are in true Mughal style. I especially loved the colourful interiors. The serenity inside the mosque made me stay a bit longer.

The tallest clock tower in India is situated in Lucknow. Constructed in the late 19th century by Nawab Nasir-ud-Din Haider, this elegant looking 221 feet tall clock tower also adorns the most expensive clock of those times. My guide pointed out that there is a metal bird on top of the tower which turns its direction to indicate the wind flow.

From the clock tower we came back to our starting point, the Bada Imambara. This imposing structure is a landmark in Lucknow. Built in the late 18th century by Nawab Asaf-ud-Daula, the Imambara was a part of the relief measures during the famine that struck Awadh.  An elegant looking gateway leads to a huge open garden area which houses the Bada Imambara and Asafi mosque. It is also referred to as Bhool Bhulaiyya because of the numerous zig zag passes inside the structure that leads to a series of labyrinths. The inside chambers and hallways look stunning with its ornamentation and the corridors are absolutely a maze. Asafi mosque with numerous steps, minarets and domes look equally grand and gorgeous and is frequented by Shia Muslims for prayers.


Half a day was not enough for me to cover the whole of Mughal quarter and I did skip a few like Chattar Manzil, Residency etc. However the few structures that I had a glimpse of were astoundingly beautiful, intricate and wondrous. My biggest exposure to Mughal architecture before visiting Lucknow was The Taj. Now after visiting these magnificent Mughal architectures of Lucknow am awed as every structure they have built (even the small minarets) are absolutely spectacular in all means. Absolutely great creations.

Signing Note- A day with the Mughals was architecturally memorable...!!