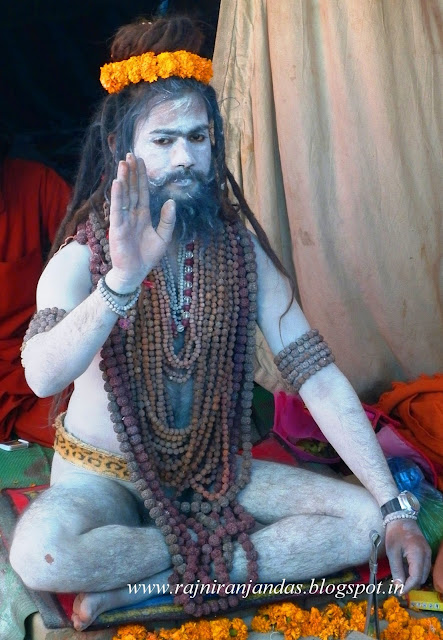 It all began when Lord Vishnu in the form of Mohini ran off with the pot (kumbh) carrying nectar away from the devas and the asuras (The fight between devas and asuras was to have the nectar to attain immortality). On the way four drops spilled over at Prayag (Allahabad), Haridwar, Nashik and Ujjain. Prayag is considered the biggest of them all due to the confluence of Ganga, Yamuna and the mystical Saraswathi. Even after thousands of years people including pilgrims, sadhus and foreigners descend upon the Kumbh mela site and have a dip in the waters to attain salvation or moksha. Considered the biggest religious gathering in the world, Kumbh mela happens once in twelve years at each of the four places. Ardh kumbh mela takes place once every six years at Prayag and Haridwar. Prayag also hosts a magh mela (a miniature Kumbh mela) every year during the months of february and march. The Kumbh mela of 2013 in Prayag is called the Maha Kumbh mela as this comes after 144 years (after 12 cycles of 12 years each). I do not think anyone who is alive today would be witness to the next Maha Kumbh mela. Shouldn't that be the reason to head to The Kumbh?

So I was aboard the train to Allahabad and after an engrossing two days reached the confluence. The road to the confluence had a plethora of activities like exhibitions, magic shows, adventure parks, eateries etc. Elaborately spread over more than 50 sq. km., the mela area next to the sangam (confluence) is heavy on security, well directed with boards, markings, temporary lanes, tea stalls, numerous pontoons to cross over to the other bank, confusing intersections (all look like one another), shops selling everything from blankets to temple paraphernalia, hundreds of camps, thousands of tents and lakhs of visitors. The blaring speakers are always flowing with either devotional songs or with the names of the people who have been separated from their family. The place is quite windy and can leave you covered with white powdery sand. Areas close to the waters have been covered with hay and sand sacks to avoid slush. It is a huge colourful crowd with people from all walks of life flowing through all possible ways like the Ganges. You have to wade through people to move ahead or else be ready to get pushed and elbowed all along. The crowds come in huge families, and with similar attire they are so easily distinguishable. Fathers, mothers, children, uncles, aunts, nephews, nieces, grandparents, brothers, sisters, wives, husbands, in-laws... there is no member who is not a part of this holy dip.


This largest religious gathering is an electric synthesis of pilgrims. Visitors include pilgrims from different parts of the country, celebrities who have come to take a dip in the waters, politicians who have their stage set for another speech, media personnel from across the globe who have come for the Kumbh coverage, foreign backpackers who seem excited to see the congregation at the confluence, kalpwasis who have been camping under strict religious observations during the Kumbh mela period, the different akharas (sects) with huge camps, different types of sadhus in all kind of forms and attires, people seeking alms, kids posing for photographs and then stretching their palms for money and people like me who go capturing and enjoying every moment which would be memorable for a lifetime.

Undoubtedly, the most crowded areas were the ones close to the waters with people taking a quick dip and an even quicker dress change. On auspicious dates, the numbers have been quite staggering with millions taking the holy bath. The pilgrims can only wade a few feet into the waters as the access is limited with blockades extending along the whole length of the bank. Security on boats are also placed next to the blockade after every 100-200 meters. Visitors also give offerings to the rivers in the form of flowers and coins. Once the crowd moves out by late evening, young boys throw magnets into the waters to collect the coins. They also get chased by policemen for their act. 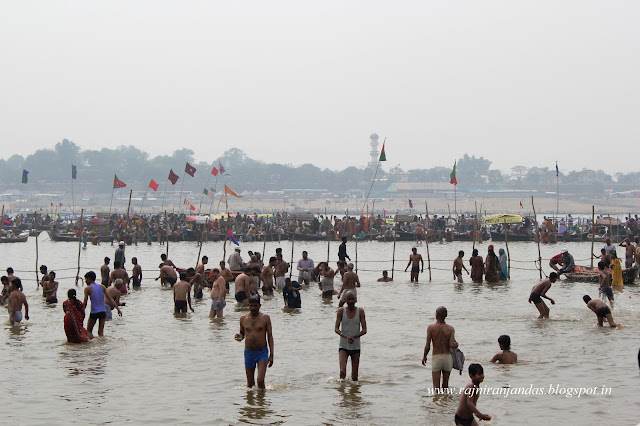 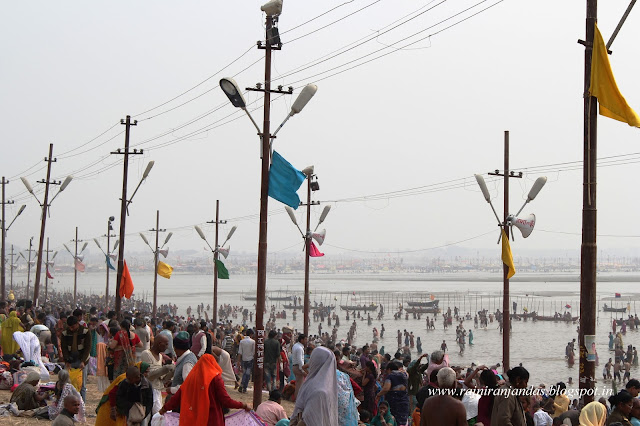 Though most people take dip near the banks, the actual sangam or confluence of the Ganga and the Yamuna (not to forget the mystical Saraswathi) is further upstream and can be reached by boat. I had an early morning boat ride on the Yamuna with a Bengali family to the exact location of the confluence. With mist, sea gulls, ghats and pilgrims, the ride was serene and memorable.  As we neared the confluence, my boatman was quick to point out and say "This is Yamuna and that is Ganga". I could very easily distinguish the green Yamuna from the brown Ganga. Also, the ripples were quite obvious making the joining of these two great rivers a very holy one. There were large number of boats that had arrived with pilgrims who had come for the holy bath. My co-travellers also got ready to take the dip and jumped over from one boat to another till they could get into the waters. The holy bath of pilgrims signified their faith, belief and the quest for salvation. Each face had a different expression which was tough to decode. Those undefinable expressions and silent prayers spoke a million words.  After being dropped off on the other side of the bank (boats are not allowed near the sangam bank), I had a long walk across pontoons and crossings to reach the main fair area. 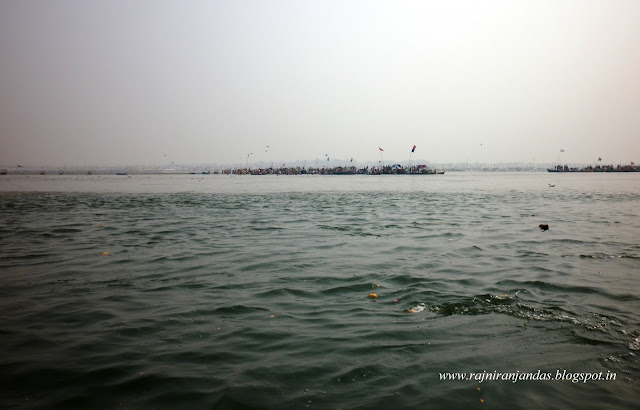 All the three days that I was at Kumbh mela were largely spent walking across the numerous camps which were active either with devotional songs or with religious talks by religious leaders or with enacting of the stories from the epics. Most camps were crowded with viewers and looked colourful at its best. Thousands of pilgrims have camped at the mela area and they are provided with rice, wheat, kerosene etc. at subsidised rates during this period. Kalpawasis form a huge part of this pilgrim crowd. Kalpawasis are pilgrims who camp at the site during the whole Kumbh period and undergo rigorous religious observations like having only one meal a day.

The other prominent tents belong to the Akharas. Akharas are sects which were initially formed by Adi Shankaracharya inorder to preserve Hinduism from external factors and internal aggression. The number which was initially 7, broke down further over a period of time and now stands at 13. Some of the well known Akharas are Juna, Agni, Avahan, Digambar, Niranjani etc. All these Akharas have separate camps which in turn have numerous individual tents. Juna Akharas are supposedly the most popular of the lot. Naga sadhus who smear ash on their body, wear absolutely no clothing and happily smoke ganja are the ones who form a part of Juna akharas. I enthusiastically spent two to three hours on all three days at their camp. It was pure fascination that made me go there again and again. With long braids, ash smeared bodies, long rudrakshas, ganja pipes and burning wood, they seemed like aliens from a different galaxy. But, they too flash symptoms of civilization. They carry one or more cellphones and some even speak English. I went up to one of them, took his blessings and he gave me a powdery ash. The fragrance of the grass was ubiquitous. There was also a naga sadhu who was flexing his body, walking on his hands, twisting his legs and performing acrobatics. As the cameras flashed, he happily smiled at them and performed more for the crowd. Must say he has one extraordinary body. There was a huge gathering of people with shaven heads, ceremonial threads and little clothing who were performing certain rituals and were being led forward by the saints from Juna Akhara. Supposedly, they were undergoing rites to become the next Naga sadhus. There was extensive media coverage for the same. 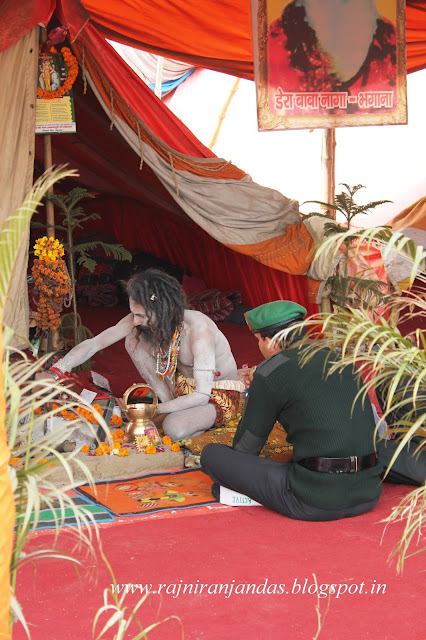 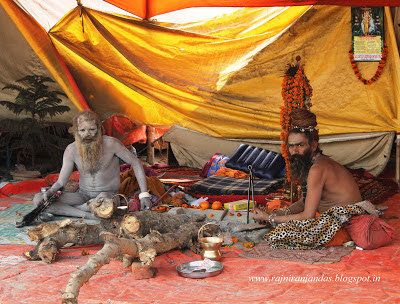 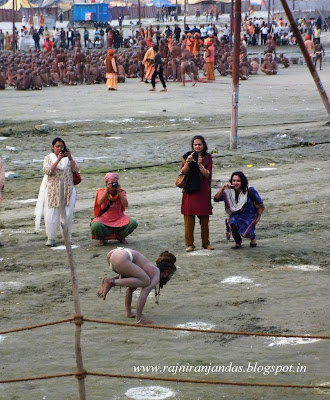 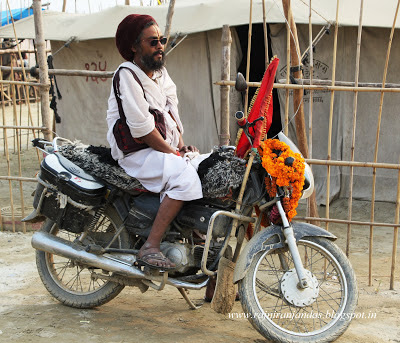 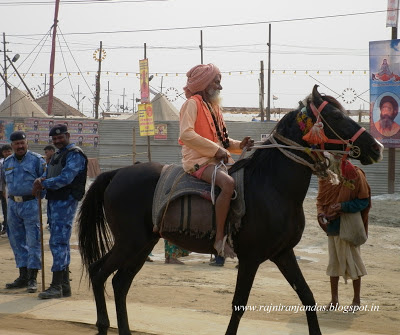 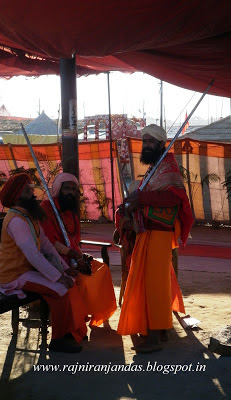 If Kumbh mela is colourful and vibrant during the day, it gets bright and beautiful as the dusk sets in. The whole place is well electrified and my evenings by the confluence were serene. As the sun sets, the rays spread itself onto the flowing rivers creating a gorgeous picture. It becomes colder, the crowd gets feebler, the yellow light from the electric lamps emanates everywhere and pilgrims return back with a content, hopeful and a peaceful mind on their road to salvation. 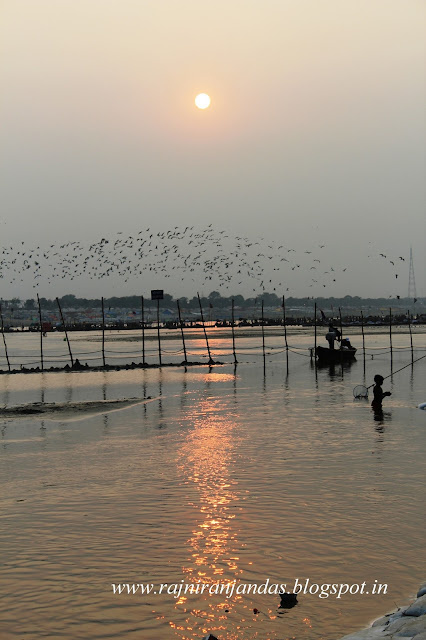 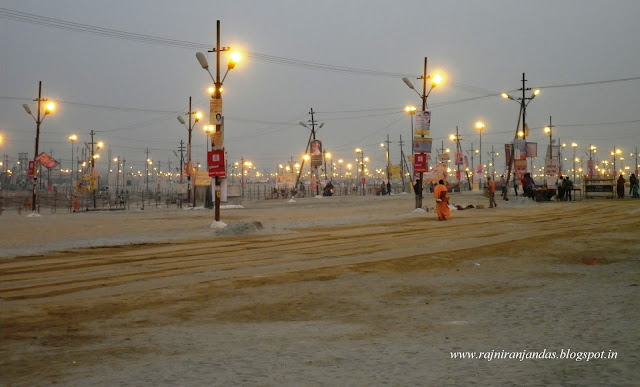 No photographs or visuals or writings can explain the festival to you. The largest religious gathering in the world has to be visited in person to see, to smell, to touch, to hear, to feel and to experience its moments. 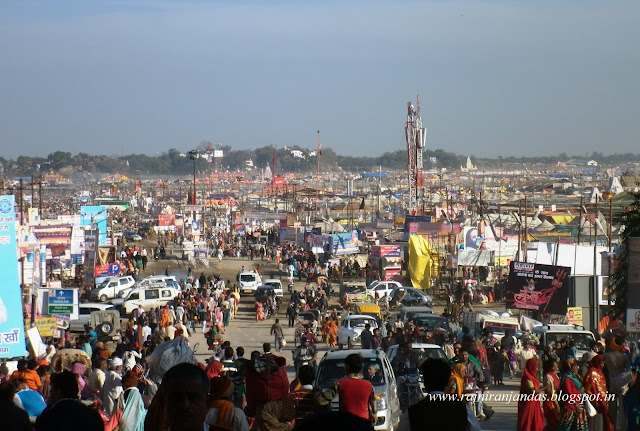 Signing Note- The Kumbh Mela is all about faith, blind faith...!!
Posted by R Niranjan Das at 12:06 PM